How to Learn iOS App Development: Start With These Courses and Tutorials

Ever since the catchphrase “There’s an app for that” played on a television commercial, there’s been a strong and growing interest in creating mobile apps, especially for Apple and iOS devices. Mobile apps are used by hundreds of millions of users per day, with more than 100 million iPhone users estimated to exist in the United States alone.

As a developer, this has come with its own set of positives and negatives. Developing for several mobile platforms can be a pain, but if you’re looking to deploy across Android, Apple, and others, frameworks such as React Native and Ionic exist to lighten the load.

However, for a cutting-edge, top-quality iOS app, there's no substitute for native development in Swift. If you're looking to work directly with iOS, then this guide is for you! If you want to learn about cross-device development, then take a look at our How to Learn React Native and How to Learn Ionic guides.

In this post, I'll cover some of the best courses and tutorials available through Envato right now, and how they can boost your iOS app development skills each step of the way.

Years ago, developing applications for iOS was difficult, requiring several interlocking frameworks and languages to complete your project, primarily Objective-C and Cocoa. In 2014, though, Apple released the Swift programming language, which helped to encapsulate the large amount of code that already existed for creating apps, but transformed it into a language that was much easier to learn and implement.

Swift covers more than just iOS programming, though, allowing you to create projects for many of Apple’s other operating systems, including macOS, iOS, watchOS, and a few others.

If you’re brand new to iOS development, you’ll need to learn some basics before getting started. Mostly you’ll need a Mac to develop on, and you’ll need an Apple developer account (but only when you get to the point of launching an app).

With that out of the way, let’s dig into the first part of learning iOS app development.

When learning to build iOS apps, one thing that makes it easy to get started is that most of the learning is focused around a single language: Swift. Those already familiar with another programming language will be able to get up to speed with Swift quickly (especially if you’re experienced in JavaScript).

If you’re just getting started with Swift, though, you’ll want to get a base-level understanding of the language before using it to build an app.

The tutorial series Swift From Scratch will help to put all of the basics of the Swift programming language under your belt, and you can also use the official Swift documentation as a resource to look to if you run into any problems.

Here are some of the more crucial tutorials you should check out in the Swift From Scratch series:

Once you’ve got enough Swift down, it’s time to move on to working with iOS apps themselves.

Working with Swift doesn’t differ too much from creating iOS applications—after all, Swift is a programming language specifically for dealing with Apple platforms. To get down the basics of developing iOS apps, we’ll have to delve a little further into Swift, before getting to the creation of simple applications.

With a general understanding of Swift under your belt, next you should learn more about Swift Design Patterns. Understanding some of the core design patterns in Swift will help you to solve common issues, build reusable bits of code, and help to keep your applications looking sharp.

After looking at the design patterns, follow this course on Building an iOS App With Swift. Within the course, you’ll recap some of the basics of Swift, while also learning how to use Xcode and walking through the entire process of building a simple app.

At this point, you’ll have built a fully functional application for iOS. Next up, we’ll look at expanding into creating and understanding more advanced apps.


You’ve followed a course by this point that helped you put together a basic app, or maybe you’ve built your own simple apps before. Now it’s time to expand on that. There are thousands of different features and functions that could be part of any app, and learning them from the ground up can be difficult.

We’ll start with a look at some existing app templates with already functioning code. By using this working code and the documentation available with it, we can quickly learn how to implement a variety of features—and, just as importantly, the underlying styles that will help us to build our own.

One of the highest-rated app templates to start with is Universal for iOS. This template is a beast, covering a ton of common features such as ad displays, timelines, in-app purchases, social connections, and more. It’s a complex app, which can be daunting just because of the sheer amount of things it can do. Luckily, this app is structured well, so you can find the areas you want to research easily.

Once you’ve explored some of the core features present in applications, next is to check out some more niche templates for less general functions. You might have a specific app or industry in mind, so finding a template that’s similar to what you’re looking to build can really give you a leg up for completing more specific functions.

We keep an updated list of 15 of the best Swift templates, where you can get a look at some of the best-rated app templates for a variety of different uses.

Pick out one or two that fall into a similar vein of what you want to do, and check them out. Look at each screen that you might want to use in the future, and try to isolate the features that you think are important. Taking features from an app template and moving them into your own app can be a great way to learn about each of these pieces and how they interact with the rest of your application.

At this point, you’re getting pretty good at developing using Swift. Most applications are within your realm of knowledge, and now it’s time to delve into the more advanced cases. There are a ton of interesting things you can do on an iOS system that fall into this category, but we’ll cover a handful of the more interesting ones available.

First up is a course that helps you dabble in a variety of advanced topics, including animations, networking, and custom controls. You can check out Go Further with Swift to get started in each of those areas.

If you want to look at something more cutting edge, the course Get Started With Augmented Reality for iOS is a good place to start. It covers 3D topics, lighting, and advanced UI concepts, so you’ll be ready to create your own augmented reality apps when finished.

You could even follow the tutorial Train a Text Classification Model With Create ML to discover how to combine Swift with Create ML to build your own machine learning models.

Finally, if you’re looking to make your code cleaner and easier to understand, check out this article on refactoring your Swift code to see some of the ways that you can improve your code quality.

How Did You Get Started in iOS Development?

How did you learn Swift or iOS development? Let me know about some of your favorite resources or the path you took in the comments below!

CodeCanyon is an online marketplace that has hundreds of app templates, which make it easy to get started coding any kind of iOS app. They're a great way to learn how to code iOS apps, and if you're a professional coder, they're a great way to jump-start your next app project. 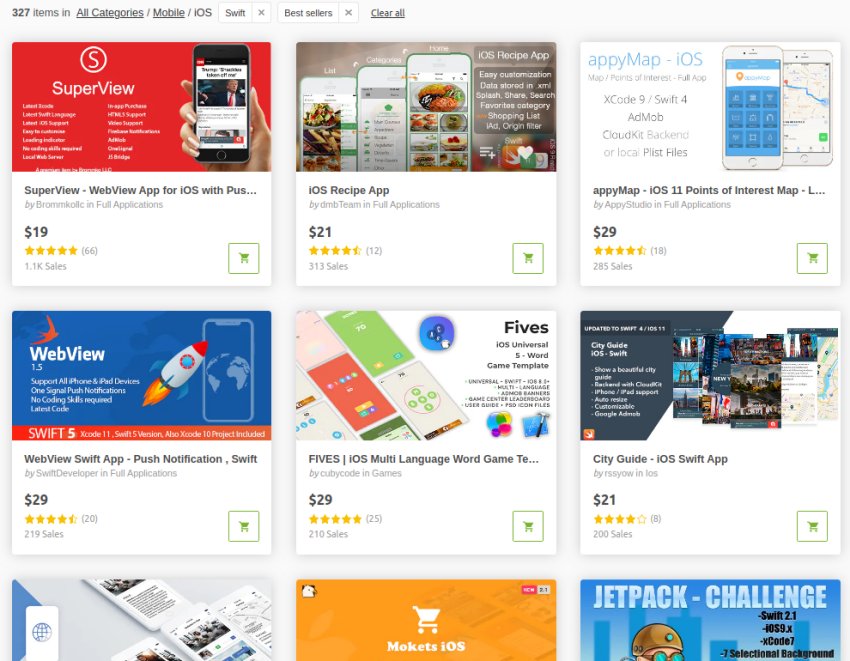 If you have trouble deciding which template on CodeCanyon is right for you, these articles should help:

Kyle Sloka-Frey
Data Scientist, Father, Game Dev, Developer, Futurist
Kyle is a data scientist, father, game dev, and all around analytics and organization lover. He enjoys space and all things Futurism.
kyleslokafrey
Weekly email summary
Subscribe below and we’ll send you a weekly email summary of all new Code tutorials. Never miss out on learning about the next big thing.
Advertisement
Translations