The Math and ActionScript of Curves: Gradients and Normals

Let's take a look one practical use of this math:

In this demo, the "ship" bounces off the edges of the SWF and the curve. The yellow dot represents the closest point to the ship that lies on the curve. You can adjust the shape of the curve by dragging the red dots, and adjust the movement of the ship using the arrow keys.

Step 1: Shortest Distance to a Curve

Let's consider the scenario where a point is located near a quadratic curve. How do you calculate the shortest distance between the point and the curve?

You can see that we have substituted \(y_c\) with the quadratic equation. At a glance, we can see the highest power is 4. Thus, we have a quartic equation. All we need to do is to find a minimum point in this equation to give us the shortest distance from a point to a quadratic curve.

But before that, we'll need to understand gradients on a curve...

Step 2: Gradient of a Curve

Before we look at the problem of minimizing a quartic equation, let's try to understand gradients of a curve. A straight line has only one gradient. But a quadratic curve's gradient depends on which point on the curve we refer to. Check out the Flash presentation below:

Drag the red dots around to change the quadratic curve. You can also play with the slider's handle to change the position of blue dot along x. As the blue dot changes, so will the gradient drawn.

This is where calculus will come in handy. You may have guessed that differentiating a quadratic equation would give you the gradient of the curve.

So \(\frac{df(x)}{dx}\) is the gradient of a quadratic curve, and it's dependant on the \(x\) coordinate. Well, good thing we've got a method to handle this: diff1(x:Number) will return the value after a single differentiation.

To draw the gradient, we'll need an equation to represent the line, \(y=mx+c\). The coordinate of the blue point \((x_p, y_p)\) will be substituted into the \(x\) and \(y\), and the gradient of the line found through differentiation will go into \(m\). Thus the y-intercept of line, \(c\) can be calculated through some algebra work.

Check out the AS3: 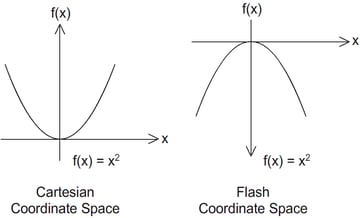 Step 5: Rate of Change for Gradient

Now let's say I'm interested in finding the lowest point on a curve - how do I proceed? Check out the image below (both figures are in the same coordinate space).

In order to get the minimum point, we'll just equate \(\frac{df(x)}{dx} = 0\), since by definition we're looking for the point where the gradient is zero. But as shown above, it turns out that the maximum point on a curve also satisfies this condition. So how do we discriminate between these two cases?

Let's try differentiation of the second degree. It'll give us the rate of change of the gradient.

I'll explain with reference to the image below (drawn in Cartesian coordinate space). We can see that, as we increment along the x-axis, the gradient changes from negative to positive. So the rate of change should be a positive value.

We can also see that when \(\frac{df^2(x)}{dx^2}\) is positive, there's a minimum point on the curve. Conversely if the rate is negative, a maximum point is present. 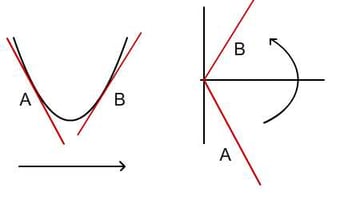 Step 6: Back to the Problem

Now we are ready to solve the problem presented in Step 1. Recall the quartic equation (where the highest degree is 4) we arrived at:

Remember, we are interested to find the minimum point on this curve, because the corresponding point on the original quadratic curve will be the point that's at the minimum distance from the red dot.

Solve for the roots of this (rather messy) cubic function and we'll arrive at the coordinates of the three blue points as indicated above.

So here's a sample implementation of the idea explained above. You can drag the red dots around to customise your quadratic curve. The blue dot can also be dragged. As you move the blue dot, the yellow one will be repositioned so that the distance between the blue and yellow dots will be minimum among all points on the curve.

As you interact with the Flash presentation, there may be times where three yellow dots appear all at once. Two of these, faded out, refer to the roots obtained from the calculation but rejected because they are not the closest points on the curve to the blue dot.

So here's the ActionScript implementation of the above. You can find the full script in Demo2.as.

First of all, we'll have to draw the quadratic curve. Note that the matrix m2 will be referred to for further calculation.

And here's the one that implements the mathematical concept explained. c1 refers to a point randomly positioned on stage.

Let's make use of this concept to detect the overlap between a circle and a curve.

The idea is simple: if the distance between the the blue dot and the yellow dot is less than blue dot's radius, we have a collision. Check out the demo below. The interactive items are the red dots (to control the curve) and the blue dot. If the blue dot is colliding with the curve, it will fade out a little.

Well, the code is quite simple. Check out the full source in CollisionDetection.as.

Step 11: Bouncing Off the Curve

So now that we know when collision will occur, let's try to program some collision response. How about bouncing off the surface? Check out the Flash presentation below.

You can see the ship (triangle shape), is surrounded by a circle (translucent blue). Once the circle collides with the curve, the ship will bounce off the surface.

Here's the ActionScript to control the ship.

You can see that the keyboard controls are updating flags to indicate whether the left, up, right, or down keys are being pressed. These flags will be captured by the enterframe event handler and update the magnitude and direction of the ship.

I've already covered the vector calculation of reflection vector in this post. Here, I shall just cover how to obtain the normal vector from gradient.

So the ActionScript below will implement the mathematical concept explained in the previous step. Check out the highlighted lines:

Well, thanks for your time! If you've found this useful, or have any questions, do leave some comments.