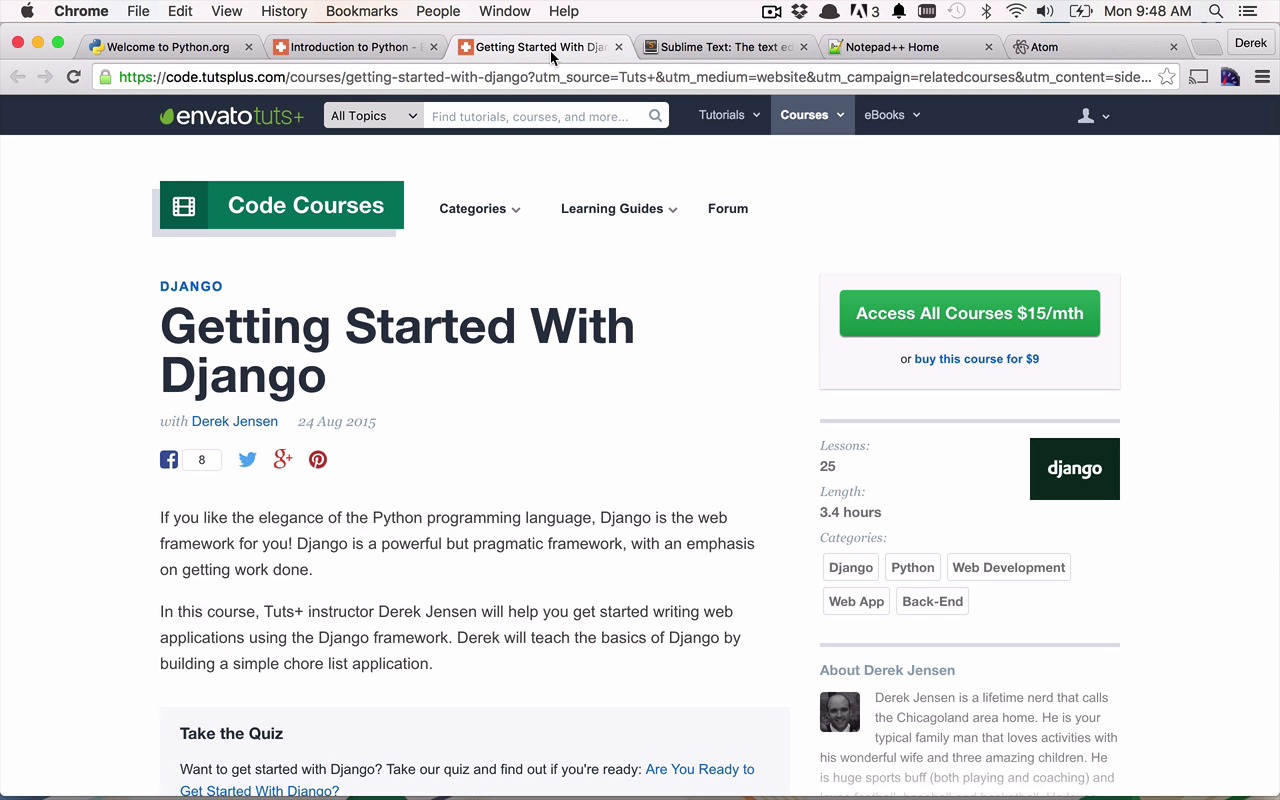 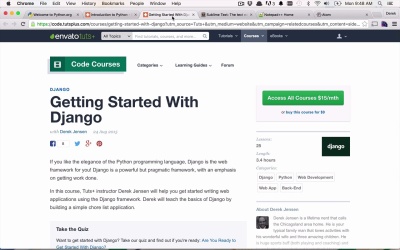 The only actual prerequisite for this course is Python. Once you have Python installed, you will be able to quickly and simply install everything else you need, including Django and feedparser (which we will use later on). I’ll show you how to get these tools set up and also how to create a “sandbox” to better manage your development environment. I’ll assume that you have basic knowledge of the Python programming language as well as a beginner-level understanding of the Django framework. For further background, feel free to check out some of my other courses linked below.

So, let's go through the basic process of making sure that we have all of the prerequisites available to us. Now, as far as prerequisites for this course it may seem a little strange that I'm gonna cover some things and not others, but basically what we're going to be dealing with here Is Django. And we're going to get into that in the next lesson. So we're not really going to talk about that as being a prerequisite. And you'll see why momentarily. But really, the basic process of what you're going to need here is, you're absolutely going to need Python. Now, if you are running on a Mac, odds are you already have that installed. And you can typically figure that out simply by typing python--version. Now. In this particular course you could use either Python2 or Python3 it doesn't really matter, and I actually have both installed as you can see here. Now, it's really kind of up to you as to which one you want to use, there is our compatible versions of Jengal for both Python2 and Python 3. So like I said either one will absolutely work. Now if you are running on Windows this basic process should work as well. If you have the Python executable paths in your path directory. And if you're not really sure, you can definitely head over to python.org and figure out how to check for those types of things, as well as getting a good list of downloads, and which versions are going to work on your supported platform. Now from that point on I'm gonna make a couple of assumptions. The number one assumption that I'm going to make is that you might have at least a basic understanding of Python as a language. If you're not a master of Python, it's quite all right. You don't have to be to follow along. It's fairly straight forward, and we're only going to be writing some very basic code to kind of glue together all the things that are going on. Now, if you are not familiar with Python then I would urge you to head over to Tuts+ and take a look at one of my previous courses as a introduction to Python. There's gonna be a lot of information in here, a lot of it you're not necessarily going to need for this course. But it really is gonna be beneficial to you if you at least have a foundational knowledge of Python programming language itself. Then after that I'm also going to assume that maybe you've at least heard of Django or at least understand what it is as a web application framework for Python developers to create these web applications. Now, once again, you don't have to be an expert in this but it would help to at least have a little bit of background. So you can head over to see my introduction to or getting started with Django course that I've put together previously as well. But that one's not as important as maybe the Python one, so I'm gonna go through a lot of the basics of Django as we're creating our application, but I'm not gonna dig into a lot of the specifics and under the covers type things in this courses, I'm really looking to more or less build an application, not really get into what exactly Django is. And then after that, you really just need a text editor. You can use Text Edit or Notepad or whatever's built in to your native platform that you're running this on. Whether it be on Windows or Linux or a Mac, but you can use other more sophisticated text editors or even IDEs if you would like. So, you could use things like Sublime Text, you could use Notepad++, you could even use PyCharm which is a very good product by JetBrains. So, you could head over to PyCharm and check out that as well, that would work just as well. But in this particular course I've started to use Atom text editor a little bit as of late and I've really started to like it. So, I'm gonna use that for this particular course but feel free to use whatever text editor you want that you are comfortable in really, because at the end of the day this is python, it is more of a scripting language. So you really don't need any sophisticated IDEs to be able to do it. You're not compiling anything or anything like that but it would definitely help for you to have maybe a text editor that at least understands the Python programming language and maybe give you a little bit of syntax highlighting just so you can kind of See things a little bit easier and that's basically it. So, as far as the prerequisites, that's gonna be it. Now, in the next lesson, I'm gonna take you into the process of discussing how we're gonna get Django installed so that we can go ahead and begin creating our application for this course.