Which CSS Grid Framework Should You Use for Web Design?

Ever wondered how all those slick "magazine" themes for WordPress and other platforms were created? Many, if not all, were designed using a CSS Grid Framework - at least in essence if not in actual fact. That is, you can use an existing CSS framework or build your own from scratch. While it's possible to design complex web page layouts without a framework, it's arguably an act in masochism. In this article you'll get an overview of the current batch of Frameworks and which you should choose to use.

What is a CSS Grid Framework?

Layout grids have been used in print publishing long before the Web. They're an invisible foundation used to achieve visual cohesion in magazine and newspaper page design and layout. They essentially amount to a lattice that divides horizontal and vertical space in consistent units where text, headlines, images, and advertising can be placed.

The same concept has been adapted for web page design for much the same reason, using CSS (Cascading StyleSheets) code to position HTML elements. In fact, many editorial sites run by large print media publishers do apply grids to achieve a look on their websites that's similar to their print content.
Note that the vertical axis is not as well supported in CSS Grid systems, since a web page's height is not as much of an issue as for a printed page. (Still, that's a minor issue in web page design, unless you expect the same features as with Desktop Publishing - aka DTP - systems, which is difficult to support without a PostScript-like language for browsers to implement and support.) 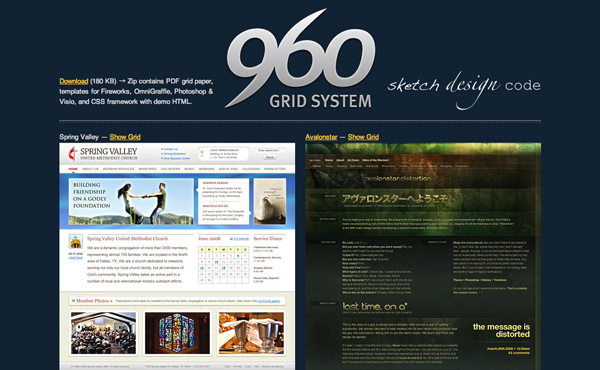 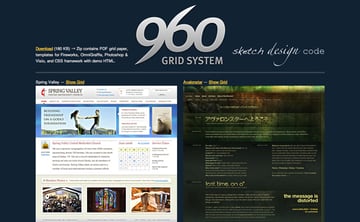 960 CSS Grid System - one of the nicer designs for a framework website :-)

Why Use a CSS Grid Framework?

Not all designers support the use of using grid frameworks over tables, or even at all. But let's face it; there are layouts you simply can't do with just HTML tables without a great deal of painful effort - and lots of nesting that's hard to decipher, should ever have to make changes.

Sure, if you use grids, you'll have to add some necessary HTML tag markup to your content, thus increasing page file sizes. Also, this means that markup and style are not truly separated - a tenet which many web designers would like to adhere to. (Some people feel, rightly or wrongly, that naysayers of CSS frameworks are designers who are worried that the need for their services will decline. Though, with this logic, coders are in trouble, too, especially with the increase in cross-browser code libraries such as jQuery.)

The fact is, using a CSS grid framework means that your browser loads the CSS file(s) only once and keeps them cached "on the client side". Plus, the additional HTML markup needed to apply the "invisible" CSS framework is rarely so significant that bandwidth issues for readers should be a concern. (Interestingly, most of the naysayers seem to be talking about Yahoo UI Grids, not so much Blueprint.)

In most of the examples I've been working with, and in any of the magazine themes using grids that I've inspected, we're talking relatively small file size increases - especially compared to the blog platform code being used. A single large image will likely take up more space. With faster Internet connections, it really isn't such a big deal.

Regardless, of whether you use CSS grids for prototyping or production systems, there are multiple aesthetic and design benefits: 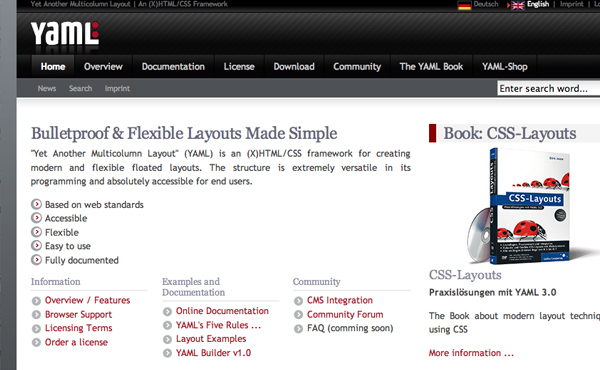 YAML - "Yet Another Multicolumn Layout"

Here's a short list of some of the more popular frameworks:

There are other CSS Grid frameworks you can find listed in Google Code, but of the three or four more that I looked at, most were incomplete in terms of documentation or even project files, so I've left them off. If you know of a framework not listed, please do let us know in the comments!

Let me point out that this is not a comprehensive comparison of CSS frameworks. In fact, I've not used anything extensively other than Blueprint, though I've scanned docs for all of the frameworks listed above and played a bit with YAML and Grid Designer. Blueprint, YUI Grids, and YAML are arguably the "big three" in the CSS framework space, and 960 seems to be a solid fourth choice.

In choosing a framework, I've taken into account that I'm not a trained designer - beyond what I've studied on my own for years. I do dabble in design when necessary, albeit in a very minimalist form. In fact, because I spent quite a few years either publishing my own print magazine or working on others, I did a fair bit of (really bad) page layout using the principles of grid design working with Adobe PageMaker. So I find it very natural to work with CSS Grids for web design. It seems that given the number of WordPress themes out there - see the list at end of this article - that are based on a grid framework (mostly Blueprint), designers feel pretty comfortable with grids, too.

Nevertheless, with time always limited, I need something easy to learn and use, yet robust. I've found that Blueprint CSS Grid suits my needs. It integrates nicely with various JavaScript libraries - including jQuery, which can result in some damn sexy web interfaces. It renders well (though not 100% perfectly) in most browsers - though you need to test for that big thorn in web designers' sides, IE browser.

Based on my loose research of CSS Grids this last year, Blueprint seems to be the most robust framework, the least restrictive, the most supported - in terms of how widespread its use is - the smallest in size, and the framework with the most tools. In fact, the beauty of Blueprint is that you can very quickly produce the CSS code for a custom framework using tools like Kematzy's Blueprint Grid CSS Generator. Though you can do this with Grid Designer, a quick comparison would suggest it's not as robust as Blueprint.

On the flipside, scanning and browsing the documentation for Yahoo! UI Grids CSS framework leads me to believe that if you just want to do some simple web page layout and want a handful of presets to play with, you might want to look into this option. However, I feel it's a bit too restrictive for my liking. (You might want to read Foo Hack's Blueprint CSS Framework vs YUI Grids.)

Ultimately, when it comes to learning something new online - such as a programming language and code library/ framework - I always apply the "shoulders of giants rule". I first shortlist the options that seem suited to what I need, then select based on how much it has been written about. Might not seem fair to newer options, but the process isn't that much more arbitrary than how many people pick web applications to use. There's too much out there to keep track, and having an existing supportive community makes a big difference. 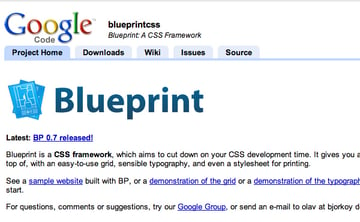 Why I Picked Blueprint CSS

Blueprint CSS Grid Framework is what I'll be using in all of my tutorials at NETTUTS (when it's relevant). Instead of copying the feature list from the docs at Google Code, let me focus on why I personally picked it. Some of these points overlap with what I've said above:

As mentioned above, I do run into IE problems - but then doesn't everyone? Several WP themes using Blueprint have resolved IE browser issues, so I'm extrapolating in my belief that they can mostly be resolved.
Blueprint, as of this writing, does not support liquid layouts - something I'm not a huge fan of anyway. However, such support is apparently coming, in case you lean that way.

Well this is a matter of choice, isn't it? Some CSS Grids come with a grid.png or even a .psd file that you can use in transparent mode in Photoshop, Fireworks, GIMP, etc., while you're laying down your design elements. I'm a bit more old school and always design my layouts by starting on paper:

You'll notice that nowhere in that process is the use of graphics software for layout mockup. That's because I am not a designer and use a very minimalist approach for what I design (for myself only). But if you do plan to use, say, Fireworks for your mockup, you would do so between steps #3 and #4.

I've tried to be comprehensive in my search for CSS Grid Frameworks, scanning over 120 articles for leads. However, it's possible I've missed some options, so feel free to offer others.
Whichever CSS framework you decide to use, do so because it best suits your general needs. If the pages/ templates you design will have advertising, consider what type of ads. Early on, when I picked themes for my sites, I chose for AdSense ads (which are IAB-compliant). More recently, I've been picking/ designing for blocks of 125x125 ads, which I highly prefer over most AdSense blocks.
If you're interested, there is a W3C draft specification entitled CSS Grid Positioning Module Level 3 (written by two Microsoft employees) that discusses integrating grid-based layout into CSS. The features discussed in this draft could be in IE 8.

Some Articles or Sites About CSS Grid Frameworks

Here are links to a few of the many great articles out there about CSS Grids. 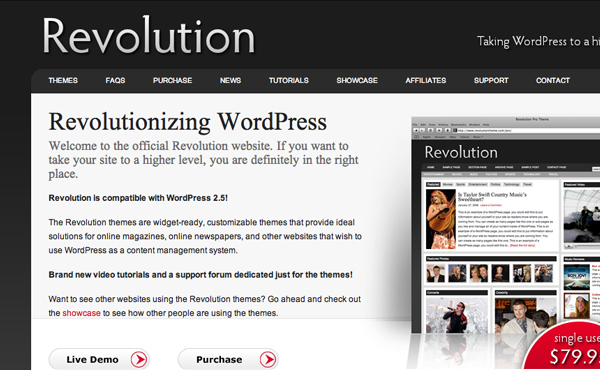 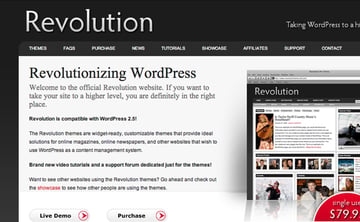 If you feel that you're not ready to tackle grids and theme design yet but need a grid-based theme, here's probably one of the most comprehensive lists you'll find. (There are actually more than 46, if you include variations.) It includes magazine, magazine-like, gallery, specialty and various premium themes that use either explicit or implicit CSS grids. (It's possible one or two do not use grids, though at first glance, they appear to.)
A few of these themes are free or have a free version. Most are for the WordPress platform. This list only includes themes available to the general public, not necessarily custom grid themes used by various bloggers. (See select links in the previous list, including Web Designer Wall and Smashing Magazine for snapshots of such sites. Also see Khoi Vinh's Subtraction, as an example of a visually impactful grid-based site.)
Warning: Some of these themes might not work in WP 2.5x+

The above list of magazine themes is compiled from the following references, as well as from searching Google.com.

HTML & CSSWeb DevelopmentCSSGrids960 Grid System
Did you find this post useful?
Yes No
Would you like to provide feedback (optional)?
Cancel Submit
Want a weekly email summary?
Subscribe below and we’ll send you a weekly email summary of all new Code tutorials. Never miss out on learning about the next big thing.
Sign up

Raj Dash
Raj Dash is a multi-blogger, math/computer geek, cook, composer, philosopher, former search engine webmaster, former publisher/editor, and published writer and author. You can find his hubsite at Chameleon Integration, which will lead you directly or indirectly to some of his active blogs and zomblogs.
Scroll to top
Looking for something to help kick start your next project?
Envato Market has a range of items for sale to help get you started.