watchOS 2: The Power of Animations

The new operating system for Apple Watch, watchOS 2, was introduced a couple of weeks ago at WWDC 2015. It brings a lot of improvements, mostly for developers looking to create an Apple Watch app. These are the things that I find to be most important for developers:

1. Why Care About Animations?

Before we get to the nuts and bolts, I’d like to spend a minute talking about the purpose of animations on Apple Watch apps.

The obvious reason is that they make the user interface more enjoyable if used appropriately. And when it comes to Apple Watch, that is a big if. Since most app interactions only last for a few seconds, you really don’t want to go overboard with animations.

The second, and I believe more important reason, is that they allow for custom navigation hierarchies inside Apple Watch apps. Let's suppose you need to present a screen that the user can only leave by taking a specific action. Normally, Apple Watch apps always have a cancel button in the top left corner when a modal interface controller is presented. With animations and clever layout manipulation, you could create your own "present view controller" routine that shows your app's content full-screen, dismissing it by that specific action. That is one of the things you’ll learn in this tutorial.

Before you delve into this tutorial, you should have a basic knowledge of how the layout system works on WatchKit. Even if you are an experienced iOS developer, the group-based layout in WatchKit is very different than what you are used to on iOS. You need to think about the layout in a very different way. But once you get used to it, you will be able to create most layouts without much effort.

If you are new to layout on WatchKit, there is a great tutorial on Tuts+ by my friend Patrick Balestra, Understanding the WatchKit Layout system. Using an example app, he explains everything you need to know to get up to speed.

Also, there are many WWDC sessions that touch onto this subject. The session that I recommend the most and that covers WatchKit animations is this titled Layout and Animation Techniques for WatchKit.

The principle of animations on watchOS 2 is simple, you set one or more of the animatable properties inside an animation block. The following example illustrates how this works.

This method causes the circleGroup to be aligned to the right, with an animation with a duration of 0.5 seconds. As you can see, we are calling animateWithDuration:animations: on self, which is an instance of WKInterfaceController. This is different from iOS where the animation methods are class methods on UIView.

Bear in mind that it’s still not possible on watchOS 2 to create user interface elements at runtime. But since you can hide them or set their alpha to 0 in the storyboard, this shouldn’t be that big of a problem.

That’s it. Armed with your knowledge about the WatchKit layout system, you are now ready to start working with native animations on watchOS. Let’s get started by creating a sample app so I can show you a couple of examples of how this all fits together.

We are going to create a simple watchOS 2 app that will introduce a couple of these animation concepts. It is by no means trying to provide a complete overview of all the things that are possible. Instead, it shows the basic idea, which will hopefully enable you to come up with solutions to what you need.

At the time of writing, Xcode 7 is still in beta. To create a watchOS 2 app, you need to use Xcode 7 so that’s what I am going to use.

Add a group to the interface by dragging it from the Object Library on the right. In the Attributes Inspector on the right, change its layout to Vertical and set its height to Relative to Container. 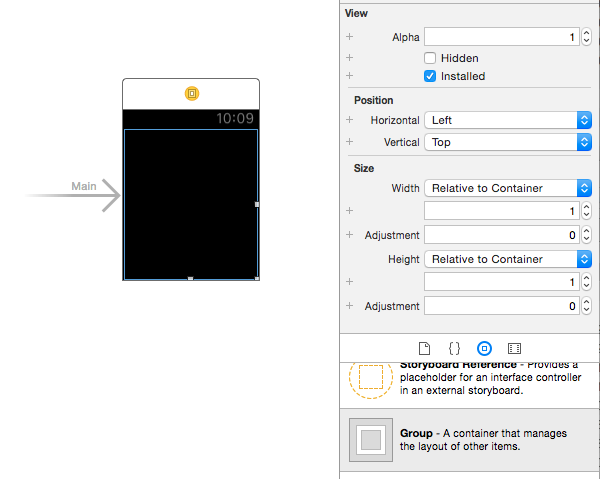 Add a second group to the group we just added. In the Attributes Inspector, set its vertical position to Bottom.

Add four buttons to the second group. For each button, set Size to Relative to Container with a value of 0.25. Set the titles of the buttons to ←, →, ↑, and ↓. After this step, the user interface should look like this: 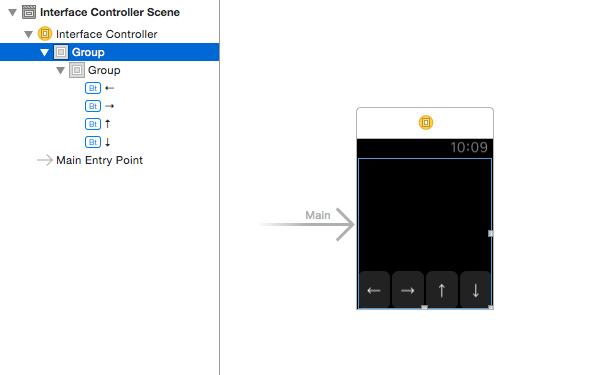 To finish the first part of the user interface, add one more group to the main group and configure it as follows:

The following screenshot shows you how the circle should be configured.

These actions will move the red circle in a specific direction. And as you can see, we accomplish that by settings its vertical and/or horizontal alignment inside an animation block.

Open Interface.storyboard and connect the outlets as shown below. 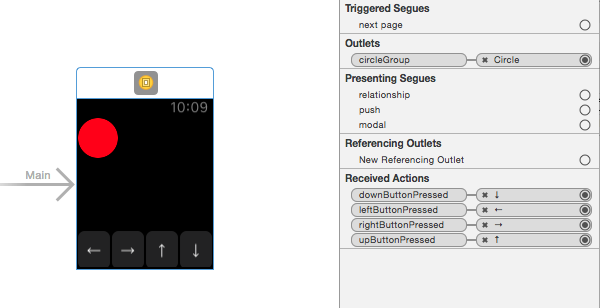 That should do it. Run the project and, if you've followed the above steps, you should be able to move the red circle around the screen using the arrow buttons.


In the second part of this tutorial, we’ll create a push animation. Since most of the steps involved are similar, I will move a bit faster this time.

Next, implement the following actions in the InterfaceController class.

Open Interface.storyboard and add a new group to the user interface. Put the group that was already there, the one containing Circle and the group with buttons, inside that new group. Set its Layout to Horizontal and rename the contained group to First screen. This will come in handy later. The result should look like this: 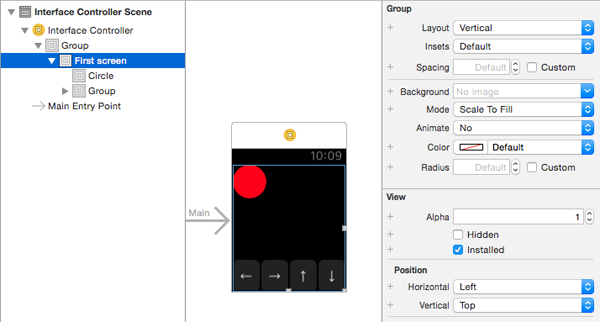 Next, add a second group that will be on the same level as the First screen group. Set its Layout to Vertical. Add an image and a button to the group. You can add literally any image, just make sure you put something there because otherwise the animation would look somewhat dry. Set the title of the button to "< Pop". Connect the button to the popButtonPressed action we created earlier. The user interface should now look like this:

Add a button to the First screen group. Set its title to "Push >" and its vertical position to Bottom. Connect the button to the pushButtonPressed action. The user interface should now look like this: 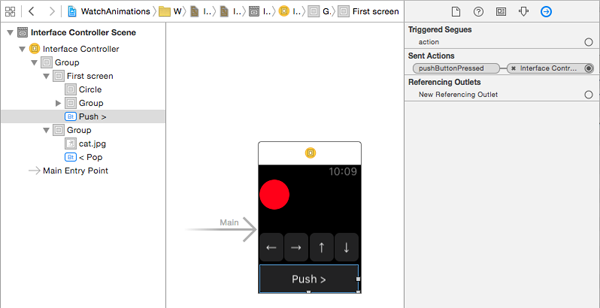 There's one thing we need to do, connecting  the firstScreenGroup outlet to the group we named First screen.

Lukas Petr
Indie iOS Developer, Prague
Indie iOS developer by profession and by heart. I enjoy creating simple to use apps that are reliable and delightful. Apart from development, I do cycling and blogging.
luksape
Weekly email summary
Subscribe below and we’ll send you a weekly email summary of all new Code tutorials. Never miss out on learning about the next big thing.
Advertisement
View on GitHub
Translations