Taking a Closer Look at the ActionScript 3.0 Event Framework

In this tutorial I'll explain about the ActionScript 3.0 Event Framework. After this tutorial you should have a clear understanding of how events, event dispatchers and event listeners work.

What Are You Going to Learn?

I'm an avid reader of Computer Arts and I wait every single day for the new issue. When I receive the issue, I start reading it.

Okay, we have several things going on:

An Event is an object which describes an occurrence, in Step 1 the event is the arrival of a new issue.

Most times you'll see an event that's written in a structure similar to this:

This snippet of code consists of two things:

The event type is actually a static constant string. It might sound strange, but an Event is nothing other than a string. Try running this snippet.

You'll get as output mouseMove. We've just traced the constant MOUSE_MOVE, which is inside the MouseEvent class. An event is a string! But this string represents the occurrence of (in this example) the movement of the mouse.

An event always happens somewhere. Where the event happens is where it gets fired (dispatched). The roots of dispatching events is in the class EventDispatcher. Do realize that where the event is dispatched is where it is happening. So if movie clip A dispatches an event, then an event listener (event listeners will be explained in step 5) added to movie clip B wouldn't receive this event.

To make things easy, all the display objects have the built in function dispatchEvent(event:Event), just like many other classes.

Look at the image below, showing the syntax behind the function addEventListener(), which is used to add an event listener: 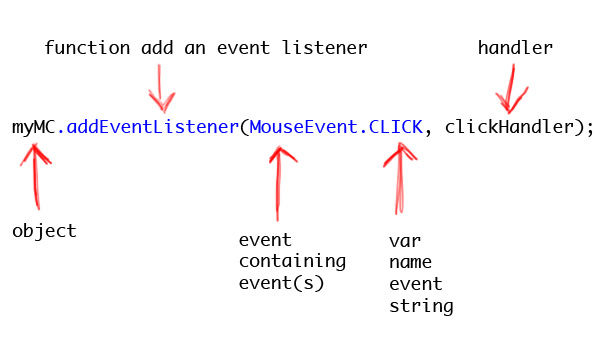 So let's discuss the last 3 parameters:

Removing an event listener is just as easy as adding one.

When the event occurs that an event listener is listening for, it calls a function. This function is called the handler or the listener function. Look at the image below, showing the syntax of the handler: 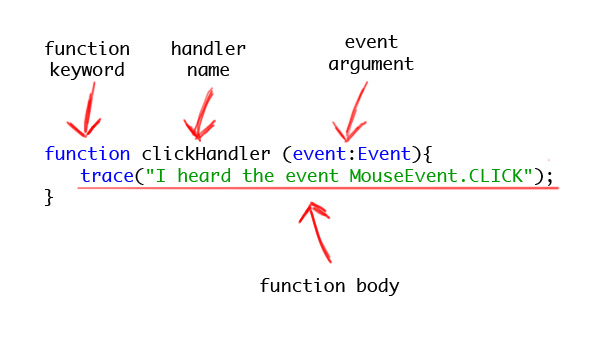 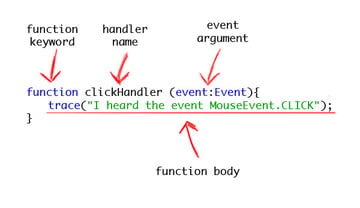 Notice the argument in the handler, this argument is compulsory. The listener function only has one argument and is not allowed to have more. This event contains information about the event, we'll talk about this in step 9.

Now we want myMC to respond to the dispatched event, so we'll add an event and afterwards the handler function. Our code will look like so:

Did you get any output? No? Well, neither did I. We'll look at what's going wrong in the next step.

So what's going wrong? Well, it can't be a syntax error, at least I'm not getting anything. No, this is technically not even an error. Look at the code again, but this time remember that the code will be executed line by line:

So why did we do all that? Well, you'll likely encounter this problem and it might take a while to realize what's going on. It's better to show you the problem and teach you how to solve it.

Every handler function has one argument; the event argument. This argument contains data about the event and the event dispatcher. The parameter contains properties that we would like to read. Here's a list of some of the most commonly used ones:

With this we can use the same handler for different types of events. How? Well we'll discuss this in the next step.

Okay, first let's look at this snippet of code:

Now we can use instead of two handlers (namely downHandler and upHandler) just one handler. Remove the code we've written and type following:

Okay, we've set up our handler and it works, but we want our handler to do something specific, depending on which event is passed to the handler. Luckily, we can use event.type. Let's use it!

Now let's say that a click happens on a movieclip, let's call it mcA. The event doesn't simply get dispatched at mcA, no, the event travels through the whole player. This traveling is called the event flow, just think how the event is flowing through the player.

The event starts at the top level, at the stage, afterwards it will go through the parents of mcA, until the event reaches mcA. Afterwards the event will "bubble" back from mcA, back to the stage. 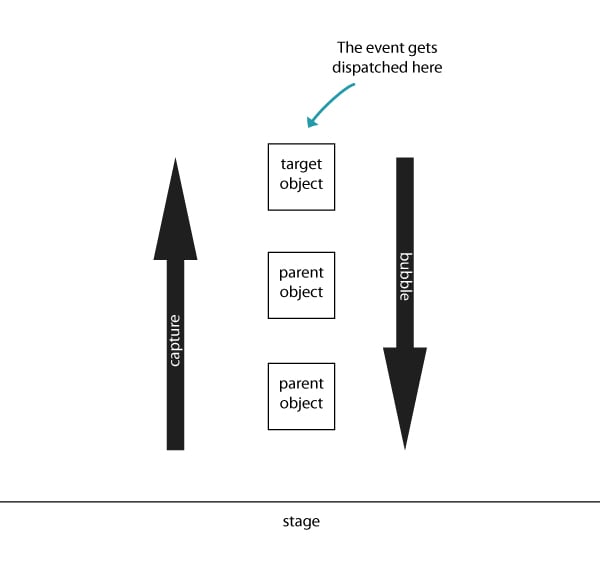 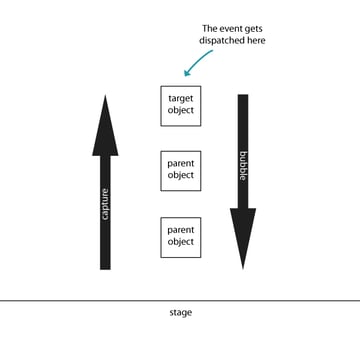 Ok, cool, but what can I use this for? Because we now know that an event travels through all the parents of the dispatcher, we can use just one event listener, to track the events of more than one object.

Okay, so let's create some multiple movie clips inside each other. You can do this yourself, or just use the step-11.fla file provided.

We'll create 3 movie clips and we'll give them the instance names redMC, blueMC and greenMC. Afterwards place all these inside a bigger movieclip, named container.

We want to know which button is being clicked, so why did we add an event listener to container? Well, look at the picture below: 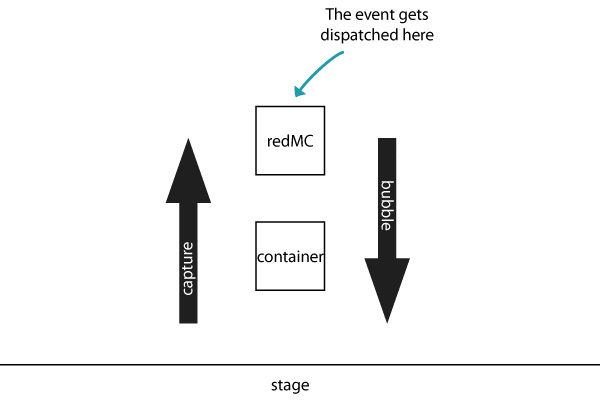 As you see, the event is being dispatched at redMC, however it will bubble back to container. Then the event listener added to container will hear the event and will call the listener function clickHandler. The same happens with blueMC and greenMC.

Now you have a good understanding of the event framework, however to achieve something, the key thing is to know which event to use. A great place to check which events exist, is the ActionScript 3.0 Language and Components Reference. Just click an event containing class, like MouseEvent, and look at what each event is.

This event occurs when the user moves the mouse. If you add an event listener listening to this event, on, let's say, a movieclip named myMC, then you'd know when the mouse is moving over myMC.

This event is precisely the opposite of MouseEvent.MOUSE_OVER. This is when the user's cursor moves off the object, or as they (the guys that created AS3) call it, out of the object.

This event occurs when the user presses the primary mouse down, while it's being held down.

Well this event occurs when the user clicks twice (with the primary mouse button). Do note that when MouseEvent.DOUBLE_CLICK occurs, that MouseEvent.CLICK is occurring for the second time.

If you now test your movie and double-click, nothing will happen. Why? Well by default movie clips (and almost all display objects) have the property doubleClickEnabled set to false. So MouseEvent.DOUBLE_CLICK won't be dispatched. Just set it to true, and everything will work fine.

This event occurs every time the object enters a new frame (yes, that sounds a bit weird). Well basically this event occurs at the rate of the frame rate. That means that if your movie has a framerate of 30 fps, then the event will be called 30 times a second. What would you use this event for? You can use this event to make things happen gradually. For example you could increase an object's x coordinate by 5, at the rate of the frame rate.

This event occurs when the object completes whatever it was doing. Most times you'll use it for things that need to load something, or for things that play some form of media. An URLLoader loads an URLRequest, after the URLLoader completes loading, then we'll load this data into a different loader and afterwards add the loader to the stage.

This event occurs when the flash player or the page where the flash is contained is resized. You can use this event to reposition objects after the resizing has happened.

This event occurs when any key is pressed on the key board.

This event is precisely the opposite of KeyboardEvent.KEY_DOWN, this event occurs when any key is released (the key goes up).

Of course, it's pretty useless to respond to any key (except for a screen saver), so we would need to retrieve information as to which key has been pressed. Luckily, some of the keys are built into the class KeyboardEvent, these are booleans and are set to true when it's being pressed down. These built in booleans are:

So now we can use this to be more specific which key must be pressed before we do something.

You might be wondering, okay, what about all the other keys? Well there's something called the key code. Every key has a certain number; a key code. We can check the key code of the key that triggered the event. This is done with event.keyCode, which returns an integer. Click here for a list of key codes. Even though it's for javascript, the key codes are the same.

Now it's easier to store the key codes in a variable (or if you're hardcore, in a class) and just use that variable, instead of the key code.

With key codes you can get quite a lot done, however it sometimes isn't what you need. For example, the same key is used for the characters a and A. But we'd still want to differentiate between those two. Well, the event carries the character code of the event dispatcher.

Try testing this, it won't work! Why? If myMC is a movie clip, it won't accept keyboard input, thus keyboard events won't be dispatched at movie clips. If you want myMC to respond, add the event listener to the stage and then make myMC do something. Try changing myMC from a movie clip to a dynamic text field, then it will work.

What about two dynamic text fields? If the user types, do both text fields dispatch an event? No, only the one you're typing in. This is called focus. Keyboard events are dispatched by the object which has focus. The stage is the only object that still has focus, while a different object also has focus.

This event is specially built for timers. It gets dispatched at a timer, that just reached the delay time. This means that you can use this event to do something very precisely, at set time intervals.

That was it! I hope that you now have a thorough understanding of ActionScript 3.0's event framework. Do realize that the events discussed aren't all the events that exist, I just discussed the ones I use often. Don't forget to always check the language and components reference, it can help you a lot! It was a pleasure writing for you guys!

Daniel Apt
Daniel Apt is a Dutch 21-year-old web designer living in London. He is passionate about all forms of design, especially when combined with technology. He’s currently studying Design for Graphic Communication at the London College of Communication.
Looking for something to help kick start your next project?
Envato Market has a range of items for sale to help get you started.