As a WordPress developer - specifically for plugins, in this case - determining the best way to provide support for your work can be a challenge. In fact, I'm currently in the process of evaluating what may be the best route for my current set of plugins, so this topic hits close to home.

As such, I thought it would be a relevant topic to share and discuss with the Wptuts+ community.

The Fragmentation of Support

Before we discuss the various options for support, it's important to note that as it stands right now there is a fragmentation of support that exists, even if you're simply maintaining a free plugin in the WordPress Plugin Repository. For example, here's how a lot of developers work:

Now, to be clear, I don't fault anyone for reaching out to the developer through any of the available channels.

We need a way to funnel all questions through a single channel so that the problems, solutions, questions, and answers are easily visible or accessible by others so that developers aren't left repeating themselves.

But that's a tricky problem to solve. Some have done it well, some are still looking for solutions, and we'd love to hear from both in the comments. In the meantime, let's review some of the more popular support models that exist.

We're going to look at four different models for offering support. I want to be clear that this is not the definitive list of support options, but a few of the most common support models that developers use today. One way that developers offer support is through some type of closed system. This doesn't necessarily mean that all questions must be answered with payment - only those that are more involved or that require a significant time for troubleshooting.

The advantage to using this model is that there is obviously financial compensation for the time spent in helping the user. Often times, users are happy to pay assuming that the price is reasonable, and that the problem is significant enough; however, this can spur some bit of push back as users who believe that a free plugin should come with free support may also reject this.

It's a fine line to balance, for sure, and I agree that plugins should all work under a certain set of conditions; however, I don't believe that every problem that crops up is insignificant enough to warrant free support.

There are so many different permutations of hosting environments, WordPress versions, conflicting plugins, and other factors that isolating the problem can be challenging enough. 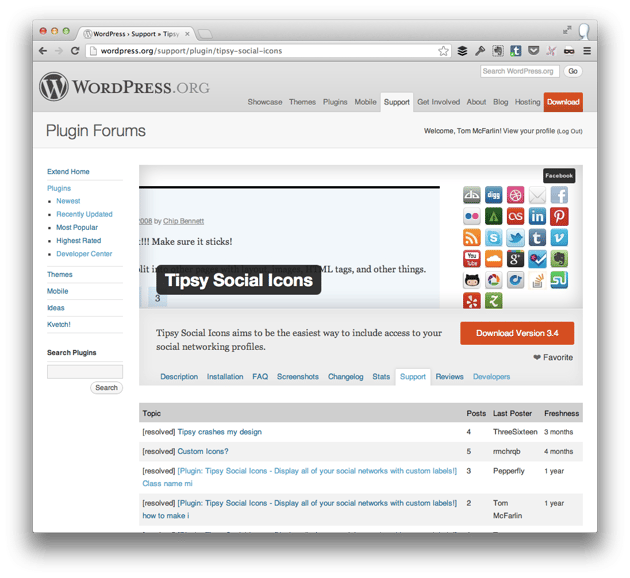 The WordPress Plugin Repository is often under-rated, in my opinion. It offers a variety of really nice tools for plugin developers that are simply under utilized either by the developers or by the users.

Aside from offering a consistent experience across the board for all developers and users, it gives us:

The problem is that you often have to consistently check back to the plugin pages to see if any new topics have been opened. On top of that, many of the people who leave topics are used to the plug-and-play model of themes and other plugins which can cause erradict results thanks to poor coding practices, conflicts, or some other anomaly.

Even still, the Support Forum isn't bad - it's free, it's available for each plugin that we release, and it provides a consistent experience for the users. It's worth considering, but it does require a bit of extra effort on the developer's behalf.

Email is a slippery slope when it comes to offering support, because it has a slightly more personal feel to it than one of the available forum options. As soon as you begin offering support through email, you've essentially given a user permission to contact you regarding a number of other issues either with their plugins or with WordPress problems they may have.

I'm not sharing this out of ignorance, either. This has happened more than a few times with me (and I do take full responsibility for it). Secondly, the problem with using email for support is that it has absolutely no visibility.

It provides no value to anyone except the person(s) in the email thread. This means the potential for duplicate support is really high.

Finally, one extreme option is simply to offer no support. I'm not particularly advocating this strategy, but I have seen it done, though I can't speak to its results.

But if you're offering a free plugin and you're actively maintaining it, one option is to simply put it out in the wild and let the users fend for themselves.

It's a dangerous route to go as I think that, as developers, we have some responsibility to our users since we're attempting to create something to solve a problem for them, but that's just one subjective stance on the topic. I'd love to hear others' thoughts on it.

Before concluding, I think it's worth asking the above question: Do free plugins imply free support? Personally, I don't think so. At least, not as a whole.

On some level, I think that there's a level of support we are obliged to give - especially those that normally take just a few minutes of time to resolve; however, there are other more convoluted issues that simply require more time.

At this point, I think it's perfectly acceptable to ask for some level of compensation. I consider this to be analogous to a warranty with a physical product - replacements parts or fixes are available for a certain time; however, more complex problems usually require some type of technician.

I've had recent conversations with respectable WordPress Plugin Developers all of whom have a stance on where to draw the line at free and paid support; however, each developer has his or her own opinion on what works for them.

Above all else, the conversation was rich with a variety of options, advantages, disadvantages, and more. To that end, I'd love for the Envato community to chime in and see if there isn't more to be discussed - and possibly even solved - through the comments on this post.