React is a popular JavaScript front-end library for building interactive user interfaces. React has a comparatively shallow learning curve, which is one of the reasons why it's getting all the attention lately.

Although there many important concepts to be covered, components are undeniably the heart and soul of React. Having a good understanding of components should make your life easy as a React developer.

This tutorial is intended for beginners who have started learning React and need a better overview of components. We will start with component basics and then move on to more challenging concepts such as component patterns and when to use those patterns. Different component classifications have been covered such as class vs. functional components, stateful vs. stateless components, and container vs. presentational components.

Before getting started, I want to introduce you to the code snippet that we will be using in this tutorial. It is a simple counter built with React. I will be referring back to some parts of this example throughout the tutorial.

Here is a GitHub repo with the demo.

So let's get started.

Components are self-sustaining, independent micro-entities that describe a part of your UI. An application's UI can be split up into smaller components where each component has its own code, structure, and API.

Facebook, for instance, has thousands of pieces of functionality interfaced together when you view their web application. Here is an interesting fact: Facebook comprises 30,000 components, and the number is growing. The component architecture allows you to think of each piece in isolation. Each component can update everything in its scope without being concerned about how it affects other components.

Components are also reusable. If you need the same component in multiple places, that's easy. With the help of JSX syntax, you can declare your components wherever you want them to appear, and that's it.

Components need data to work with. There are two different ways that you can combine components and data: either as props or state. props and state determine what a component renders and how it behaves. Let's start with props.

If components were plain JavaScript functions, then props would be the function input. Going by that analogy, a component accepts an input (what we call props), processes it, and then renders some JSX code.

Although the data in props is accessible to a component, React philosophy is that props should be immutable and top-down. What this means is that a parent component can pass on whatever data it wants to its children as props, but the child component cannot modify its props. So, if you try to edit the props as I did below, you will get the "Cannot assign to read-only" TypeError.

State, on the other hand, is an object that is owned by the component where it is declared. Its scope is limited to the current component. A component can initialize its state and update it whenever necessary. The state of the parent component usually ends up being props of the child component. When the state is passed out of the current scope, we refer to it as a prop. 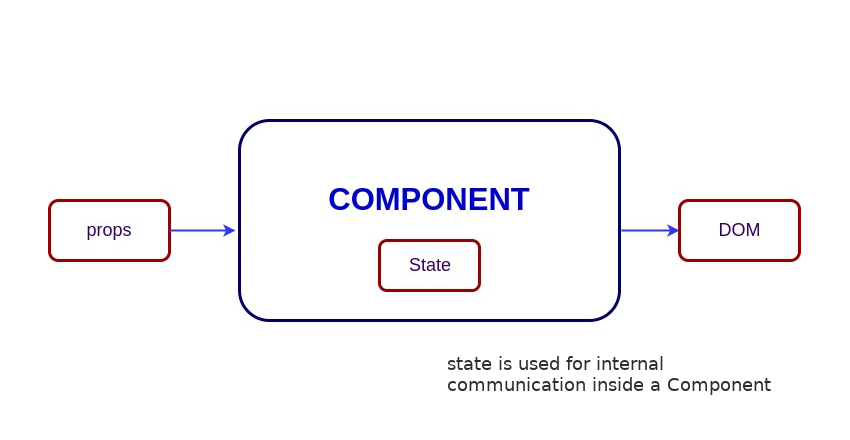 Now that we know the component basics, let's have a look at the basic classification of components.

A React component can be of two types: either a class component or a functional component. The difference between the two is evident from their names.

Functional components are just JavaScript functions. They take in an optional input which, as I've mentioned earlier, is what we call props.

Some developers prefer to use the new ES6 arrow functions for defining components. Arrow functions are more compact and offer a concise syntax for writing function expressions. By using an arrow function, we can skip the use of two keywords, function and return, and a pair of curly brackets. With the new syntax, you can define a component in a single line like this.

There are two ways that you can create a class component. The traditional way is to use React.createClass(). ES6 introduced a syntax sugar that allows you to write classes that extend React.Component. However, both the methods are meant to do the same thing.

Class components can exist without state too. Here is an example of a class component that accepts an input props and renders JSX.

We define a constructor method that accepts props as input. Inside the constructor, we call super() to pass down whatever is being inherited from the parent class. Here are a few details that you might have missed.

Class components should always call the base constructor with props.

As a best practice, I will recommend using the constructor for all class components.

Secondly, if you're using a constructor, you need to call super(). This is not optional, and you will get the syntax error "Missing super() call in constructor" otherwise.

And my last point is about the use of super() vs. super(props). super(props) should be used if you're going to call this.props inside the constructor. Otherwise, using super() alone is sufficient.

We've created a state object and initialized it with a count of 0. There is an alternative syntax proposed to make this easier called class fields. It's not a part of the ECMAScript specification yet, but If you're using a Babel transpiler, this syntax should work out of the box.

You can avoid using the constructor altogether with this new syntax.

We can now access the state within the class methods including render(). If you're going to use them inside render() to display the value of the current count, you need to place it inside curly brackets as follows:

The this keyword here refers to the instance of the current component.

Initializing the state is not enough—we need to be able to update the state in order to create an interactive application. If you thought this would work, no, it won't.

React components are equipped with a method called setState for updating the state. setState accepts an object that contains the new state of the count.

The setState() accepts an object as an input, and we increment the previous value of count by 1, which works as expected. However, there is a catch. When there are multiple setState calls that read a previous value of the state and write a new value into it, we might end up with a race condition. What that means is that the final results won't match up with the expected values.

Here is an example that should make it clear for you. Try this in the codesandbox snippet above.

We want the setState to increment the count by 100, then update it by 1, and then remove that 100 that was added earlier. If setState performs the state transition in the actual order, we will get the expected behavior. However, setState is asynchronous, and multiple setState calls might be batched together for better UI experience and performance. So the above code yields a behavior which is different from what we expect.

Therefore, instead of directly passing an object, you can pass in an updater function that has the signature:

prevState is a reference to the previous state and is guaranteed to be up to date. props refers to the component's props, and we don't need props to update the state here, so we can ignore that. Hence, we can use it for updating state and avoid the race condition.

The setState() rerenders the component, and you have a working stateful component.

The downside is that you can't have lifecycle hooks. The lifecycle method ShouldComponentUpdate() is often used to optimize performance and to manually control what gets rerendered. You can't use that with functional components yet. Refs are also not supported.

This is another pattern that is very useful while writing components. The benefit of this approach is that the behavior logic is separated from the presentational logic.

Presentational components are coupled with the view or how things look. These components accept props from their container counterpart and render them. Everything that has to do with describing the UI should go here.

Container components will deal with the behavioral part. A container component tells the presentational component what should be rendered using props. It shouldn't contain limited DOM markups and styles. If you're using Redux, a container component contains the code that dispatches an action to a store. Alternatively, this is the place where you should place your API calls and store the result into the component's state.

The usual structure is that there is a container component at the top that passes down the data to its child presentational components as props. This works for smaller projects; however, when the project gets bigger and you have a lot of intermediate components that just accept props and pass them on to child components, this will get nasty and hard to maintain. When this happens, it's better to create a container component unique to the leaf component, and this will ease the burden on the intermediate components.

So What Is a PureComponent?

You will get to hear the term pure component very often in React circles, and then there is React.PureComponent. When you're new to React, all this might sound a bit confusing. A component is said to be pure if it is guaranteed to return the same result given the same props and state. A functional component is a good example of a pure component because, given an input, you know what will be rendered.

Class components can be pure too as long as their props and state are immutable. If you have a component with a 'deep' immutable set of props and state, React API has something called PureComponent. React.PureComponent is similar to React.Component, but it implements the ShouldComponentUpdate() method a bit differently. ShouldComponentUpdate() is invoked before something is rerendered. The default behaviour is that it returns true so that any change to the state or the props rerenders the component.

However, with PureComponent, it performs a shallow comparison of objects. Shallow comparison means that you compare the immediate contents of the objects instead of recursively comparing all the key/value pairs of the object. So only the object references are compared, and if the state/props are mutated, this might not work as intended.

React.PureComponent is used for optimizing performance, and there is no reason why you should consider using it unless you encounter some sort of performance issue.

Stateless functional components are more elegant and usually are a good choice for building the presentational components. Because they are just functions, you won't have a hard time writing and understanding them, and moreover, they are dead easy to test.

Hopefully, this tutorial has given you a high-level overview of the component-based architecture and different component patterns in React. What are your thoughts on this? Share them through the comments.

Over the last couple of years, React has grown in popularity. In fact, we have a number of items in Envato Market that are available for purchase, review, implementation, and so on. If you’re looking for additional resources around React, don’t hesitate to check them out.

Unlimited Downloads
From $14/month
Get access to over one million creative assets on Envato Elements.