Every other week, we'll take an ultra focused look at an interesting and useful effect, plugin, hack, library or even a nifty technology. We'll then attempt to either deconstruct the code or create a fun little project with it.

Today, we're going to take a look at the excellent replaceText jQuery plugin. Interested? Let's get started after the jump.

A Word from the Author

As web developers, we have access to a staggering amount of pre-built code, be it a tiny snippet or a full fledged framework. Unless you're doing something incredibly specific, chances are, there's already something prebuilt for you to leverage. Unfortunately, a lot of these stellar offerings languish in anonymity, specially to the non-hardcore crowd.

This series seeks to rectify this issue by introducing some truly well written, useful code -- be it a plugin, effect or a technology to the reader. Further, if it's small enough, we'll attempt to deconstruct the code and understand how it does it voodoo. If it's much larger, we'll attempt to create a mini project with it to learn the ropes and hopefully, understand how make use of it in the real world.

Replacing content in your page sounds extremely simple. After all, the native JavaScript method replace seems to do the same thing. If you're feeling particularly lazy, jQuery makes replacing the entire content of the container obscenely easy too.

As the saying goes, just because you can do it doesn't really mean you should do. Both these methods are generally shunned [outside of edge cases] because they break a bunch of things whilst doing what they do.

The main issue with these approaches is that they flatten the DOM structure effectively screwing up every non-text node the container holds. If you manage to replace the html itself, using innerHTML or jQuery's html, you'll still unhook every event handler attached to any of its children, which is a complete deal breaker. This is the primary problem this plugin looks to solve.

The best way to deal with the situation, and the way the plugin handles it, is to work with and modify text nodes exclusively.

Text nodes appear in the DOM just like regular nodes except that they can't contain childnodes. The text they hold can be obtained using either the nodeValue or data property.

By working with text nodes, we can make a lot of the complexities involved with the process. We'll essentially need to loop through the nodes, test whether it's a text node and if yes, proceed to manipulate it intelligently to avoid issues.

We'll be reviewing the source code of the plugin itself so you can understand how the plugin implements this concept in detail.

Like most well written jQuery plugins, this is extremely easy to use. It uses the following syntax:

For example, if you need to replace all occurrences of the word 'val' with 'value', for instance, you'll need to instantiate the plugin like so:

Yep, it's really that simple. The plugin takes care of everything for you.

If you're the kind that goes amok with regular expressions, you can do that too!

You need not worry about replacing content in an element's attributes, the plugin is quite clever.

Since the plugin is made of only 25 lines of code, when stripped of comments and such, we'll do a quick run through of the source explaining which snippet does what and for which purpose.

Here's the source, for your reference. We'll go over each part in detail below.

Right, let's do a moderately high level run through of the code.

Step 1 - The generic wrapper for a jQuery plugin. The author, rightly, has refrained from adding vapid options since the functionality provided is simple enough to warrant one. The parameters should be self explanatory -- text_only will be handled a bit later.

Step 2 - this.each makes sure the plugin behaves when the plugin is passed in a collection of elements.

Step 3 - Requisite declaration of the variables we're going to use.

Step 4 - We check whether the node actually exists i.e. the container that was passed in has child elements. Remember that node holds the passed element's first child element.

Step 5 - The loop essentially, well, loops through the child nodes finishing when the loop is at the final node.

Step 6 - This is the interesting part. We access the nodeType property [read-only] of the node to deduce what kind of node it is. A value of 3 implies that is a text node, so we can proceed. If it makes life easier for you, you can rewrite it like so: if ( node.nodeType == Node.TEXT_NODE ) {}.

Step 7 - We store the current value of the text node, first up. Next, we quickly replace instances of the keyword with the replacement with the native replace JavaScript method. The results are being stored in the variable new_val.

Step 8 - Proceed only if the value has changed!

Step 9a - Remember the text_only parameter. This comes into play here. This is used to specify whether the container should be treated as one which contains element nodes inside. The code also does a quick internal check to see whether it contains HTML content. It does so by looking for an opening tag in the contents of new_val.

Step 9b - If it's just text, directly inject the new text into the node without going through the DOM juggling hoopla.

The small project we're going to build today is quite basic. Here is the list of our requirements:

Note: This is more of a proof of concept than something you can just deploy untouched. Obviously, in the interest of preventing the article from becoming unweildy, I’ve skipped a number of sections that are of utmost importance for production ready code -- validation for instance.

The actual focus here should be on the plugin itself and the development techniques it contains. Remember, this is more of a beta demo to showcase something cool that can be done with this plugin. Always sanitize and validate your inputs!

The Foundation: HTML and CSS

The HTML should be pretty explanatory. All I've done is create a text input, two links to apply and remove the highlight as well as a paragraph containing some assorted text.

Again, pretty self explanatory and quite basic. The only thing to note is the class called highlight that I'm defining. This will be applied to the text that we'll need to highlight.

At this stage, your page should look like so: 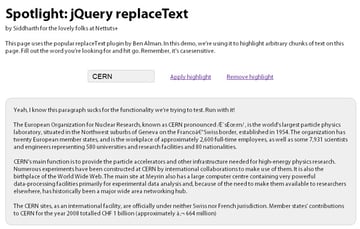 First order of the day is to quickly hook up our link with their handlers so the text is highlighted and unhighlighted appropriately.

Should be fairly simple. I declare a few variables for later use and attach the links to their handlers. highLight and removeHighlight are extremely simple functions we'll look at below.

A quick and dirty, hacky method to get the job done. And yes, this is a jQuery plugin since I wanted to redeem myself. The class is still hardcoded though.

I'm merely looking for every span tag with a class of highlight and replacing the entire node with the value it contains.

Before you get your pitchforks ready, remember that this is just for demonstration purposes. For your own application, you'll need a much more sophisticated unhighlight method.

And we're done. We took a look at an incredibly useful plugin, walked through the source code and finally finished by creating a mini project with it.