In today's modern workflow, the code that we author in our development environments is considerably different from the production code, after running it through compilation, minification, concatenation, or various other optimization processes.

This is where source maps come into play, by pointing out the exact mapping in our production code to the original authored code. In this introductory tutorial, we'll take a simple project, and run it through various JavaScript compilers for the purposes of playing with source maps in the browser.

What are Source Maps?

Source maps offer a language-agnostic way of mapping production code to the original code that was authored.

Source maps offer a language-agnostic way of mapping production code to the original code that was authored in your development environment. When we ultimately look at the code-base, generated and prepared for production, it becomes very challenging to locate exactly where the line mapping to our original authored code is. However, during compilation, a source map stores this information, so that, when we query a line section, it will return the exact location in the original file to us! This offers a huge advantage for the developer, as the code then becomes readable - and even debuggable!

In this tutorial, we'll take a very simple bit of JavaScript and SASS code, run them through various compilers, and then view our original files in the browser with the help of source maps. Go ahead and download the demo files and let's get started!

Please note that, while writing this article, Chrome (Version 23) supports JavaScript Source Maps, and even SASS Source Maps. Firefox should also gain support in the near future, as it's currently in an active stage of development. With that word of caution out of the way, let's now see how we can take advantage of source maps in the browser!

First, we must enable support in Chrome, using the following simple steps: 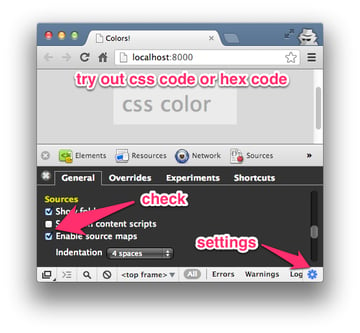 If you'd like to work along with this tutorial, download the demo and open the "start" directory. The files and directory structure is quite basic, with some simple JavaScript in scripts/script.js. You should be able to open index.html and even add some CSS color names or hex values to amend the background color. 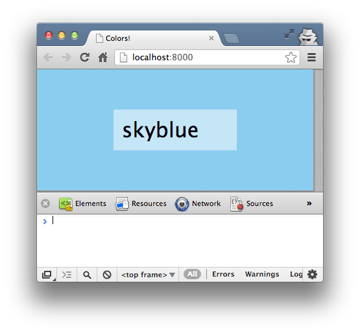 Have a look through the simple script files in plain JavaScript, TypeScript or CoffeeScript. Using various JavaScript compilers, we'll create a production-ready version, as well as generate the corresponding source maps.

In the following sections, we'll use five different ways to generate a compiled and minified script.js, along with the associated source map. You can either choose to test out all of the options, or simply go with the compiler that you are already familiar with. These options include:

Closure Compiler, by Google, is a tool for optimizing JavaScript. It does this by analyzing your code, removing irrelevant bits, and then minifying the rest. On top of that, it can also generate source maps.

Let's use the following steps to create an optimized version of script.js, using the Closure compiler: 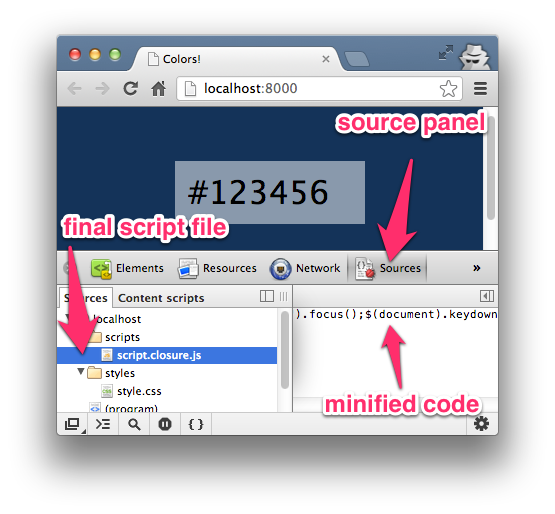 When we open index.html within the browser and navigate to the Source Panel in the developer tools, only the optimized version of script.closure.js is referenced; we have no way of making a relation back to our original, properly indented. Let's next create the source map file by executing the following command in the scripts directory:

Also, do try it out with breakpoints for debugging, but keep in mind that watch expressions and variables are not yet available with source maps. Hopefully, they will be in the future! 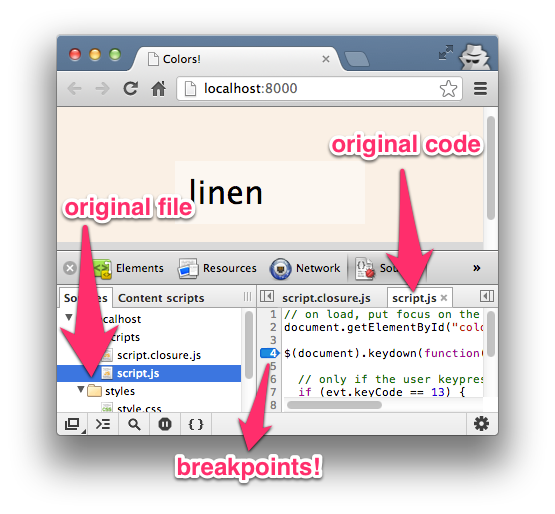 Option B: GruntJS Task for JSMin

If you already use Grunt.js for build processes, then the Grunt plugin for JSMin source maps will come in handy. Not only will it optimize your code, but it will also create the source map!

The following steps will demonstrate how to create an optimized version of script.js with the Grunt JSMin plugin:

With Grunt and the plugin, jsmin-sourcemap, the build process created two files: the optimized script file with the source mapping url at the bottom, as well as a source map. You will need both of these in order to view all of them in the browser.

UglifyJS2 is another JavaScript parser, minfier and compressor. Similar to the two alternatives above, UglifyJS2 will create an optimized script file, appended with a source mapping url as well as a source map file that will contain the mapping to the original file. To use UglifyJS, execute the following in the command line of the "start" directory:

For the previous three options, we only required a one-step optimization, from the original code to the optimized JavaScript. However, for languages like CoffeeScript, we need a two-step process: CoffeeScript > JavaScript > optimised JavaScript. In this section, we will explore how to create Multi-Level Source Maps with CoffeeScript and the CoffeeScript Redux compiler.

Navigate to the directory, "start," in the command line. In the following steps, we will map the optimized script file back to the CoffeeScript: 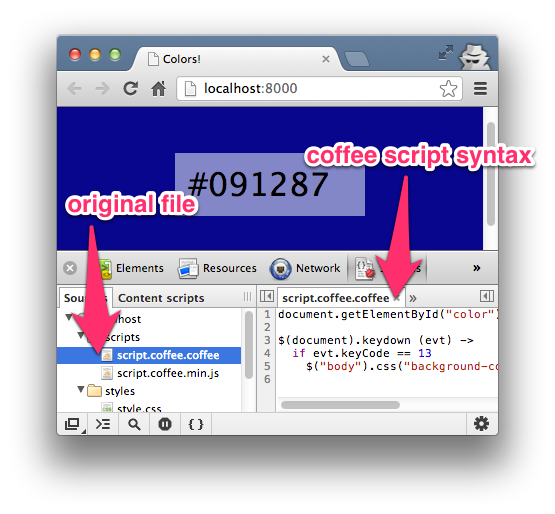 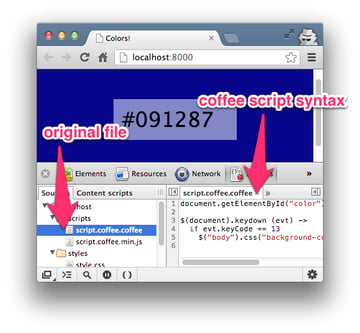 Navigate to the "scripts" directory from the command line, and execute the following command:

As with the CoffeeScript example, the next step is to use UglifyJS.

Finally, ensure that index.html links to the correct script file, scripts/script.typescript.min.js, and open it up in the browser! 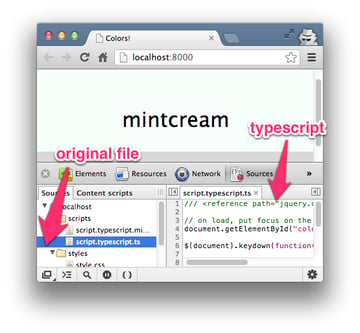 Beyond simply viewing the SASS file, if you are running LiveReload in the background and make changes to the SASS file, the page will also update to reflect the changes. For example, let's open up the project in Firefox, and inspect the page, using the Firebug extension. 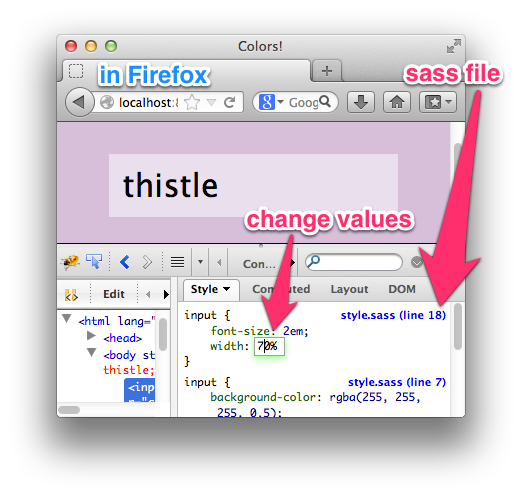 Information Within a Source Map

If we view any of the *.map files, it will contain the mapping information from the original file to the optimised file. The structure of a source map is typically in the JSON format, using the Version 3 specifications. It will usually contain the following five properties:

Source maps are still very much under active development, but, already, there are some great resources available around the web. Be sure to consider the following, if you'd like to learn more.

I hope that the above walk-through, using multiple compilers, has demonstrated the potential of source maps. Although the functionality is currently limited, hopefully, in the future, we'll have full debugging capability, including access to variables and expressions.

Tools & TipsWeb DevelopmentJavaScriptSass
Did you find this post useful?
Yes No
Would you like to provide feedback (optional)?
Cancel Submit
Want a weekly email summary?
Subscribe below and we’ll send you a weekly email summary of all new Code tutorials. Never miss out on learning about the next big thing.
Sign up

Sayanee Basu
I'm an independent developer from Singapore working mostly with startups on product development. Dabbling with web technologies such as Ruby, JavaScript, HTML5 and CSS3 is part of my daily work. I share my learnings through screencasts called Build Podcast. I'm a voracious reader and love to backpack to far away countries meeting interesting locals. Connect with me at @sayanee_.
Download Attachment
Looking for something to help kick start your next project?
Envato Market has a range of items for sale to help get you started.