Setting Up the Development Environment

Before we can start creating iOS applications, we need to set up the development environment. This tutorial will show you how to register as an iOS developer and install the development tools you'll need to get started.

The primary focus of this tutorial is getting started with Xcode. Xcode is an outstanding Integrated Development Environment (IDE) developed by Apple and the vast majority of both iOS and OS X developers rely on it for building applications.

Xcode is only compatible with Apple's OS X and I am therefore assuming that you have a Mac capable of installing the software. I will be using Xcode 5 throughout this series. This particular version of Xcode requires OS X 10.8 or higher. Even though it is possible to create iOS applications with an older version of Xcode, I recommend that you also use Xcode 5 to make sure that you don't run into unexpected issues along the way.

If you aren't a registered iOS developer yet, you'll need to sign up in order to follow along. To start the registration process, head over to the iOS Dev Center. Creating an iOS developer account only takes a few minutes. 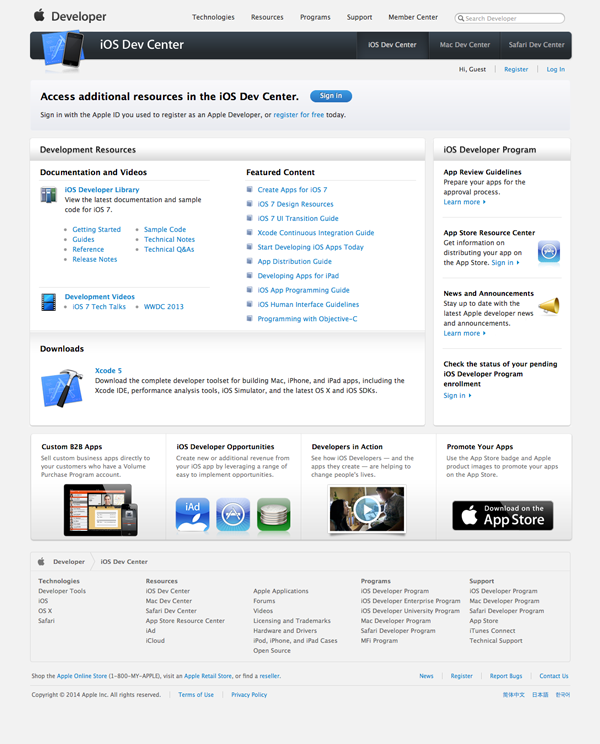 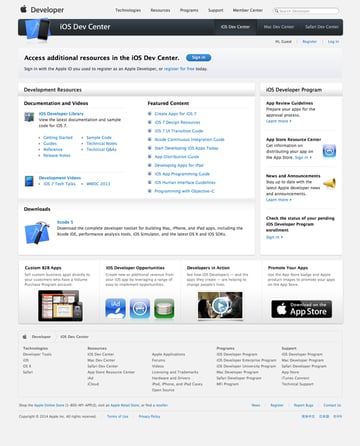 If you choose to enroll in the paid iOS Developer Program, then you'll need to take a few extra steps. You can find the necessary information at the iOS Dev Center. The process can take a few days to complete since Apple manually approves each application. For more information, visit Apple's developer support center.

The name Xcode can be somewhat confusing at first. The name Xcode is often used to refer to the entire toolset for iOS and OS X development, and that toolset includes the Xcode IDE, the iOS Simulator for running applications, and the actual iOS and OS X SDKs. However, it's important to understand that the Xcode application itself is just an IDE and when I use the term I'm typically referring to just that.

You have barely touched your computer and we are already set up and ready to create iOS applications. Those of you familiar with the process for setting up the Android SDK should appreciate this simplicity. With Xcode installed, it is time to launch it for the first time. If all went well, you should see the Welcome to Xcode window, which contains a few useful links and helps you create a new application. To create your first iOS application, select Create a new Xcode project from the list of options. What is an Xcode project? An Xcode project is a folder or package that contains all the necessary files and components to manage and build your application.

Xcode makes it easy to create a new Xcode project by offering a handful of useful project templates. The Single View Application template is a good choice for your first application. Select it from the list of templates and click Next.

The next window lets you configure your Xcode project. Fill in the fields as shown in the screenshot below and click Next. In an upcoming article in this session, I will explain each of the configuration options in more detail. The focus of this article is getting your first application up and running in the iOS Simulator.

In the final step, Xcode asks you to specify a location for storing your new Xcode project. It doesn't really matter where you save the project as long as you can find it later. You'll also notice that Xcode offers the option to create a local git repository for your project. I highly recommend that you use source control for any type of development. Git is an excellent choice and it is the most popular Source Control Management (SCM) system among iOS and OS X developers. 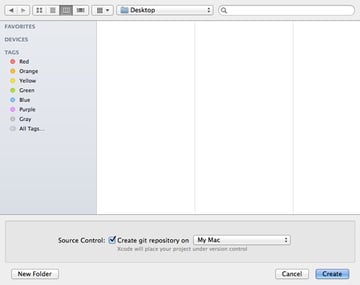 It is important to get familiar with source control management if this is new to you. Source control is indispensable in software development for various reasons. To begin using Git, you can visit Git's website or read its Wikipedia article. There's also an excellent book by Scott Chacon that discusses Git in more detail.

You have successfully set up your first Xcode project. Believe it or not, running your application in the iOS Simulator is only one click away. On the far left of the Xcode toolbar, you can see a large play button.

Before you run your application, make sure that the active scheme is set to iPhone Retina (3.5-inch). We will cover schemes in more detail later on in the series. Take a look at the next screenshot to make sure we're on the same page.

In spite of its shortcomings, the iOS Simulator is a very capable tool. Select the iOS Simulator and take a look at its menu and the various options it provides. The simulator is perfectly suited for testing user interfaces on different form factors, mimicking simple gestures, simulating memory warnings, or taking screenshots for the App Store. You'll find it a very useful tool for iOS development.

As I mentioned earlier, running an application on a physical device is only possible if enroll in the paid iOS Developer Program. In addition, running an application on a physical device involves a few extra steps. These steps include configuring your project and setting up the device you plan to test with. Because this is a fairly complex topic, especially if you are new to iOS development, I will thoroughly explain how to do this in a separate article in this session.

I would like to end this article by listing a handful of third party tools that make iOS development easier and more enjoyable. Note that these applications are by no means required for iOS development. However, knowing that they exist may save you a lot of frustration in the future.

I hope you agree that setting up the development environment for iOS development is easy. With Xcode installed, we can start exploring the iOS SDK. That will be the focus of the rest of this session.

Mobile DevelopmentiOS SDKXcodeiOS 7
Did you find this post useful?
Yes No
Would you like to provide feedback (optional)?
Cancel Submit
Want a weekly email summary?
Subscribe below and we’ll send you a weekly email summary of all new Code tutorials. Never miss out on learning about the next big thing.
Sign up

Bart Jacobs
Bart Jacobs runs Code Foundry, a mobile development company based in Belgium and writes about iOS and Swift development on Cocoacasts.
_bartjacobs
Download Attachment
Looking for something to help kick start your next project?
Envato Market has a range of items for sale to help get you started.