Web apps can be split into two major components: a front-end that displays and collects information, and a back-end for storing the information. In this article, I'll demonstrate what a relational database is, and how to properly design your database to store your app's information.

A database stores data in an organized way so that it can be searched and retrieved later. It should contain one or more tables. A table is much like a spreadsheet, in that it's made up of rows and columns. All rows have the same columns, and each column contains the data itself. If it helps, think of your tables in the same way that you would a table in Excel.

Data can be inserted, retrieved, updated, and deleted from a table. The word, created, is generally used instead of inserted, so, collectively, these four functions are affectionately abbreviated as CRUD.

A relational database is a type of database that organizes data into tables, and links them, based on defined relationships. These relationships enable you to retrieve and combine data from one or more tables with a single query.

But that was just a bunch of words. To truly understand a relational database, you need to make one yourself. Let's get started by getting some real data with which we can work.

Step 1: Get Some Data

In the spirit of the Nettuts+ Twitter clone articles (PHP, Ruby on Rails, Django), let's get some Twitter data. I searched Twitter for "#databases" and took the following sample of ten tweets:

Here's what each column name means:

MySQL is used at just about every Internet company you have heard of.

This is all real data; you can search Twitter and actually find these tweets.

Second, there is repetitive data across rows.

@AndyRyder5 and @Brett_Englebert each tweeted twice, so the rest of their information has been duplicated.

Duplicates are problematic because it makes the CRUD operations more challenging. For example, it would take longer to retrieve data because time would be wasted going through duplicate rows. Also, updating data would be an issue; if a user changes their Twitter handle, we would need to find every duplicate and update it.

Repetitive data is a problem. We can fix this problem by splitting Table 1 into separate tables. Let's proceed with first resolving the repetition across columns issue.

As noted above, the "username" and "following_username" columns in Table 1 are repetitive. This repetition occurred because I was trying to express the follow relationship between users. Let's improve on Table 1's design by splitting it up into two tables: one just for the following relationships and one for the rest of the information. 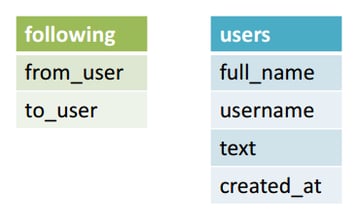 Edgar F. Codd, the computer scientist who layed down the theoretical basis of relational databases, called this step of removing repetitive data across columns the first normal form (1NF).

Now that we've fixed repetions across columns, we need to fix repetitions across rows. Since the users @AndyRyder5 and @Brett_Englebert each tweeted twice, their information is duplicated in the users table (Table 3). This indicates that we need to pull out the tweets and place them in their own table. 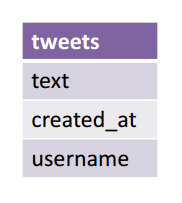 As before, "text" stores the tweet itself. Since the "created_at" column stores the timestamp of the tweet, it makes sense to pull it into this table as well. I also include a reference to the "username" column so we know who published the tweet. Here is the result of placing the tweets in their own table:

After the split, the users table (Table 5) has unique rows for users and their Twitter handles.

Data can be inserted, retrieved, updated, and deleted from a table.

So far, Table 1 has been split into three new tables: following (Table 2), tweets (Table 4), and users (Table 5). But how is this useful? Repetitive data has been removed, but now the data is spread out across three independent tables. In order to retrieve the data, we need to draw meaningful links between the tables. This way we can express queries like, "what a user has tweeted and who a user is following".

The way to draw links between tables is to first give each row in a table a unique identifier, termed a primary key, and then reference that primary key in the other table to which you want to link.

Is the "username" column the best idea for a primary key for the users table?

On one hand, it's a natural key — it makes sense to search using a Twitter handle instead of assigning each user some numerical ID and searching on that. On the other hand, what if a user wants to change his Twitter handle? That could cause errors if the primary key and all referencing foreign keys aren't updated accurately, errors that could be avoided if a constant numerical ID was used. Ultimately the choice depends on your system. If you want to give your users the ability to change their username, it's better to add a numerical auto-incrementing "id" column to users and use that as the primary key. Otherwise, "username" should do just fine. I'll continue to use "username" as the primary key for users

Let's move on to tweets (Table 4). A primary key should uniquely identify each row, so what should the primary key be here? The "created_at" field won't work because if two users tweet at the exact same time, their tweets would have an identical timestamp. The "text" has the same problem in that if two users both tweet "Hello world," we couldn't distinguish between the rows. The "username" column is the foreign key that defines the link with the users so let's not mess with that. Since the other columns are not good candidates, it makes sense here to add a numerical auto-incrementing "id" column and use that as the primary key.

Table 6: The tweets table with an "id" column

We've accomplished a lot so far. We removed repetitions across columns and rows by separating data into three different tables, and then we chose meaningful primary keys to link the tables together. This entire process is called normalization and its output is data that is cleanly organized according to the relational model. The consequence of this organization is that rows will appear in the database only once moving forward, which in turn make the CRUD operations easier.

Fig. 4 diagrams the finalized database schema. The three tables are linked together and the the primary keys are highlighted. 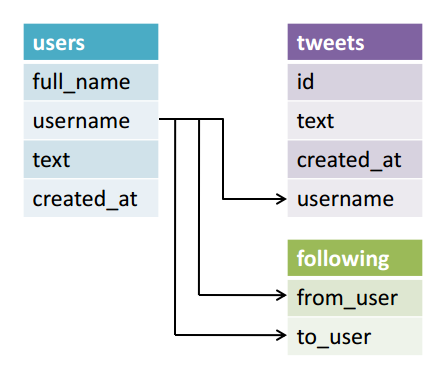 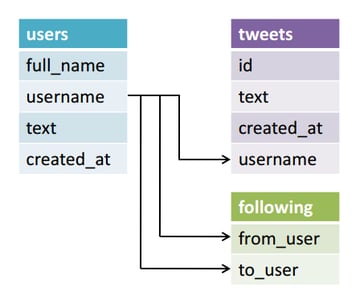 There are small variations in SQL between each RDBMS vendor, termed SQL dialects.

MySQL is used at just about every Internet company you have heard of. In context of this article, Twitter uses MySQL to store their users' tweets.

SQLite is common in embedded systems. iOS and Android let developers use SQLite to manage their app's private database. Google Chrome uses SQLite to store your browsing history, cookies, and your thumbnails on the "Most visited" page.

PostgreSQL is also a widely used RDBMS. Its PostGIS extension supplements PostgreSQL with geospatial functions that make it useful for mapping applications. A notable user of PostgreSQL is OpenStreetMap.

Once you've downloaded and set up an RDBMS on your system, the next step is to create a database and tables inside of it in order to insert and manage your relational data. The way you do this is with Structured Query Language (SQL), which is the standard language for working with RDBMSs.

Here's a brief overview of common SQL statements that are relevant to the example Twitter data above. I recommend you check out the SQL Cookbook for a more complete application-driven list of SQL queries.

SQL is pretty similar to regular English sentences. There are small variations in SQL between each RDBMS vendor, termed SQL dialects, but the differences are not dramatic enough that you can't easily transfer your SQL knowledge from one to the other.

In this article, we learned how to design a relational database. We took a collection of data and organizing it into related tables. We also briefly looked at RDBMS solutions and SQL. So get started by downloading an RDBMS and normalizing some of your data into a relational database today.