In this Quick Tip we will create a custom crosshair along with a gunshot sound. This could be the basis for a shoot-'em-up game. In this example, we place bullet holes on the stage at the point where you click.

Note: In spite of the new Native Cursor feature introduced in FP10.2 this old-school method is still a valid way of creating a custom cursor. It has the advantage of allowing you to use bigger graphics, plus it'll work with older versions of Flash Player. We'll take a look at Native Cursor's in FP10.2 tomorrow :)

In the SWF you'll see a Start button. When you click this button, your mouse becomes a crosshair ready to do some damage. As you click around on the stage, a gunshot sound plays and a bullet hole graphic gets added to the stage at the point where you clicked with the mouse.

Step 1: Setting Up the Document

Open a new Flash Document and set the following properties

Step 2: Setting up the Game Elements

For the Start Button, I drew a rounded rectangle and placed some text with the word Start on it. I then converted the Button and Text to a MovieClip by drawing a selection around them and pressing F8. I gave the button the name startGame, and also used startGame as the Instance Name in the Properties panel. If the Properties panel is not showing for you, go to Menu->Window->Properties or just press CTRL+F3.

Included in the exercise files are two images: one is the crosshair graphic, and the other is the bullethole graphic. I imported these one at a time to the stage and converted them to a MovieClip by clicking on them and pressing F8. I gave them the instance names "BulletHole" and "CrossHair", made sure the registration points were set to the center in both cases, and used the same name for the Class in the Linkage of each symbol. Below is an image of how I set up the BulletHole; it is the same for the CrossHair. 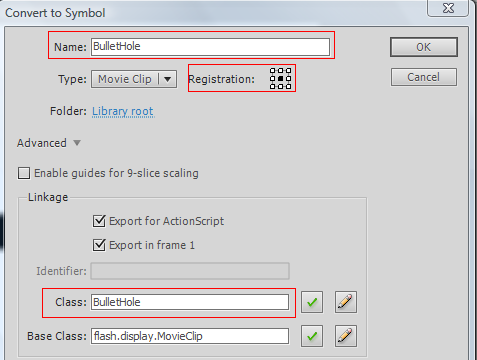 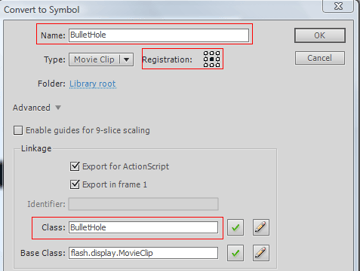 For the sound, I imported it to the Library then right-clicked it and selected Properties. I then gave it the name GunShot and set the Linkage Class as GunShot as well.

Now that we have all our game elements ready we can dive into the code.

Step 3: Set up the Package and Main Class

First we import some classes we will need, then we set up our document class. This main class must extend either MovieClip or Sprite; here we extend MovieClip. We then declare some variables we will be using, and code our constructor function. The constructor function adds an Event Listener to the button, which is where we set up the rest of the game.

The startTheGame() function is called when the user clicks on the button. This function removes the button from the stage, hides the Mouse,and adds the crosshair to the stage. We then add two Event Listeners to the stage.

The moveCursor() function is called whenever the user moves the mouse, due to the MOUSE_MOVE event listener we added to the stage. In this function we simply make sure the crosshair is at the same position as the Mouse by using mouseX and MouseY.

The fireShot() function is called whenever the user clicks on the stage. We first check to see if this is the first time the user clicked; if it is not, then we play the gunshot sound and add the bulletHole to the same position on stage where the user clicked by using e.stageX ande.stageY. The event holds information about itself -- you can see what it contains by using trace(e.toString()).

If we did not check if this was the first time, then when the user first clicked on the Start button it would add a crosshair and play the gunshot sound (we don't want that).

This could be the basis for many shoot-'em-up type games.It would be very easy to spawn some enemies and then do a hitTestPoint() check with the mouse's X an Y against the enemy's display object.

I hope you have enjoyed this tutorial. Thanks for reading!

James Tyner
James Tyner is a Mobile and Web Application Developer residing in North Carolina. When he is AFK he likes to play guitar and study Theology.
Download Attachment
Looking for something to help kick start your next project?
Envato Market has a range of items for sale to help get you started.