When Collis launched this site and asked readers for tutorial requests, a common one was for a "magazine themes" how-to for blog platforms. This tutorial focuses on the first part of the process: applying a CSS grid to the design to prototype a home page template.

You can see a demo of this tutorial by clicking on the "Demo" button, below. For the source, the ZIP file download does not include the Blueprint CSS code.

The focus here is on an web page design example using the Blueprint CSS grid framework, based on my earlier Which CSS Grid Framework article. However, you can apply the same process to any CSS grid framework you prefer. If you don't like using grid frameworks on production sites, you can always replace the CSS code and corresponding HTML classes with your own.

The page design shown below is influenced by numerous WordPress magazine themes, so you might see familiar design elements, though this is not a WP-specific tutorial.

Let me point out that I am only an "armchair", self-taught designer, and the minimalist nature of my design will reflect my lack of proper training. Hopefully that allows you to focus on the general grid design and coding process, which is based on geometric elements, not on style.

A typical design process for web pages is to start with a sketch on paper, followed by a graphic mockup in Photoshop or Fireworks, etc. Drop in all the design elements, positioned approximately where you want them. Later, in the CSS grid-based design phase, you'll determine exact measurements.)

FilmPundits is a site owned by a friend that I'm building up. The mockup below is one of several "FilmScenic" designs that I've prototyped. The topic of film just lends itself to this example because of the widescreen-style images. 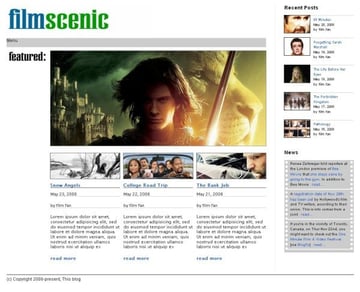 If you want to use a similar design for non-film topics, just adjust the image heights to make them look less widescreen-y. For my design needs, the largest image has to have the most impact. So the composition is positioned slightly off-center, horizontally. This makes the whole page a bit more dynamic and draws the eye to the most important elements.

Let's look at the "guide" lines, below, that form the design grid for the mockup above. 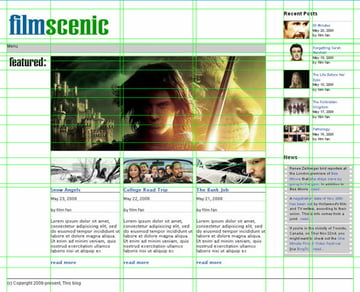 Use your favorite graphics software to turn the guide lines into a "slice" map: 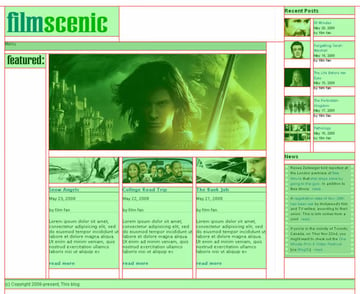 If you are not using a CSS grid, you would either manually code your web page and CSS file at this point, or let your software generate the code for you.

Now that we have a graphic design mockup, we need to translate that into HTML and CSS code. To reiterate, using a CSS grid framework speeds up the prototyping process. You can measure your design elements in pixel widths and finetune to suit the CSS grid that you are using. (I'm not getting much into vertical positioning because I tend to control that with image heights and top/bottom margins.)

Here is the process I typically use to apply CSS grids, which treats the graphic design mockup as an aside. You'll have to adjust this to suit your needs.

If you're a real designer, unlike myself, you'll probably do most of the design mockup in your favorite graphics editing package. I generally prefer to sketch on paper, then mock up on the fly using HTML and CSS (both Blueprint and custom classes), as discussed below.

Now that you have a mockup of your page layout, you can start coding in HTML and CSS. Here is a rough process of the actual coding steps:

To make the above processes clearer, let's have a look at some actual HTML and CSS code fragments for the film site design example pictured earlier. Keep in mind that I've gone extreme with the non-Blueprint div tags purely for clarity in this tutorial. You will probably want to strip out any excess classes, possibly merge nested div tags.

Note also that I've used some "ugly" non-Blueprint CSS class names for clarity. They are all preceded by "fs-", followed by a functional name, to make it clear what I'm using them for.

I've coded five stages for this tutorial, to illustrate the refinement process in HTML and CSS. Normally, I'd compress stage 1-3.

These steps will be clearer in the sections below.

To start off with, we want to set up the HTML file:

Now roughly block off the entire page (container) into three CSS-controlled sections: fs-mainblock, fs-sidebar, and fs-footer. You can see this in the HTML code below, which fills in some of the div.container element we introduced earlier:

You'll notice that the divs above use both custom classes and Blueprint classes (span-18, colborder, span-5, last, span-24). The "last" class is very important, otherwise the fs-sidebar section default right margin will not be turned off, and the section will render below the fs-mainblock section instead of beside it. The colborder draws a vertical line between fs-mainblock and fs-sidebar, and takes up a column by itself. This is not reflected in the "span-18" value. In theory, the mainblock actually takes up 19 columns (19+5 = 24 columns, the Blueprint default).

Now we add classes to the custom stylesheet for these three blocks (see below). Note: some of these are temporary, to demonstrate the block rectangles on screen while refining the design. Consult the final style.css file instead of using exactly the rules presented in the CSS code snippets below.

The CSS above results in the rough mockup below: 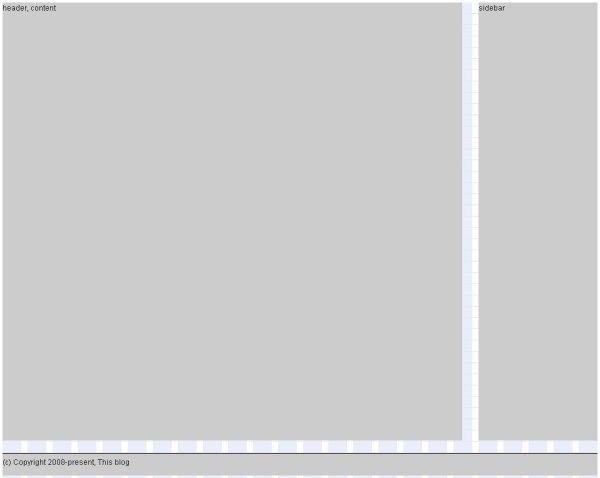 As before, classes for the new sections are added to the custom stylesheet, style.css. Each section's height is approximated where necessary, and we're once again adding a temporary background to some of the elements, which will be removed in the final style.css file. Here are some additional CSS rules:

This results in the following mockup: 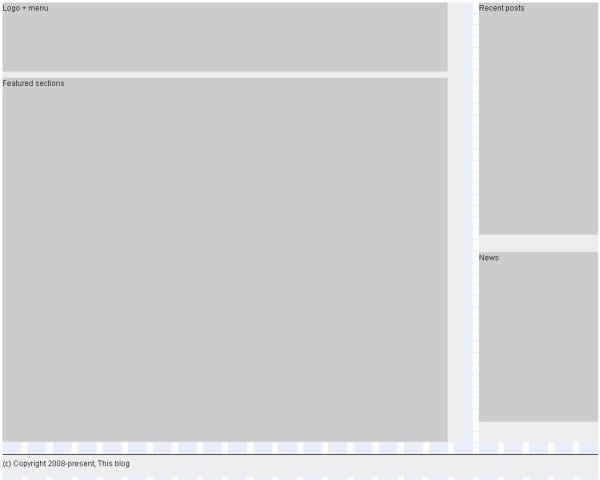 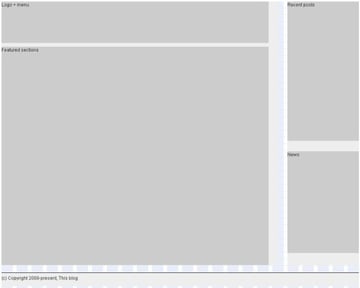 This is the final stage in the mockup process. We add sections for all remaining design elements:

Here is how our div.container looks now:

As you can see, there are a lot of nested divs used. Some of it is merely for clarity in this tutorial. For the rest, on a production site, you can compact some of it or replace the Blueprint classes with your own. Some people prefer to use caching on their sites, when using "magazine" themes with grid frameworks - though that's out of scope for this tutorial.

Each of the new classes gets added to the custom stylesheet, with temporary heights and backgrounds:

This results in our final mockup stage, which looks fairly close in geometries to our "sliced" graphic design mockup: 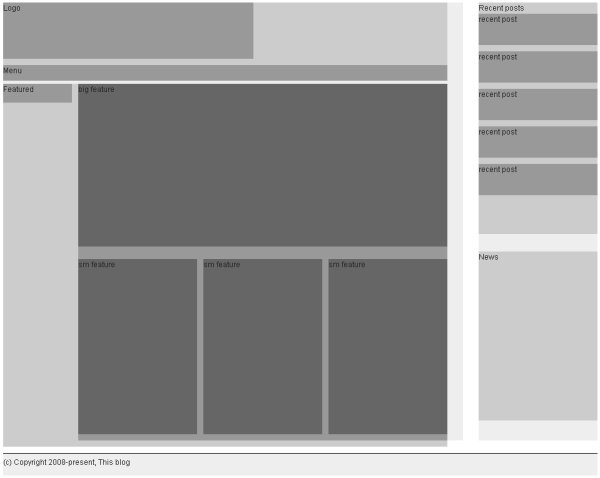 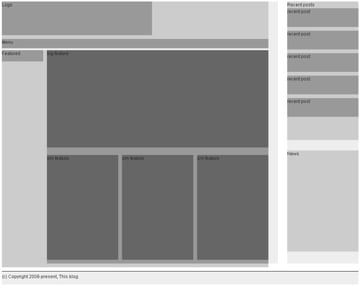 This is the final step in the coding process, where we drop in actual design elements, do cleanup on excess divs and classes, and get rid of any "blocking" elements:

Now we have our final design, below, which is the same as at the top of this tutorial:

The final files have none of the gray-blocked elements, and there are additional verbose comments in the style.css file that should help you decipher the purpose of each custom class. The ZIP file includes images cropped from various movie posters, which are the copyright of their respective owners. The Blueprint CSS grid files are not included in the ZIP.

Please note that some minor discrepancies might exist between the source files and the code presented above.

Some final comments on the example in this tutorial:

This is not a complex example, nor a full theme for a blog platform, but I hope it helps you to understand how to use CSS grids for web page design. While the code here is for a static page, the next step is to integrate it with a blog platform to produce a homepage template.

HTML & CSSWeb DevelopmentCSSHTML
Did you find this post useful?
Yes No
Would you like to provide feedback (optional)?
Cancel Submit

Raj Dash
Raj Dash is a multi-blogger, math/computer geek, cook, composer, philosopher, former search engine webmaster, former publisher/editor, and published writer and author. You can find his hubsite at Chameleon Integration, which will lead you directly or indirectly to some of his active blogs and zomblogs.
Weekly email summary