As software developers, we spend a lot of time extracting and displaying data from many different data sources. Whether it's a XML webservice of some sort, or a full featured relational database, we have been forced to learn different methods of data access. Wouldn't it be great if the method of access was the same for all data sources? Well, we are in luck because, as of the release of C# 3.0 and the .NET 3.5 Framework, LINQ has come to change the game forever.

On the .NET platform we have been and still are utilizing ADO.NET
for accessing different data sources. The open source community has also provided
the developers with a number of alternatives.

Language Integrated Query is the new addition to the .NET
family and as the name suggests it's the kind of query style data access which
is fully supported by the language to effectively unify the way we access data
and to make our lives easier. LINQ is able to target a number of different sources namely Oracle,
MSSQL, XML and a few others, but for now we will focus on the most basic of
all, LINQ to Objects.

Normally, to process and refine the data within our lists
and various other data structures, we have used either the 'foreach' loop or another
type of looping method to iterate through the objects and process them one by
one according to some condition. This is fine, but frankly it requires a lot of
basic coding that we all wish we didn't have to write. Essentially we've had to tell the
compiler every single detail of the process in order to manipulate the data.

This is exactly where LINQ shines best. What LINQ allows us
to do is to simply tell the compiler what we'd like to perform and let the compiler work
out the best way to actually achieve that. If you've used SQL syntax before, the massive resemblances
between LINQ and any dialects of SQL will be the first thing that you'll notice.
Like SQL, LINQ too supports the "select", "from", "where", "join", "group by"
and "order by" keywords. Here is a simple example of querying a list of objects:

The first part of the preceding code simply populates a list
with four instance of the 'Car' class. The next part of the code, however, uses the
"from" and "select" keywords to select a group of objects. The main difference
between SQL and LINQ is that the "from" keyword comes before the "select"
keyword because we must first define the object we want to operate on. Finally
the "select" clause tells the compiler what we wish to extract in this query. The above
code simply extracts everything that is in the list and assigns it to the "QueryResult"
variable.

When we query things from objects (LINQ to Objects) our
queries always return an "IEnumrable<T>" list of objects. Essentially the
"IEnumerable" type is the kind of list that exposes the enumerator, which
supports a simple iteration over a non-generic collection, and <T>
is the type of each entry in the list.

Don't worry if you aren't familiar with "enumerators" and "generics". Just
remember that the result of LINQ queries is always a collection like data
structure which allows for iterating through it using a loop like shown
bellow:

We learned that LINQ always returns a collection structure similar
to any other lists. However, the LINQ query does not execute until its result is
accessed by some other piece of code, like the "foreach" loop above. This is to
allow us to continuously define the query without the overhead by re-evaluating
each new step in the query.

So far so good; but most of the time, our queries will need
to be more complex; so let's try projecting data. In SQL, Projection means selecting
the name of the column(s) of table(s) which one wishes to see appearing in the result
of the query. In the case of LINQ to Objects, performing Projection will result
in a different query result type than the type of object that we perform the
query on.

There are two kinds of Projections that we can do. We can
either perform a Projection based on an existing object type, or go completely
the other way by using anonymous types. The following example is of the first
kind:

In the preceding code, the type of the query result is declared as
<CarOwner>, which is different to <Car>, the type that 'ListOfCar' variable is initialized with. We have
also used the "new" keyword and have done some assignments inside the curly
brackets. In the above code, using "select" with the "new" keyword tells the
compiler to instantiate a new 'CarOwner' object for every entry in the query result.
Also by assigning values to the new type we have initialized each instance
of the 'CarOwner' class.

Nonetheless, if you don't already have a type defined to
use, you can still perform projections using anonymous types.

It would be a big hassle if, for every Projection, you were
forced to create a new type. That is why, as of C# 3.0, support for Anonymous
types was added to the language. An Anonymous type is declared using the "var"
keyword. It tells the compiler that the type of the variable is unknown until
it's assigned for the first time.

The above is an example of performing a query with Anonymous
types. The only catch to look out for is that the compiler will not
allow returning Anonymous types from methods. 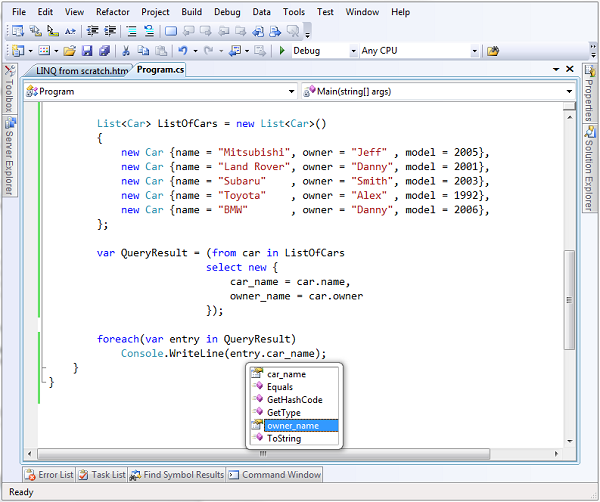 Usually as part of the LINQ query, we also need to refine the
query result by specifying a condition. Just like SQL, LINQ too uses the "where"
clause to tell the compiler what conditions are acceptable.

The preceding code demonstrate the use of the "where" clause and
the condition to follow. To further to define multiple conditions, LINQ supports
the 'and' (&&) and 'or' (||) constructs. The "where" part of the query has to always be a
Boolean expression, otherwise the compiler will complain.

When querying objects, it's possible to rely on the query
target being already sorted. If that isn't the case, LINQ can take care of that
by using the "order by" clause which will ensure the result of your query is
properly sorted.

If you run the above code, you'll see that the result of the
query is sorted in ascending order. You can alter the order by using the "ascending" and "descending"
keywords, and further change the order by specifying more than one field to sort
by. The following code shows how:

LINQ also allows grouping the query result by the value of a
specific property as shown in this example:

As you can see, LINQ supports the "group by" clause to
specify what object and by what property to group by. The "into" keyword will
then allow us to project on a grouping result which can be accessed by the "Key"
property.

In the above code, using an Anonymous type, we have joined
the two objects in a single query result.

So far, we've learned how we can use LINQ to build a flat
list query result. With LINQ, it's also possible to achieve a hierarchical query
result using "GroupJoin". In simple words, we could assign objects to
properties of every entry with LINQ query.

In the above example, the "Join" clause is followed by an "into"
part. This differs to the previous join operation that we looked at. Here, the "into"
clause is used to group cars by the owner (into carsGroup) and assign the grouping to the
"cars" property of the anonymous type.

Thus far, everything that we've seen has been supported by the C# 3.0
syntax. However, there is still a large number of operations that C# 3.0 does not
support. The standard query operators provide query capabilities including
filtering, projection, aggregation, sorting and more. These operations are therefore supported
as methods of the LINQ library and can be executed on result of a query like shown in the
following screenshot: 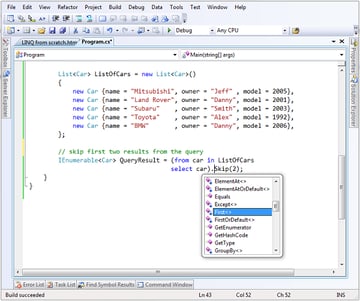 These operators are listed below for your reference.

LINQ has proven itself to be very useful for querying objects, and the SQL-like syntax makes it easy to
learn and use. Also, the vast number of Standard Operators makes it possible to chain a number of operators
to perform complex queries. In a follow-up to this tutorial, we'll review how LINQ can be used to
query databases and XML content..

Arman Mirkazemi
N/A
Scroll to top
Looking for something to help kick start your next project?
Envato Market has a range of items for sale to help get you started.