Prior knowledge of the basic usage of Stardust is required to continue reading this tutorial. If you're not familiar with Stardust, you can check out my previous tutorial on the subject, Shoot out Stars with Stardust Particle Engine, before going on.

Let's take a look at the final result we will be working towards. This is an example of a custom vortex gravitational field.

It's time for some quick flashback on high school physics. Remember basic kinematics? It's all about displacement, which is just a fancier way to say "position," and its relation to time. For the scope of this tutorial, we only need a rather simple grasp of the topic.

Displacement means the current position of an object. In this tutorial the "objects" we are mainly dealing with are particles in 2D space. In 2D space, the displacement of an object is represented by a 2D vector.

Another thing worth mentioning is the concept of vector fields. You can basically view a vector field as a function that takes a vector as its input and outputs another vector. Gravitational fields are a kind of vector fields that take position vectors as inputs and output acceleration vectors. For example, in physics simulation, usually a uniform gravity pointing downward is applied to all objects; in this case, the gravitational field representing the gravity is a vector field that outputs a constant vector (pointing down), no matter what the input position vectors are. 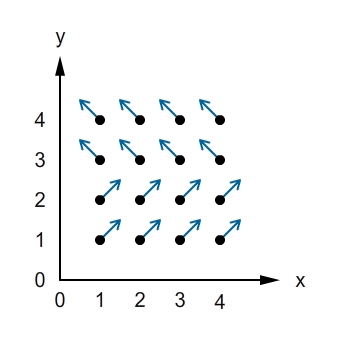 The Field.getMotionData() method takes a Particle2D object, containing a particle's 2D position and velocity information, as parameter. This method returns a MotionData2D object, a 2D vector "value object" that is consisted of x- and y-components. Combined with the Gravity action, a Field object can be used as a gravitational field, whose output is used to manipulate particle velocity.

That's all for our high school physics recap. Now it's time for some real Stardust stuff.

As previously mentioned, the Gravity action class makes use of Field objects as gravitational fields to manipulate particle velocity. Here's how you create a uniform vector field, a vector field that returns a constant vector no matter what input is given, and wrap it into a Gravity action.

This Gravity action is now ready to be used in the same way as any other ordinary Stardust actions.

We are going to create a windy rain effect using the Gravity action.

Create a new Flash document, choose a dark color for background, draw a raindrop on the stage, and convert the raindrop to a movie clip symbol, exported for ActionScript with a class name "Raindrop". Delete the raindrop instance on the stage afterward. 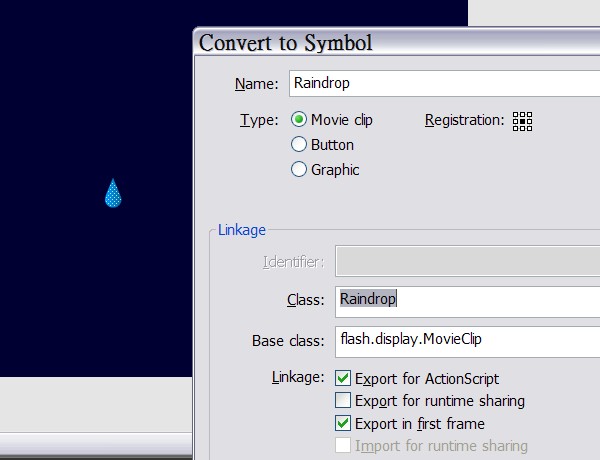 Now we're going to create an AS file for the document class, and an AS file for the rain emitter. I won't explain the code here, since I've already covered the basic usage of Stardust in my previous tutorial. If you're not familiar with Stardust or you need some refreshment, I strongly recommend that you read my previous tutorial before moving on.

This is the document class.

And this is the emitter class used in the document class.

Now we're going to make the rain effect windy by adding a uniform gravitational field that "pulls" the raindrops to the right. Add the following code in the constructor of the RainEmitter class.

Note that we set the Field.massless property to false, which is true by default. When set to true, this property causes fields to act like ordinary gravitational fields, affecting all objects equally regardless of their mass. However, when the property is set to false, particle mass is taken into account: particles with larger mass are less affected by the field, whereas particles with smaller mass are affected more. That is why we used the Mass initializer in our previous emitter code, to add some randomness into the rain effect.

Test the movie again, and this is what our outcome looks like. Raindrops are now affected by a gravitational field and are all "pulled" to the right.

Now we're going to swap the UniformField object with a BitmapField object, returning vector fields based on a bitmap's color channels, to create a turbulence effect. If you've worked with ActionScript for a while, you might be expecting to use the BitmapData.perlinNoise() method when thinking of turbulence, and that's exactly what we're going to do.

Let's say we have a bitmap field whose X channel is set to red and Y channel is green. This means when the field takes an input vector, say, (2, 3), it looks up to the bitmap's pixel at (2, 3) and the output vector's X component is determined from the pixel's red channel, and the Y component is determined from the green channel. When the components of an input vector are not integers, they are rounded first.

Create a new Flash document. Draw an arrow on the stage, convert it to a symbol named "Arrow" and export it for ActionScript. 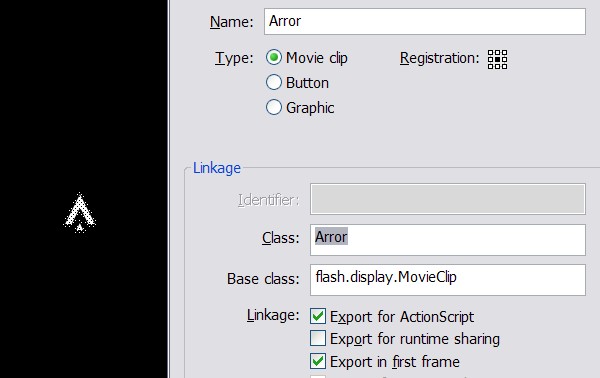 Create an AS file for the document class. This is almost the same as the previous example.

Create another AS file for our emitter class.

Add the following code that creates a 640-by-480 Perlin noise bitmap data in the emitter constructor. For detailed explanations on each parameter of the BitmapData.perlinNoise() method, you can refer to this documentation. To make it simple, the following code creates a Perlin noise bitmap with "octaves" roughly of the size 50X50, and the noise consists of red and green color channels.

Next, create a BitmapField object and assign the bitmap data to it through the update() method. Then the rest of the code concerning the Gravity action is exactly the same as the previous example.

Now test the movie again, and you shall see our flying arrows are now experiencing turbulence.

We've used the UniformField and BitmapField provided by Stardust, and now we're going to create our own custom fields by extending the Field class and overriding the getMotionData2D() method.

Below is the visualized graph of our vortex field. It's pretty self-explanatory why it's called a vortex field.

Here's the formula for our vortex field.

And the vortex field class is as simple as the code below. We've made use of the Vec2D class to do all the dirty work of rotating a vector by 90 degree clockwise and setting the vector's absolute value. Then, we dump the vector's x- and y-components into a MotionData2D object, which is of the object type to be returned.

Now that we have our custom field, let's test it out in the following example.

This example serves as a test drive for our vortex vector field. It's as simple as swapping a field with a new one. Change the following code from the previous example from this

And we're done. You may test the movie and see the vortex effect. Sweet!

You have seen how to use the Gravity action and Field class to affect particle velocity. And you've learned how to create your own custom vector fields to be used as gravitational fields. The next part of this tutorial will show you how to make use of deflectors to manipulate both particle position and velocity at once.

Thank you very much for reading! 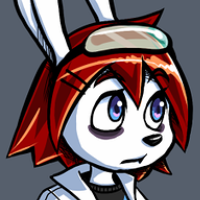 Allen Chou
I am a Computer Science student studying at DigiPen Institute of Technology, focusing on game development. I have experience in computer graphics, constriant-based rigid body physics, game engine architecture, gameplay programming, and visual feedback design. You can find out more about me at AllenChou.net
Weekly email summary