PHP is so much more than a scripting language. It's a full-fledged language capable of building very complex applications. By harnessing the full power of Object Oriented Programming, you can reduce the amount of time you spend coding and use it to build better websites. This tutorial will show you how.

OOP stands for Object Oriented Programming. OOP is a programming paradigm wherein you create "objects" to work with. These objects can then be tailored to your specific needs, to serve different types of applications while maintaining the same code base. Quite useful indeed.

What is an object?

An object is simply a copy or instance of a "class". A class can be defined as a "black box" from where we create our objects and access its attributes (variables) and methods (functions). The most common analogy given when explaining classes and OOP is how you drive a car: basically, you have 2 or 3 pedals, a gear stick and a steering wheel. You don't need (and most probably don't want) to know how the car works when you press the pedals. You just want your car to go back and forth, left and right. And OOP is precisely that. You don't need to know how the methods of a class work (if you didn't implement it yourself), just what they do. OOP is also useful if you have a large number of objects of the same type in a system: you just have to create the objects and then manipulate them all in the same way, without rewriting any code. Moreover, an object is able to maintain it's state (variable values and such) throughout the execution of the program.

The implementation of "Car" is hidden from us, however we can use its full capacities.

PHP 5 (although most of the ideas in this article also apply to PHP 4) has great support for object oriented programming by providing easy class creation. PHP provides every paradigm other "true" OOP languages implement (Python and JAVA, for example), like inheritance, polymorphism and encapsulation.

The basic idea behind inheritance is that similar objects share common properties. So by creating a "generic" class, we can have a blueprint to build our subsequent classes on. Imagine, if you will, a car's properties: color, number of wheels, horsepower, number of seats, etc. Having this template we can further specialize our cars by extending this class: creating a racing car that has a "nitro" property, or a truck that has a "trailer" property. The bottom line is: create a more generic class that contains most of the common attributes and you will have much less work defining other objects only slightly different. Instead of rewriting the whole code, you just extend it's properties, saving a lot of time in the process. 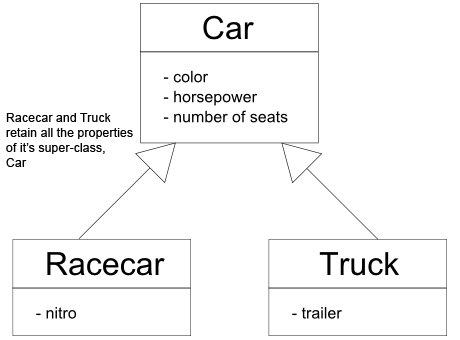 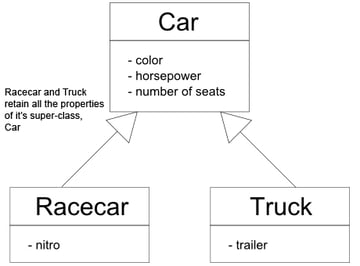 Inheritance diagram for our car classes.

As previously explained, one of the main advantages of using objects is that we don't need to reveal all of its members (attributes or functions); just the necessary interfaces to work with it. Details not useful to the use of these objects should be hidden from the rest of the objects. This is what is referred to as encapsulation.

NOTE: By default, in PHP, a class member is public unless declared private or protected. Check out an example here.

Polymorphism is an OOP characteristic that allows the programmer to assign a different meaning or usage to something in different contexts - specifically, to allow a class member to perform different tasks depending on the context it was used. Imagine you have a Person class and two sub-classes of Person: Japanese and American. Both implement a function named talk(), but with different languages and social context. And while both of them are basically People (as they derive from the class Person), their implementation of the function talk() is very different. So you basically have two objects of the class Person in which the talk() function works differently.

Getting our hands dirty

Ok, now for the real action. We will be creating a simple class to handle image manipulation and information extraction. For the duration of this tutorial I will assume you have a basic understanding of PHP (variables, creating functions, working with control flow statements and loops). Reading the GD PHP manual will remove any doubts you may have about image handling functions.

We start by defining our class:

This just tells PHP we will start defining a new class, named "Image". Now we will define the class constructor. A constructor is simply the function that is called when creating a new object. In PHP 5 this can be achieved by two different methods: creating a public function with the exact same name of the class (PHP 4 and on) or by creating a function called "__construct()" (PHP 5 only):

The following two pieces of code do exactly the same thing:

Class constructors should be used to ensure that the created object has a minimal amount of data to work with; in our case, the desired image.

As such, the first thing we have to do is to read the image, whatever it's type may be. Currently, the GD library supports a number of image types, such as jpg, png, gif, bmp, and others; we just have to read the image and determine it's type.

So we try to open an image file and assign it's file pointer to $fp, and, in case of failure, terminate the program's execution.

Next, we create an empty string to hold our data...

...and read the whole file, concatenating the data read with our newly created string contents.

Now we just have to create our image using the data we just read...

... and create an object to use all these functions.

NOTE: jpg, png, gif and most image files need to be read in binary mode, hence the "rb" passed as the second argument of the fopen function. "r" means read-only and "b" means binary.

In it's current form our class isn't very useful. So we will be adding some attributes and methods to make it more useful. So we will start by 1: defining some internal variables (note the "private" visibility declaration before each variable)

And 2: a method to display the image.

In this step we just created some class attributes (image, width, height and mimetype) to hold the object's data. Then we made some modifications to assign the created image to our class attribute $image...

... and extracted the image's informations to our remaining class variables (read the documentation on getimagesize to fully understand how the image information is read):

Next we created a function that outputs the image to the browser by defining the appropriate headers (read more on http headers here) and using the appropriate function (with the switch statement) to output the image based on the original image mimetype (for this tutorial we will just support jpg, png and gif but, as I said before, GD support a multitude of other formats. Read the php documentation for more). 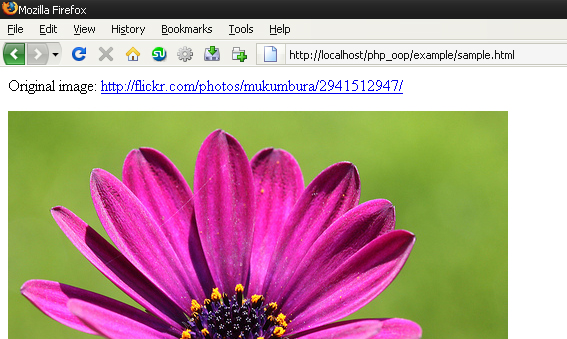 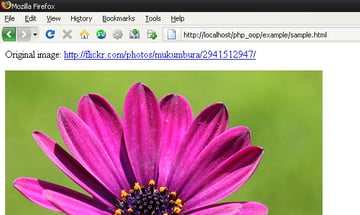 Our not very useful (yet!) display method.

Right now our class isn't very useful. Sure, we can read our image and display it, but that's it. We will now create a sub-class to create our thumbnails. (We really don't need to create a sub-class, but we will for the sake of the tutorial, to demonstrate inheritance and polymorphism). So, for the inheritance to work properly we need to slightly change the definition of our super-class (Image). We just need to change the visibility of our class variables from "private" to "protected". And now we will create the constructor of our subclass.

So what exactly are we doing here? We created a new class, derived from our original, meaning that we can access all of its public and protected attributes and methods. We call the super-class constructor, responsible for reading the image and extracting its information. The sub-class constructor does not call its superclass constructor so we need to call it explicitly.

Now we create a new image for our thumbnail, with the width and height passed:

Resample (resize) the original image into the new one, to create the thumbnail:

And finally modifiy the original image to contain the thumbnail instead of the full-size image:

And guess what? We don't really need to write a new function to display the thumbnail because the same principle applies, whether you are displaying a full size image or a thumbnail. After all, it's still an image! So we just need to call our display() function, defined in the super-class, and we're done! 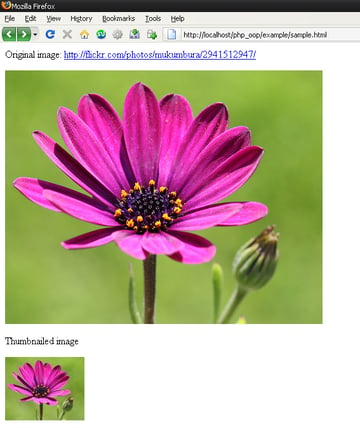 Our completed class and respective sub-class.

And that concludes our tutorial. As an exercise I, suggest you implement a function to save the generated thumbnails to disk instead of outputing it on the fly (Where should you implement that function? In the super or sub-class?). Good luck and check the zip provided for an example usage and the full classes developed here (you need to have a PHP powered server to test it).

PHPWeb DevelopmentOOP
Did you find this post useful?
Yes No
Would you like to provide feedback (optional)?
Cancel Submit
Want a weekly email summary?
Subscribe below and we’ll send you a weekly email summary of all new Code tutorials. Never miss out on learning about the next big thing.
Sign up

João Gradim
I am a student and freelance web designer and web developer in Porto, Portugal
Looking for something to help kick start your next project?
Envato Market has a range of items for sale to help get you started.