UIKit provides developers with UIActivityIndicatorView, which is nothing more than a spinner. However, this simple UIView subclass tells the user that something is in progress -a vital UX consideration. In this tutorial, I will tell you all about UIActivityIndicatorView and, as an added bonus, I will introduce you to MBProgressHUD, an activity indicator class on steroids!

We don't need a complex setup for this quick tip. Fire up Xcode and create a new project using the "Single View Application" template.

Name your application SpinnerDemo, enter a company identifier, set "iPhone" for the device family, and uncheck "Use Storyboards". You can leave the rest untouched. Tell Xcode where you want to save this project and hit "Save". 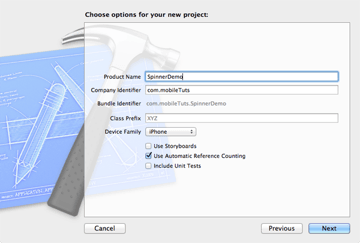 Adding UIActivityIndicatorView to a View

When you build and run your application, you will be surprised that there is no activity indicator to be seen. Why is that? By default, the property hidesWhenStopped is set to YES. This means that the UIActivityIndicatorView will hide itself when it is not animating (spinning). Let's animate our activity indicator by adding one extra line to our implementation file.

Before we move on, I'd like to point something out that is very important and something that many new iOS developers run into. I don't want to go into too much detail and background today, but the gist of it is that you always have to make sure that you do not block the main thread of your application. You might have heard this before and it is especially true for UIActivityIndicatorView. Updating the user interface is done on the main thread and this means that when you block the main thread by performing a long running task on the main thread, it will render your application not only unresponsive to the user, but it will also prevent your activity indicator from showing up or animating. As I said, I will write about this a bit more in a future post.

What can MBProgressHUD do for you?

Let's now take a look at MBProgressHUD. If you have been developing iOS applications for some time, you will definitly see the benefits of this awesome open source class. You can find MBProgressHUD at https://github.com/jdg/MBProgressHUD. Kudos to Matej Bukovinski for developing and maintaining MBProgressHUD.

Adding MBProgressHUD to your Project 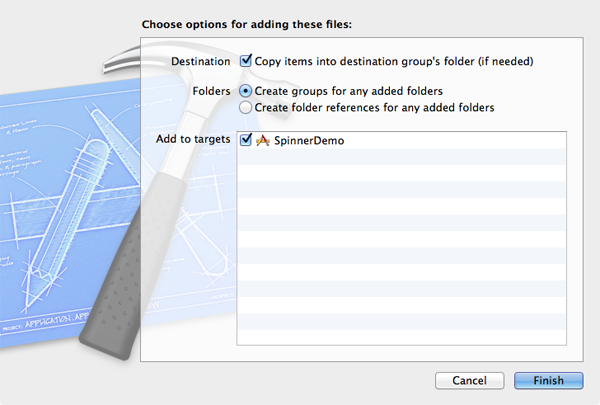 Using MBProgressHUD is almost as simple as UIActivityIndicatorView. It takes a tiny bit more work to set everything up, but you get a lot in return for that effort. First, comment out the four lines of code we added to set up our activity indicator. We won't be needing that anymore. Next, we are going to add a new instance variable (ivar) to the header file of our ViewController class. Don't forget to also add the forward class declaration of MBProgressHUD so your ViewController class knows about MBProgressHUD.

Switch back to ViewController.m and import the header file of MBProgressHUD by adding the following line just below the first import statement.

The initialization of MBProgressHUD differs slightly from the one of UIActivityIndicatorView. Instead of passing a style, you pass a view as the argument of your - init method. This view is the view that MBProgressHUD will block (the user will not be able to interact with this view) when the progress HUD is visible. The second line should be familiar and in the third line we tell the HUD to show itself as it is hidden by default. Ready? Build and run your application in the iOS simulator and have look at the progress HUD that appears.

At first glance, you might think that this is less useful than UIActivityIndicatorView. It is splashed in the middle of the screen and there seems to be no way to position the progress HUD. This is because MBProgressHUD serves a different purpose as I stated earlier. It is meant to show the user that a task is in progress and it also prevents the user from interacting with the view to which the progress HUD is added.

MBProgressHUD has a lot more features than just showing and hiding itself. You can assign a delegate, for example, which gets notified when the progress HUD has hidden itself. In addition, you can customize the progess HUD to a large extent with a progress inidicator, one or two labels telling the user what your application is doing, and it can also be used to display a message. Seriously, MBProgressHUD is very useful and I suggest that you take a look at the demo application that comes with the project you downloaded to get an idea of what it can do for you.

To end this tutorial, I would like to show you one example of how you could use MBProgressHUD in a more advanced scenario. We are going to perform a time consuming task in the background while our progress HUD shows the progess of that task. To be honest, we are not really going to perform a task in the background. We will mimic this with a clever solution that is also used by the demo application included with MBProgressHUD. Edit the setup code of your MBProgressHUD so it looks like the one below.

In the second and third line, we set the text of the primary and secondary label of the progress HUD to give the user some information about what is going on. The fourth line sets the mode of our HUD. MBProgressHUD comes with a number of different modes and the mode we choose, MBProgressHUDModeAnnularDeterminate, will show a circulr progress indicator that shows the progress of our background task. With the last line, we don't simply show the HUD, but we show the HUD and tell it that we are performing a task and it should show itself as long as the task is running. Didn't I tell you that MBProgressHUD is easy to use. Let's now take a look at - doSomeFunkyStuff.

We declare a float named progress and set it to 0.0. Using a while loop, we increment progress and set the progess property of MBProgressHUD to that value. This will result in our HUD's progress indicator to advance. The last line of the while loop is a nifty trick to make sure that this method takes longer than a few milliseconds to run. Using the function usleep, execution of the main thread is suspended for the amount we pass as the argument (in microseconds). Finally, the while loop runs as long as progess is less than 1.0. The HUD will automatically disappear when our method finishes. Build and run your application to see all this in action.

As you can see, both UIActivityIndicatorView and MBProgressHUD have their use cases and both are tremendously useful if you want to build a user friendly application. Don't forget to take a look at the demo appliation of MBProgressHUD to see what it can do for you.