There are probably hundreds of iPhone applications related to photography and film now, yet only a small selection of them have really made it. In this article, we'll be looking at five different iPhone camera applications (including the official iOS 'Camera' app) and examining the pros and cons of their design.

The following applications have all done reasonably well; if not extraordinarily well. This is because of two simple factors: a good final product (the photos or videos look good), and a visually appealing and easy to use user interface. Let's get started, shall we? 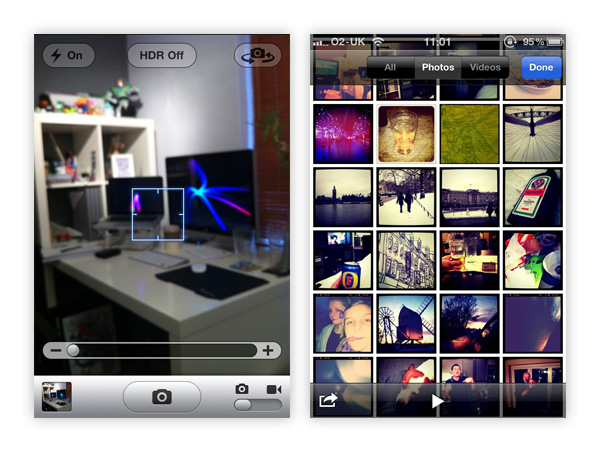 The 'Camera' app is the standard application that comes preinstalled on the iPhone for taking photographs and recording footage.

As this is the standard application for photographs, it was designed by Apple. As you might expect, this means we are provided with a basic but sleek interface. As the design is based purely on the elements from Apple's iPhone UIKit, it is incredibly easy to use, especially as there are only a few functions.

The second screen is the page you will be shown when clicking on your latest photo thumbnail; which is exactly the same as the official "Photos" app (also installed by default on the iPhone). This tiled wall design is simple to use, with additional buttons to allow you to select multiple photos, view them by 'All', 'Photos' or 'Videos', and start a slideshow.

The official Camera app interface is simple and incredibly user-friendly. As an Apple designed application, we should expect nothing less! 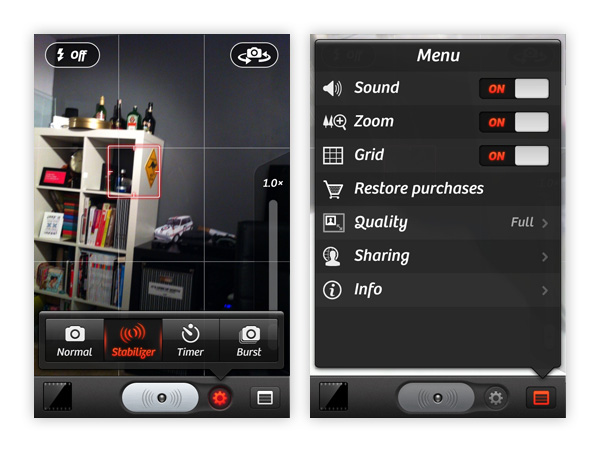 The Camera+ app offers everything the default 'Camera' app offers -and more (hence the '+' in the application's name). The application allows you to turn on a stabilizer (only takes the photo when the iPhone is held still) and also sports timers and bursts. Further, it gives you the option to turn specific features on or off and allows you to edit your photos (brightness, contrast, color overlays, etc) quickly.

In terms of design, the application uses an approach similar to the default 'Camera' application, but with a darker theme. Similar buttons are placed around the same location.

Not only is this a great little application for giving you a few extra settings when snapping away with your iPhone, it is also well designed, taking on many modern effects to create an easy to understand application. 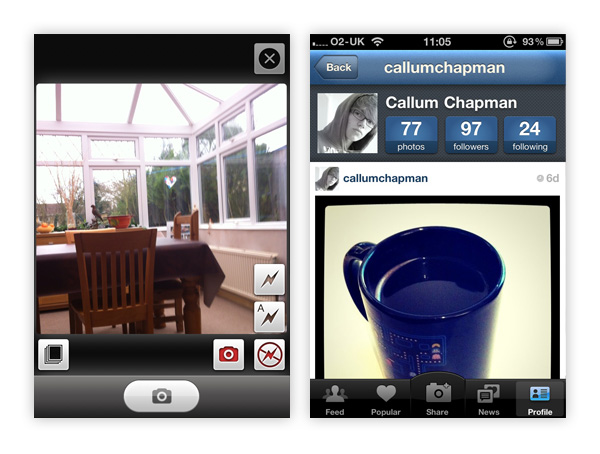 Instagram is a nifty little iPhone application that allows you to take photographs and then apply effects to them from a small list of pre-existing filters. It's a very simple application. While it doesn't have a ton of features, one really sticks out: it will upload your photo and automatically tweet or post to several sites online.

The design of it is again based on the default Apple Camera app, making users who have never used the application before relatively comfortable with it immediately.

Overall, the Instagram design looks great. It combines modern, sleek styles with noise and texture to create a unique look. It's also easy to use. 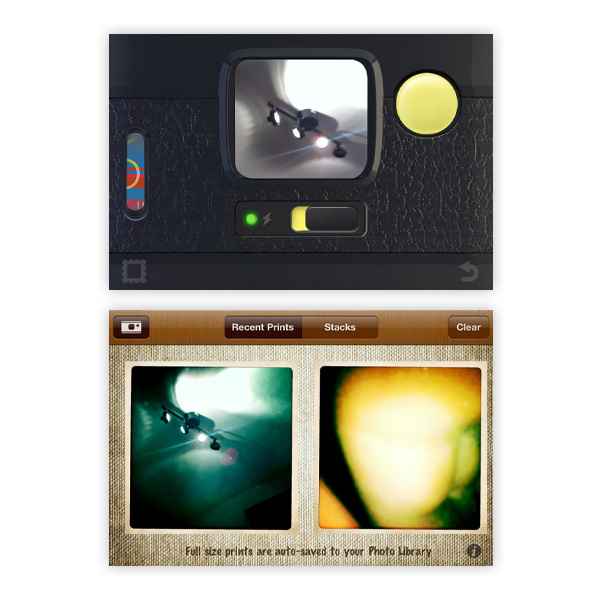 Hipstamatic is a great photography application that allows you to simulate the effects of old lenses, films, and flashes. The application comes with several pre-installed kits, but more can be purchased if these aren't enough for you!

When not using the camera interface, your recent photos (or "prints") can be viewed on a lovely textured interface. The camera store is also well designed!

All in all this application is superb, and well deserves to be one of the top selling iPhone apps of all time. It produces fantastic results, and in general it is a joy to use thanks to its gorgeous interface. 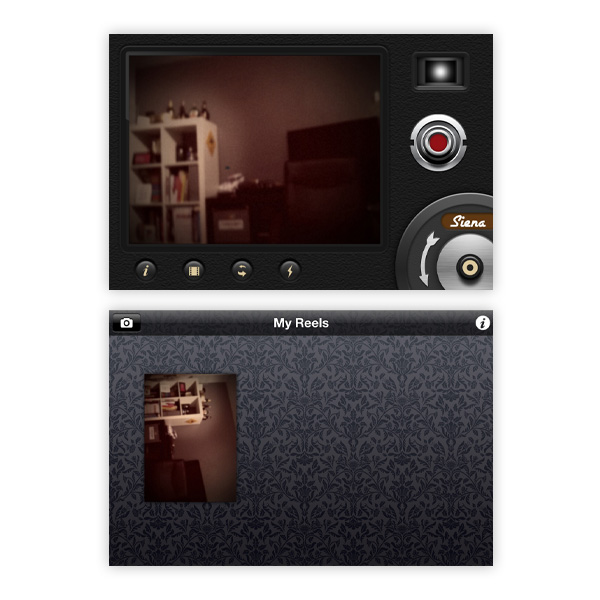 8mm is a little different from the other applications in this showcase as it doesn't actually take still photographs. Instead, it only does video footage. The idea of the application is to produce a vintage effect as if the film was recorded onto a reel using an 8mm camera.

Being an app that films vintage-style footage, the interface is also rather vintage looking. What you see here is what you get: everything that looks like it does something most probably does, including the wheel on the right hand side.

In conclusion, just like the Hipstamatic application, 8mm is an absolute joy to use. Its vintage design is fun to use, and, more importantly, the outcome of the recorded footage is excellent!

Based on what we've just seen, it's clear that an application does a million times better if it is well designed. A good looking application suggests it has been well researched, and if a lot of time and money was spent on the design, the chances are the same has been done with development.

They say you shouldn't judge a book by its cover...but can you judge an application by its user interface? What do you think?

Post your answers and thoughts in the comments section below!

Callum Chapman
Callum Chapman is a self-employed blogger, author, graphic designer and illustrator. He is the founder of Circlebox Blog, and is also the founder & co-owner of DesignGiveaways.com, a design blog dedicated to giving cool products away! Drop him a line at Twitter!
Weekly email summary