How to Create a Photo Gallery Using the Flickr API

Flickr is, without doubt, the biggest and best photography website on the internet. There are lots of widgets, badges and plugins which allow you to display your latest Flickr photos on your website, but we'll take it a step further by tapping straight into Flickr and integrating your photostream into your website, giving you a photo gallery that is a breeze to update.

We'll be creating this photo gallery using the Flickr API and phpFlickr . If the letters 'A,P & I' are enough to strike fear into your heart, don't worry, we will take it slow and give full code examples that you can copy. 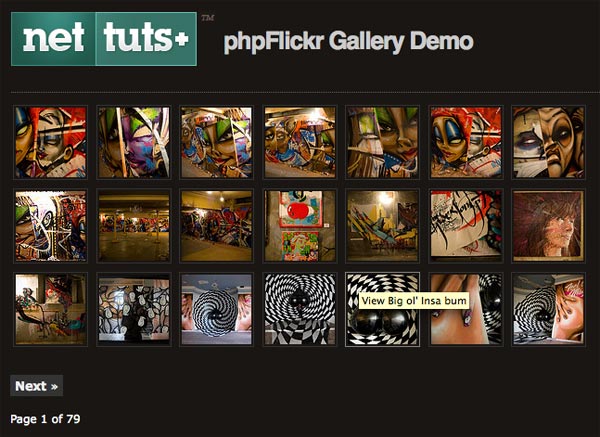 Flickr have also recently launched The App Garden, which is a showcase of tools, toys and sites which use the Flickr API to offer something useful or fun. Once you get to grips with using the API, you can let your imagination conjure up a new way to use it and submit your app.

Your API key is your own unique series of numbers and letters which grant you access to Flickr's services. Go here: http://www.flickr.com/services/apps/create/apply/

Here you must decide if you are going to use Flickr for commercial or non-commercial purposes. Flickr provide good explanations as to which you should choose, chances are you'll need a non-commercial API key, which is what I am choosing for this demo.

Follow the steps and fill in all your details.

You should then be presented with your unique key which will appear as a series of random numbers and letters like so:

You'll also see a number called 'Secret;' ignore that for now. For this exercise we only need the key; make a note of it as we'll need it soon.

If you use the API to build a cool tool or site later on, you might want to submit and feature whatever you build in the Flickr App Garden. You can click on 'Edit app details' to fill in the info.

Pay particular attention to the tips and advice given in the API Terms of Use and the Community Guidelines, if you abuse it, you'll lose it.

Now on to the exciting stuff...

phpFlickr is a project by Dan Coulter. It is a class written in PHP which acts as a wrapper for Flickr's API. The files process the data provided by Flickr and return arrays in PHP, which we use to display our photos

We need to download the files that we will later include in our webpage, and will do all the complicated work for us. Visit phpflickr.com or skip straight to the download page at Google Code. In this demo, we'll be using the zip file: phpFlickr-2.3.1 (zip) 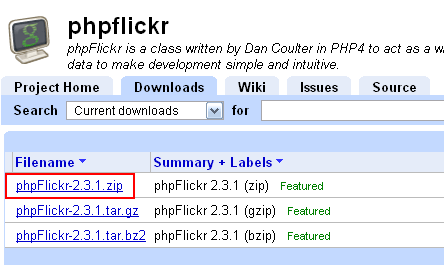 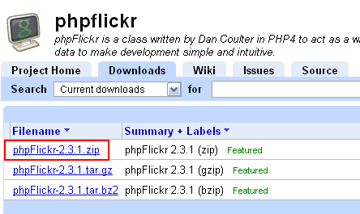 Download and unzip it. For this tutorial, we only need the PEAR folder and the phpFlickr.php file. Upload the files to your web directory

Now we have all we need to connect with Flickr and retrieve our photos. We'll make two pages: one to show our thumbnails and one to show the photo. All of the code will be available as complete pages at the end of the tutorial.

These code examples are all working on the basis that your files are on the root of your server - or all in the same folder. Before anything else, we need to create a cache folder in order for phpFlickr to work properly. Create a folder called 'cache' in your web directory and give it writable permissions (CHMOD 777).

Now we'll build a page that displays our thumbnails and has some simple paging. In the example gallery, this is index.php - and looks like this.

Before we go any further, we need to set two main variables in the config.php file.

First, enter your API key - the long random set of numbers and letters you were given earlier on by Flickr. Keep your info inside the quote marks.

Now for your Flickr username; this is not your Yahoo sign-in username or your Flickr screename - but the username you use for Flickr itself. To double check, sign in to Flickr and look at the top of the page where it says 'Signed in as...' - that is your username. So let's declare our username as a variable:

Save the changes to config.php and upload - you shouldn't need that file again.

On to the page itself. Here's a breakdown of what we are doing at the top of the page, which cues up everything ready for the action:

We are going to include some Previous and Next links with a small bit of code further down the page. The thumbnails we are going to show depend on what page we are on, so we run a simple if statement which will grab our page number. If there's a 'fpage' query in the url, use that. If not, we are on page one.

Next we include the core phpFlickr file that has everything we need in it communicate with Flickr.

Now we fire up a new class from the phpFlickr file using our API key that we got earlier.

phpFlickr uses caching to speed the process up. There are options of using a database technique but for this tutorial we will use the simpler cache folder option. We need a folder called 'cache' that is writable, meaning that the system has access to it and can alter its contents. To do this set the folders' permissions to 777 via your FTP program. Then we add this line to enable it:

We call the people_findByUsername method which returns an array:

Next, we call the people_getPublicPhotos method, which again returns an array that we will call $photos. In this line, we are also passing through our id which we got in the line above ($nsid). NULL refers to the 'extras' option which we're not concerned with right now. We are also stating the number of thumbnails we want to display (21), and are passing through the page to start on ($page) which relates back to the $page variable from the top of the page:

The last bit we need to set the page up is a little bit of info we need for the paging to work. We access the $photos array we created above, and pull out the the total number of pages, plus the total amount of photos in our photostream:

Notice we're closing the php section off here with the ?> Now we have all we need to get the first 21 thumbnails from our Flickr photostream and display them. We'll carry on with the page now, adding some html, using PHP to show the images, and include some simple paging links. So let's start by writing some basic html.

Nothing out of the ordinary here; just setting up the html and starting an area for the thumbnails. The next step is to fill our div called 'thumbs' with our thumbnails like so:

We'll use a foreach loop to run through the $photos array and to get to the photo element ($photo), which holds the info we need for the thumbnails.
See the comments in the code for an explanation of what's going on:

We're almost done with the main page. Chances are, you have more than 21 photos in your Photostream; so we'll need to add some paging with some Previous and Next links so we can move to the next 21 thumbnails. The links look like this:

This code relies on the line we had at the top calling the $page variable. When our code calls in the photos from Flickr, it also uses the $page variable to know where to start - look back at the line where we called 'people_getPublicPhotos' and you'll see that we passed in the $page variable there as well. That value is the backbone of this little paging arrangement. We'll open a paragraph with the id of 'nav', open up the PHP tags, and define our 'back' and 'next' variables:

Next we handle the actual 'Previous' and 'Next' links by checking that we're not on the first or last page, the close off php and close the 'p' tag.

Now we refer back to some values we had at the beginning to display a little more about where we are in the gallery:

And to abide by Flickr's terms and finish the page off, we'll add:

Now that we have our thumbnails, we need a page to show the full image when one is clicked on. Here is the code for photo.php, which the thumbnails link. We start this page similarly to the index page, but instead of the page number, we want the id of the photo which has been passed in the url from our thumbnail page:

Now we need to gather some info from Flickr about the photo such as the photo's id number, its dimensions, where it sits in relation to other photos (context) and the url of the image.

Now we are primed for the rest of the page with the juicy bits.

Now we have our photo... and we are almost done. This last bit may look a bit tricky but don't be put off by it. It has to do with the photo's context, as in, which photo comes next in the stream and which one was previous to it. Just like you see on people's Flickr galleries. The reason there seems a lot of code is because for this to work best, we have to check to see if there is a photo before or after the current photo. If there isn't, we don't want a link, instead we insert normal text and a dummy image (noimg.png).

And to finish the page off, we'll include a link back to the main gallery, a bit of text for Flickr and close off the html.

Hold up! One more thing... we finish the if statement from just before the html began... again, see the notes at the end about why we do this.

And there you have it. A photo gallery for your website, powered by your Flickr account. Take a look at the demo page to review how it looks with a bit of extra markup and styling added. This is a very basic implementation of the Flickr API; it just scratches the surface of what you can do, but it does provides a nice photo gallery for your site/blog which you can easily update and maintain via Flickr.

Have fun, and show us what you come up with!

Paul Burgess
Paul Burgess is a web designer based in Brighton, UK, raised on hip hop, design and a mild internet addiction.
Looking for something to help kick start your next project?
Envato Market has a range of items for sale to help get you started.