How to Build a Kick-Butt CSS3 Mega Dropdown Menu

Often used on e-commerce or large-scale websites, mega menus are becoming more and more popular, as they offer an effective solution to displaying a lot of content while keeping a clean layout. In this tutorial, we'll learn how to build a cross-browser, awesome CSS-only drop-down mega menu, using nice CSS3 features.

Here's what you'll be building: 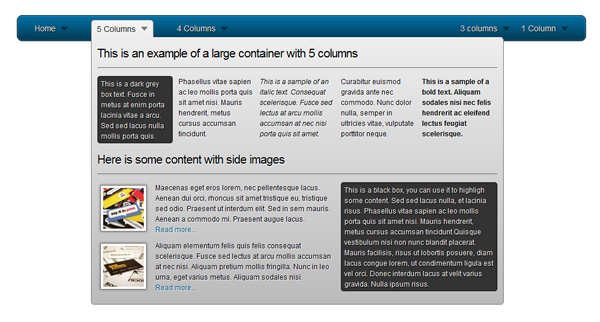 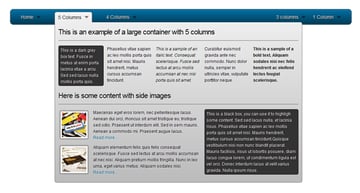 You can jump to a live demo to see it in action.

Let's begin with a basic menu, built with an unordered list and some basic CSS styling. Create a folder for this project, and inside it create these two files: index.html (for the HTML markup) and style.css (for the stylesheet code). Also, create a folder named img in the project root and move some images there to be used on the menu.

Open the index.html file with your favorite text editor and include the following code:

We'll now apply some basic CSS styling. For the menu container, we define a fixed width that we center by setting the left and right margins to auto. Open your style.css file and include the following code:

For rounded corners, add the following syntax in the #menu block:

For the background, we'll use gradients and a fallback color for older browsers. To keep consistency when choosing colors, there is an awesome tool called Facade that helps you find lighter and darker tones of a basic color. Add the following code to the #menu block:

The first line applies a simple background color (for older browsers); the second and third lines create a gradient from the top to the bottom using two colors: #0272a7 and #013953.

We can now add a darker border and polish the design with a "fake" inset border created with the "box-shadow" feature. The syntax is the same for all compatible browsers: the first value is the horizontal offset, the second one is the vertical offset, and the third one is the blur radius (a small value makes it sharper; it will be 1 pixel in our example). We set all offsets to 0 so the blur value will create a uniform light border:

Here's the final CSS code for the #menu container, which should go in the style.css file:

We will begin with all the menu items aligned to the left and space them with a margin-right (the padding will be necessary for the hover state):

For the hover state and the dropdown, I have chosen a grey color scheme for the background.

The fallback color will be a light grey (#F4F4F4), and the gradient will be applied from the top (#F4F4F4) to the bottom (#EEEEEE). Rounded corners will be applied only on the top corners as we'll have the dropdown sticking right under the menu items.

The left and right padding is slightly smaller here because we have a border of 1 pixel appearing on hover. If we keep the same padding, menu items will be pushed two pixels to the right because of the left and right borders added on mouse hover. To avoid that, we'll remove 1 pixel of padding on both sides, so we have 9 pixels instead of 10.

Then, we add rounded corners to the top only so the dropdown will stick perfectly under the parent menu item:

Here is the final CSS for the menu items on hover. Add the code to your style.css file:

For the links, we'll apply a nice text shadow using simple syntax. The first and second values are horizontal and vertical offsets for the shadow (1 pixel in our example), the third one is the blur (1 pixel too), and then we have the (black) color:

Here is the final CSS for the links. Add it to style.css:

On mouse hover, as the background is grey, we'll use a darker color (#161616) for the links and white for the text shadow. Add to style.css:

Finally, we need a way to indicate if there's a dropdown or not by using a simple arrow image as a background. It will be positioned on the right using padding, and the top margin will align to it properly. On hover, this top margin will be set to 7 pixels instead of 8 as we have an additional border appearing on mouse hover (otherwise, the arrow would be pushed 1 pixel down on hover):

Here is our final code for the menu container and links; only the "home" item doesn't have any dropdown content for now:

And the result is:

All dropdowns will go inside the list item <li> elements, just beneath the <a> tags. A "classic" dropdown menu usually contains lists nested within parent list items and looks like:

For our mega menu, instead of nested lists, we'll simply use standard DIVs, which will work like any nested list:

This will be the basic structure for the dropdown. The idea behind it is to be able to include any kind of content, such as paragraphs, images, custom lists, or a contact form, organized into columns.

Containers with different sizes will hold the entire dropdown content. I've chosen the tag names according to the number of columns they will contain.

To hide the dropdowns, we'll use absolute positioning with a negative left margin:

The background fallback color is the same as the one used for the menu items. Modern browsers will display a gradient starting with #EEEEEE at the top (to match the parent menu item gradient) and ending with #BBBBBB at the bottom:

We'll again use rounded corners, except for the top left one:

Here's the complete code. Add it to style.css:

To illustrate this, let's see how it would look if we hadn't paid attention to detail:

Now here is our example:

As you can see, the dropdown sticks nicely to its parent menu item.

In order to have a perfect dropdown container, we need to specify the width for each one. Add the following code in style.css:

Finally, in style.css, to show the dropdowns on mouse hover, we'll simply use:

Our classes are ready to be included in our menu. We'll use each one of them, from the five-column layout to the single-column dropdown. Inside index.html, replace just the ul element and all of its content with this:

Here is a preview of the code above:

Now that we have the containers ready, we'll create columns of increasing sizes, following the principles of the 960 grid system. Include this in style.css:

Here is an example of a dropdown containing several columns. In this example, we have different combinations using all kinds of columns. The following is the code for the second <li> element in the menu:

4. Aligning to the Right

To accomplish this, in style.css, we'll add a new class called .menu_right to the parent list item, so we reset the right margin and float it to the right:

Next, let's see the dropdown. In the previous CSS code, rounded corners were applied to all corners except the top-left one, in order to match the background of the parent menu item. Now we want this dropdown to stick to the right edge of the parent menu item. So we'll overwrite the border-radius values with a new class called .align_right, and set the top-right corner to 0.

Last but not least, we want to make the dropdown appear on the right. So we'll use our new class and reset the left value, and then make it stick to the right:

Now it's ready to be used in the menu:

Here's a small preview of the code above:

Now that we have the whole structure ready, we can add as much content as we want: text, lists, images, etc.

Let's begin with some basic styling for paragraphs and headings:

We can apply a nice blue color to the links within the dropdown:

Let's revamp our lists; we have to reset some styling such as the background color and the borders which are used in the navigation bar:

And to create a paragraph with an image on the left:

To highlight some content, here is an example of a dark box with rounded corners and a subtle inset shadow:

And to finish, here's another way to style your lists using, again, some CSS3:

Here's a live demo of what you'll be building:

I hope you've enjoyed this tutorial on creating mega menus. Thanks for following along!

Also, if you need a quick starting point for building a professional website, then browse through our gallery of CSS templates. They offer a number of ready-to-use professional features.

Web DevelopmentHTMLCSS3Front-EndCross-Browser
Did you find this post useful?
Yes No
Would you like to provide feedback (optional)?
Cancel Submit
Want a weekly email summary?
Subscribe below and we’ll send you a weekly email summary of all new Code tutorials. Never miss out on learning about the next big thing.
Sign up

Guillaume Marty
N/A
Looking for something to help kick start your next project?
Envato Market has a range of items for sale to help get you started.