How to Add Mouse Gesture Control to Your Flash Projects: Single-Stroke Gestures

I recently bought my first Bamboo, a Wacom tablet that recognises letters from shapes drawn with the stylus. It tickled memories of my first experience with gesture-controlled application: using mouse gestures, web browsers such as Maxthon (and later Opera) allowed users to quickly move back and forth through webpages in the history, switch between different tabs, and so on. I was facinated by its neat user interface, as it takes away traditional mouse clicks. Of course, sophisticated gesture-controlled devices such as the Kinect, iPad and iPhone are now available - but it all started with the good old PC. In this tutorial, you'll learn how to develop a photo gallery that recognises singular mouse gestures.

(Note: this doesn't snap to center the photo when panning; it's sensitive to the length of the line that you draw.)

It is important to understand the vector math involved in detecting mouse gestures. Having understood detection of a single direction, one can easily extend the understanding to apply to all eight directions.

Implementing Step 2 will be easy. However, chances are 90% that users' gestures will fail. Diagram below shows commonly commited gestures (middle); they seldom comply with a rigid Vector pointing to due right (left). Thus, it's better to give alleviation for gesture inaccuracies (right).

For example, we can give an alleviation of 30° on both sides of the Vector pointing due right so that angle of any gesture's Vector that falls within that range will be accepted and interpreted as a gesture to due right. 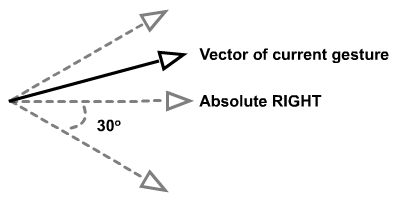 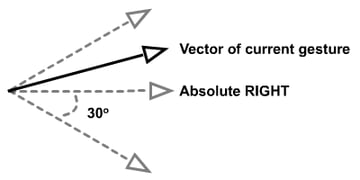 Below is an implementation of gesture detection to due right. Press down on mouse, move mouse to the right, and release mouse within the Flash presentation below. Try to gesture a little off the absolute right to check out the implementation of alleviation.

Lets look at the variables on our hard-coded implementation in Step 4. I've highlighted the important Vector2D variables. Take note of comments I've placed at the end of each variable.

I assume you already know the basics of putting a TextField into your project so I shall focus on the ActionScript implementation of mouse gesture. The implementation as indicated below is heavily commented. Important Vector calculations are highlighted as well. I encourage readers to examine these comments, especially those highlighted, to understand operations at different events at runtime.

(The Vector2D class is the same one I've used in previous tutorials, like this one.)

For clarification purposes, here's a summmary of the hard-coded implementation: 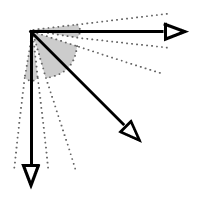 If the user changes his mind after mouse press and mouse releases immediately, a gesture will still be detected if his pointer makes a slightest move to the adjacent pixels. We should allow users to undo gesture detection. In this tutorial, I've enforced a minimum magnitude the Vector of current gesture must exceed to be valid. I've included a diagram as below. 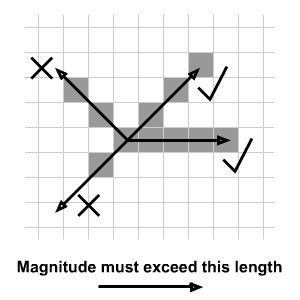 In order to detect singular mouse gestures I have implemented MGesture. Do download and examine this ActionScript file. I shall go through its class variables first, then the class methods.

You may have guessed it already from reference to code implementation of directions. For clarification, here are the main directions' integer representations.

Below are class methods for MGesture.

The essential methods tabled in Step 12 are all documented here. Do read through the comments.

Now that the MGesture class is set, we shall proceed with an demo application (photo gallery) of it. I have included a source file here. Do download and follow along. First of all, get all images into the "lib" folder in your existing project. Images I've used here are courtesy of my wife and daughter. 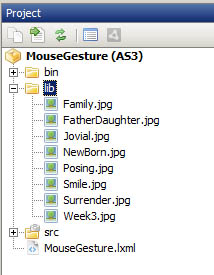 Create a new Actionscript class and name it PhotoView. We shall use these images to construct our gallery. 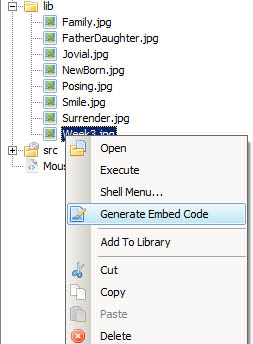 It is important to clarify here the management of PhotoView's display list. I've included a Flash presentation here. To use it, make a gesture to right or left. For further details, refer to Step 2.

In the PhotoView's constructor, we initiate all necessary display objects and position them into place. Plus, we initiate MGesture and attach events listeners to start gesture detection. I've highlighted the event listeners. Their details are explained over the next two steps.

Line 99 highlighted is not related to detection of gesture, but merely to select image for scaling & placing it on top of all other images.

Step 20: Animating the Panel and Images

Once the directions has been detected, animation will begin. Depending on the gesture made, the whole panel may move in four directions or one single image may enlarge or shrink.

Now all is set. You may finally publish your work by pressing Ctrl + Enter on FlashDevelop. Again. here's a piece of the final product.

This is not the end of it. In the next part, we shall look at detection of a gesture sequence, which will be even more interesting than this part (which really just showed the basics). Do drop comments and let me know if MGesture had been useful to you, as well as any bugs, if you encountered any. Finally, terima kasih for the time reading. I'm hoping to entertain my fellow readers in Part 2.