Gulp as a Development Web Server

The task runner Gulp.js is getting more and more popular lately. It can be used for many things, like concatenating JavaScript files or minifying images. If you are new to Gulp.js, I recommend you to start off with Managing Your Build Tasks With Gulp.js.

In this tutorial, you will learn how to use Gulp.js, in order to run a local web server with built-in, livereload support.

Let's assume we want to develop a single page application. The entry point for this app is a simple index.html file. Our goal is to access this file through the browser, by going to localhost. In the past, perhaps you setup an Apache or Nginx server. Well, that's not needed anymore.

Today, an implementation in JavaScript exists for almost everything, even for a web server. The most popular one is called Connect. We will be using it, by utilizing a Gulp.js plugin called gulp-connect.

In the following sections, we will setup a local web server for a single page application, so I'll assume you have already setup the basic files, like the gulpfile.js file.

We start off by installing the Connect plugin with the command below. Everything we need will be installed with this single command.

Tip: npm install --save-dev can be abbreviated with npm i -D.

Now, let's define a task for the web server. Our gulpfile.js should then look like this:

We can now start the web server by simply running gulp in the terminal. We can open up localhost:8080 in our browser, where we should see index.html. The web server mounts the file structure of the folder, where the gulpfile.js lives in, to the root of localhost:8080. The server will run until you stop the task by pressing Ctrl + c on your keyboard. Great!

You can find the source code for this and all following examples on Github. Each example contains all necessary files to reproduce a working setup. You just need to run npm install in the respective directory.

Setting up the basic web server was easy, right? So let's continue to get livereload running. We need to do two things: first tell the web server to start with livereload support and secondly, we tell livereload when to refresh the page with new content.

The first step is simple. Just set the livereload property to true. The webserver task then looks like this:

The second step depends on your use case. In this example, we will setup automatic compilation of LESS files to a CSS stylesheet and inject it into the browser. Let's break down this example into its parts. We need a "watcher", which checks if some LESS files got changed. This watcher should then trigger the LESS compiler, which outputs a CSS file. This CSS file should then be injected via livereload.

For this example, we will use the gulp-less plugin. You can install it by running npm install --save-dev gulp-less. The watcher comes already shipped with Gulp.js. Our app file structure should roughly look like this:

In the watch task, Gulp.js listens for changes in all *.less files in the styles folder and triggers the less task. Here, the main.less file is the entry point for LESS. After each compile step, the result will be automatically injected into the browser. The code for the gulpfile.js looks like the following, feel free to copy and paste it, to your project.

Let's rerun gulp in the terminal and open up again localhost:8080 in the browser. We can now make some changes to a LESS file in the styles folder. It will be instantly compiled and refreshed in the browser. Note that you don't need any browser extensions. livereload works out of the box.

Please keep in mind that the previous gulpfile.js is just a minimal demonstration of how to use Gulp.js as a web server with livereload. I highly recommend playing around with some other plugins. You should also try to rearrange the task structure and use the non-builtin gulp-watch plugin, which allows you to process just the changed files. This becomes important if you're working with a bigger code base. Later in this tutorial, we will see what an alternative task structure might look like.

The gulp-connect plugin itself has many configuration options. For example, you can modify the web server port or hostname. You can even use a custom hostname with port 80 (default is localhost:8080).

To get this working, we need to have gulp.dev in our hosts file and run the command sudo gulp. Administrator rights are needed in order to use port 80.

You can go even further using the connect plugin for spawning multiple web servers at the same time. This becomes useful, for example, if you want to run a development web server and run integration tests, simultaneously.

gulp-connect also provides the possibility to use several directories as a root folder. For example, when you're using CoffeeScript and you want to save the compiled JavaScript files in a temporary folder, you can then mount this folder without polluting your source folder.

In the previous example we setup a minimal gulpfile.js to compile LESS files to CSS and inject them immediately into the browser. It worked, but we can do better. It might be problematic that we mixed the compile and livereload steps into one task. So, let's split them up and watch for changes in the generated files. For that, we will be using the previously mentioned gulp-watch plugin.

Let's go even a step further and add a CoffeeScript compile step. With this additional step, the new structure should be more clear. We install the new plugins in one batch via:

And require them in the top of our gulpfile.js. In the following setup, I assume you already have some .coffee files in a directory called scripts. For an example setup, please checkout this repo. The refactored gulpfile.js could look like the following. We'll go through the changes, step by step.

The biggest change we see is the additional livereload task. This task just watches (via the gulp-watch plugin) for changes in the compiled files and refreshes them in the browser. The custom watch() function allows us to just reload the changed files, whereas the built-in gulp.watch() command would reload all files and not just the changed ones.

Because of this single additional task, we don't need a .pipe(connect.reload()) command after each compile step. So we separated the tasks by their concerns, which is always a good idea in software development.

We also noticed that the compiled files aren't saved in their respective source folder any more. They are now stored in a temporary folder named .tmp. The contents of this folder are just generated files and won't pollute the styles or scripts directories any longer. It's also recommended to exclude this folder from your revision control system. All we have to do to get this working, is to also mount .tmp as a root folder, which is done by

This refactored setup should work just like the one before. But it's way cleaner and easier to extend.

You've just learned how to use Gulp.js as a web server.

You can combine this technique with many other use cases, like testing or building your single page application. Note that this web server is just meant for local development. For production purposes, you should use a more performant solution like Nginx or a CDN.

Notice that all the presented features are also possible with Grunt or similar projects. Gulp.js just provides a very simple and elegant way of doing things. 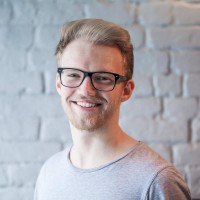