Getting Started with MongoDB - Part 1

Ready to get in and start learning about MongoDB, one of the coolest technologies for web developers?

In this new series, you'll go from beginner to pro and be able to use Mongo just as easily as MySQL in your web apps. But first, let's look at the basics.

What if you could store the programmatic models almost exactly like you model them?

In object-oriented development, we're encouraged to approach code development through logical models, so that we can more readily conceptualise it in our mind. When we do this, we're better able discern the logical operations used to interact with it and information that it would contain at different times.

In this series, we'll be learning everything from the basics of MongoDb, such as creating, updating and deleting databases and records, to being able to perform complex searches for data and elementary data mining with MapReduce. So, without much ado – let's get started!

Note: This tutorial is done from the perspective of NIX based system a la Mac OSX, Linux BSD and so on. But you should be able to follow along if you're running Windows pretty well as there are builds for most platforms.

Ok, so here's where the fun begins. We're going to get started by installing Mongo. Go to the MongoDb website and click on the downloads link.

This will bring you to a page where you can grab a build for your platform and architecture.

This tutorial only covers stable releases, so please do not grab a nightly build. Once it's downloaded, please install it as per the requirements of your platform.

If you're on a Nix machine, then please use its package manager to install the latest version for your platform.

With that out of the way, fire up a terminal and type in mongo. That will open up the Mongo shell and let us get under way. All being well, you'll see output similar to below: 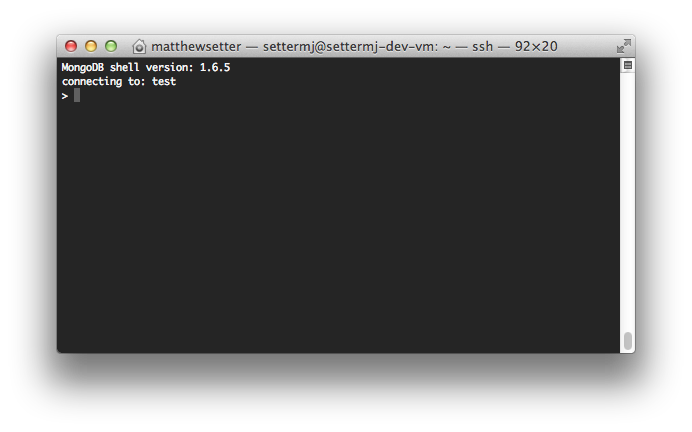 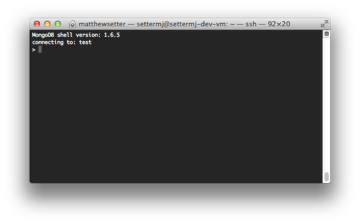 If you see that, then you're ready to go.

Initially, no database is created. But don't worry, they'll instantly be created when we start inserting our records, which we're going to do right now. Copy the content below and paste it in your mongo shell

All good? Excellent! To confirm that the database and accompanying records have been created, type in the following command:

If everything went to plan, then you will see the following output: 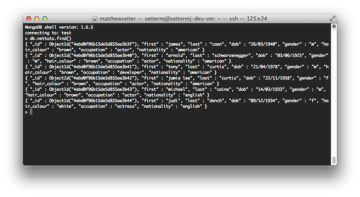 This shows that all of the records were created in the database. One thing to note before we go any further is the id field. This is auto generated by Mongo for you, if you don't specify an id. The reason is that every record must have a unique id field.

You can see that we have one record for each of the ones that we insert – now we're ready to start querying them.

You remember the previous command? It retrieved and displayed every record in the database. Helpful, yes, but how do you be more specific? How do you find all female actors, filtering out the males? That's a good question and the answer is selectors.

Records That MUST Match

Let's start with a basic selector. Say that we want to find all actors that are female
. To accomplish that, you'll need to run the following command:

Here we have specified that gender must be equal 'f'.

Running that command will return the following output: 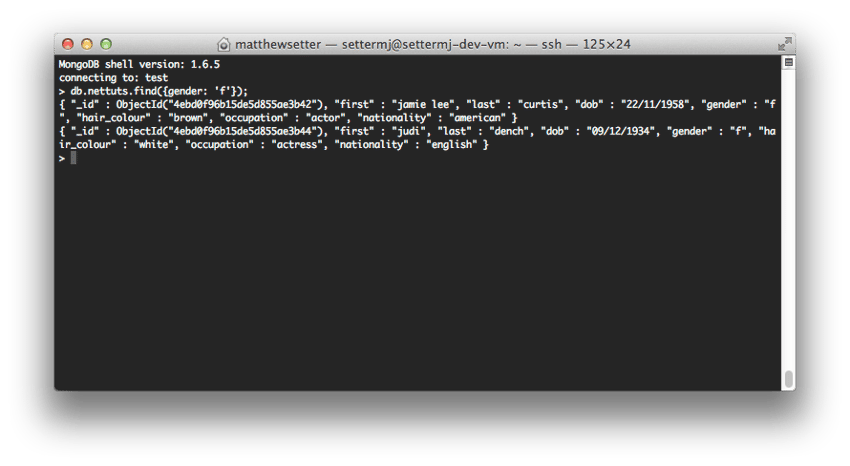 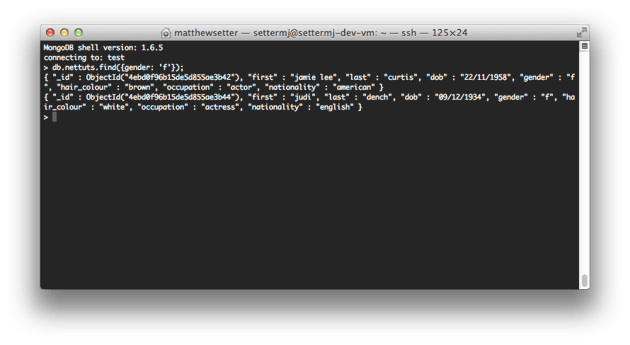 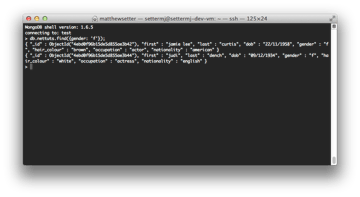 What if we wanted to search for male actors? Run the following command:

We'll get the following results:

Let's step it up a notch. We'll look for male actors that are English.

Running that will return the following results: 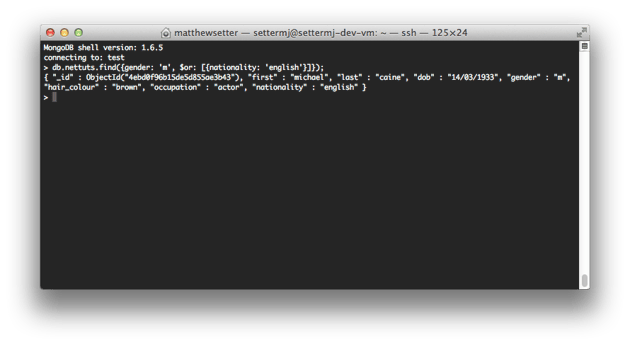 What about male actors who are English or American. Easy! Let's adjust our earlier command to include the Americans:

For that query, we'll see the following results: 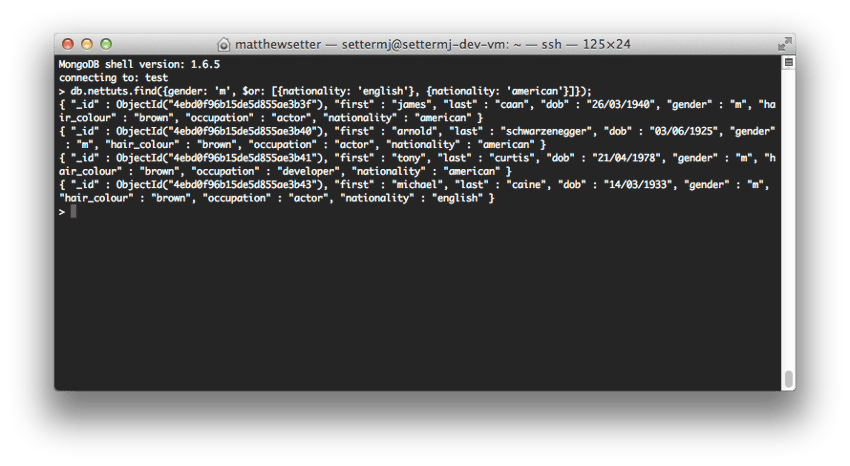 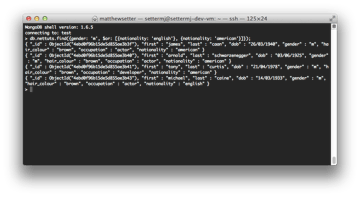 What if we want to sort records, say by first name or nationality? Similar to SQL, Mongo provides the sort command. The command, like the find command takes a list of options to determine the sort order.

Unlike SQL, however we specify ascending and descending differently. We do that as follows:

Let's have a look at an example:

This example retrieves all male, English or American, actors and sorts them in descending order of nationality. 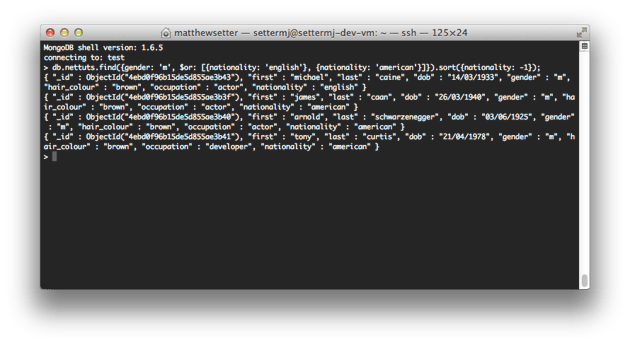 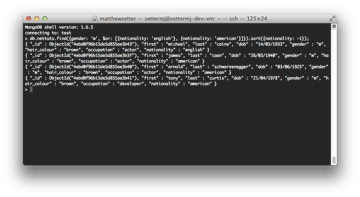 What about sorting by nationality in descending order and name in ascending order? No problem at all! Take a look at the query below, which is a modified version of the last one we ran.

This time we retrieve the following results et: 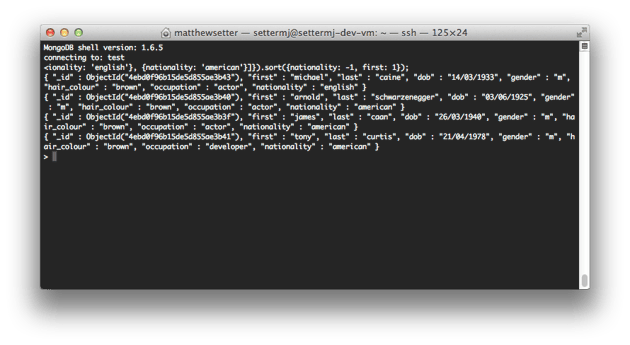 You can see that this time Arnold Schwarzenegger is placed before Tony Curtis.

What if we had a pretty big data set (lucky us, we don't) and we wanted to limit the results to just 2? Mongo provides the limit command, similar to MySQL and allows us to do just that. Let's update our previous query and return just 2 records. Have a look at the following command:

From that command, we'll get the following results: 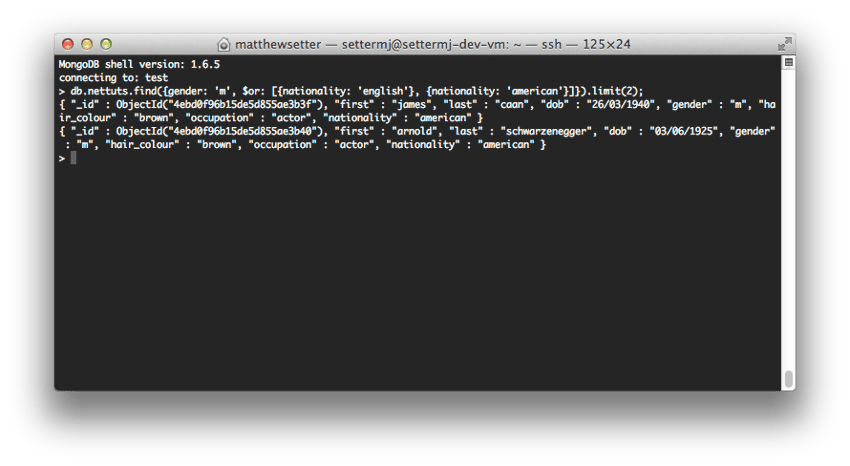 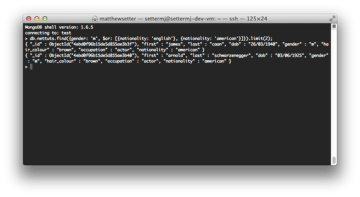 If we wanted the third and fourth records, i.e., skip over the first two? Once again, Mongo has a function for that. Have a look at the further customisation of the previous command:

Running that will return the following results:

You can see from the original result set that the first two were skipped.

As expected, Mongo provides an option to update records as well. As with the find method and SQL queries, you need to specify the criteria for the record that you want to modify, then the data in that record that's going to be modified.

Let's say that we need to update the record for James Caan specifying that his hair is grey, not brown. Well for that we run the update function. Have a look at the example below:

Now when you run that, if all went well, there won't be anything to indicate whether it was a success or failure. To find out if the record was update properly, we need to search for it. So let's do that.

After this you will see the following result: 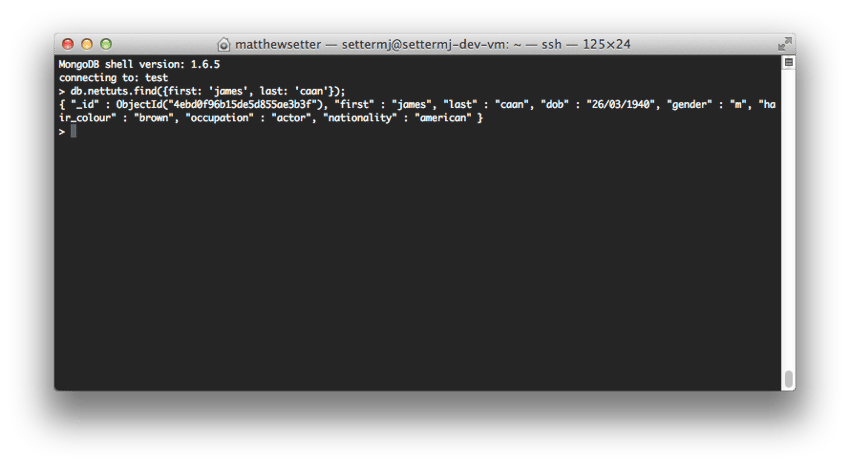 This shows that the update worked. One word of caution though, if you don't pass in the $set modifier, then you will replace the record, if it's available, instead of updating it. Be careful!

I think by this stage, you have really started to get the idea of working with Mongo. That's right, if you want to delete a record, you have to pass in a set of selectors, as you also would with SQL, to determine the set of records to delete. If you don't do this, you will delete all records – and the database.

So, let's say that we don't want James Caan in our list of actors. Let's remove him from the database using the following command:

As with update, no visible output is provided to indicate whether we were successful or not – so let's do a search to double check.

After this, you should see no results returned. If that's what you've found, then we've successfully deleted James Caan from our database. But what if we want to delete all the records from the database?

Well, to do that, just remove the selectors from the previous call to remove, as below.

After running both commands above, we'll see no output, indicating that the database, with all records have now been removed. 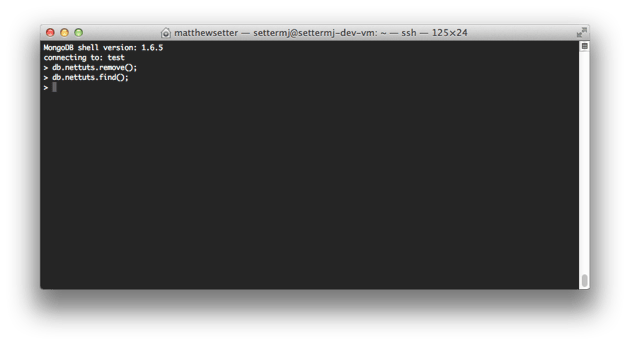 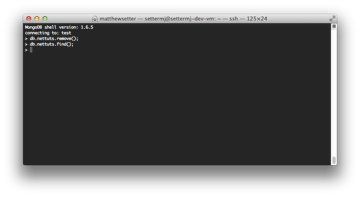 In this rapid introduction to using MongoDB we looked at:

With this knowledge, you can go, practice, and learn more about this wonderful technology. If you want more information, feel free to check out the MongoDb website or follow @mongodb on Twitter.

In the next tutorial, we're going to start to learn more about complex queries. So stay tuned and thank you so much for reading.

Update: The second part of this series has been posted and can be found here.

DatabasesWeb DevelopmentNoSQLMongoDB
Did you find this post useful?
Yes No
Would you like to provide feedback (optional)?
Cancel Submit
Want a weekly email summary?
Subscribe below and we’ll send you a weekly email summary of all new Code tutorials. Never miss out on learning about the next big thing.
Sign up

Matthew Setter
Freelance Developer & Technical Writer
Matthew Setter is a software developer and freelance technical writer with over 14 years of professional software development experience gained in Australia, England and Germany. He is the author of Zend Framework 2 Foundations, writes for a variety of publications including PHP Architect magazine and SitePoint.com, and is regularly developing with PHP and related technologies.
settermjd
Looking for something to help kick start your next project?
Envato Market has a range of items for sale to help get you started.