A good understanding of the iOS SDK is key when developing native iOS applications. Not only will it help you choose the right tools to tackle a particular problem, it will also make sure that you don't get lost in the dozens of frameworks that are included in the iOS SDK. In this article, we zoom in on the iOS architecture and find out what powers iOS applications under the hood.

What is the iOS SDK?

I am pretty sure that even a few experienced iOS developers would have a hard time defining the iOS SDK in one sentence. The acronym SDK stands for Software Development Kit. The iOS SDK contains the tools and resources to develop native iOS applications, which means that the SDK allows developers to develop, install, run, and test applications in the iOS Simulator and on physical devices.

What is a native iOS application?

Apple defines a Cocoa application as an application that's composed of objects that ultimately inherit from NSObject, a root class declared in the Foundation framework, and that's based upon the Objective-C runtime.

The Foundation framework provides a second root class, NSProxy. However, you will rarely, if ever, use it in any of your projects.

The operating system provides native applications with the necessary information about the hardware capabilities (Does the device have a camera?) and device specifications (Is the application running on an iPhone or an iPad?).

The iOS architecture can be broken down into four distinct layers: 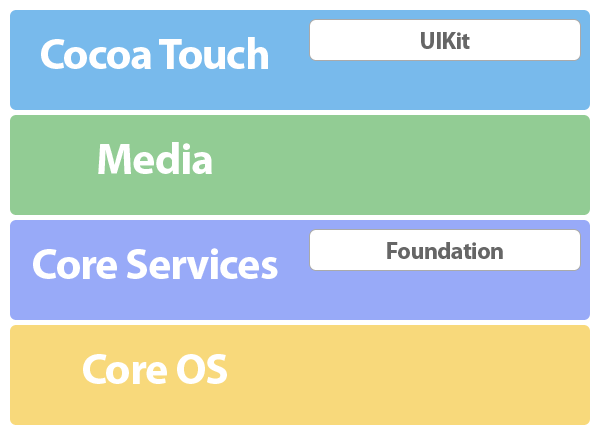 As a reminder, a framework is a directory that contains a dynamic shared library and the resources associated with it, such as header files, images, etc. Frameworks are the access points to various system interfaces, such as the iOS address book, the device's camera roll, and the music library.

In the previous article, I wrote about Cocoa Touch and its relation to Objective-C. In this article, I would like to discuss Cocoa Touch from a more functional standpoint, how applications rely on the Cocoa Touch layer and what its role is in the iOS architecture.

The Cocoa Touch layer is the topmost layer of the iOS architecture. It contains some of the key frameworks which native iOS applications rely upon, with the most prominent being the UIKit framework.

The Cocoa Touch layer defines the basic application infrastructure and provides a number of vital technologies, such as multitasking and touch-based input.

The Cocoa Touch layer provides developers with a large number of high level features, such as auto layout, printing, gesture recognizers, and document support. In addition to UIKit, it contains the Map Kit, Event Kit, and Message UI frameworks, among others.

For a complete list of all the frameworks of the Cocoa Touch layer, I'd like to refer to Apple's iOS Technology Overview guide.

Graphics, audio, and video are handled by the Media layer. This layer contains a number of key technologies, such as Core Graphics, OpenGL ES and OpenAL, AV Foundation, and Core Media.

The Media layer contains a large number of frameworks including the Assets Library framework to access a device's photos and videos, the Core Image framework for image manipulation through filters, and the Core Graphics framework for 2D drawing.

Take a look at Apple's iOS Technology Overview guide for a complete list of all the frameworks of the Media layer.

One of the most welcomed additions to the Core Services layer is ARC or Automatic Reference Counting. ARC is a compiler-level feature, introduced in 2011 with the release of iOS 5. ARC simplifies the process of memory management in Objective-C.

You can read more about memory management in The Objective-C Programming Language guide and I strongly recommend that you do.

Foundation provides the NSObject root class, which provides a basic interface to the Objective-C runtime, and it also introduces several paradigms, such as policies for object ownership. Like Core Foundation (see below), Foundation makes it possible for the different libraries and frameworks to easily share data and code.

Core Foundation has a feature referred to as toll-free bridging, which enables the substitution of Cocoa objects for Core Foundation objects in function parameters and vice versa.

For a complete list of all the frameworks of the Core Services layer, I'd like to refer to the iOS Technology Overview guide.

Most of the functionality provided by the three higher level layers is built upon the Core OS layer and its low level features. The Core OS layer provides a handful of frameworks that your application can use directly, such as the Accelerate and the Security frameworks.

The Core OS layer also encapsulates the kernel environment and low level UNIX interfaces to which your application has no access for obvious security reasons. However, through the libSystem library, which is C-based, many low level features can be accessed directly, such as BSD sockets, POSIX threads, and DNS services.

Your closest ally when developing native iOS applications is the documentation included with the iOS SDK. For the most part, the documentation is outstanding and it will help you get up to speed with a new technology or framework with little effort.

While writing code in Xcode's code editor, it can quickly become cumbersome to switch back and forth between the code editor and the documentation browser every time you need to look up a class or method.

There are two solutions for efficiently browsing the documentation. Whenever you place your cursor on a class or method name in Xcode's code editor, the Quick Help Inspector in the right sidebar shows a summary of the respective class or method. The summary contains several useful links that take you to the documentation browser.

You should now have a good understanding of the iOS SDK and the various layers of the iOS architecture. The two core frameworks of an iOS application, UIKit and Foundation, are the focus of the next two installments of this series.

Not only are these frameworks indispensable for every iOS application, they contain dozens of classes that you will find yourself using often when developing native iOS applications.