Everything You Need to Get Started With CodeIgniter

CodeIgniter is a web application framework for PHP. It enables developers to build web applications faster, and it offers many helpful code libraries and helpers which speed up tedious tasks in PHP. CodeIgniter is based on a modular design; meaning that you can implement specific libraries at your discretion - which adds to the speed of the framework. This tutorial will attempt to show you the basics of setting up the framework, including how to build a basic hello world application that uses the MVC approach.

Frameworks allow for structure in developing applications by providing reusable classes and functions which can reduce development time significantly. Some downsides to frameworks are that they provide unwanted classes, adding code bloat which makes the app harder to navigate.

CodeIgniter is a very light, well performing framework. While, it is perfect for a beginner (because
of the small learning curve), it's also perfect for large and demanding web applications. CodeIgniter is developed by EllisLab and has thorough, easy to understand
documentation. Below is a list of reasons of what makes CodeIgniter a smart framework to use?

For starters, MVC stands for Model, View, Controller. It is a programing pattern used in developing
web apps. This pattern isolates the user interface and backend (i.e. database interaction from each other. A successful
implementation of this lets developers modify their user interface or backend with out affecting
the other. MVC also increases the flexibly of an app by being able to resuse models or views over
again). Below is a description of MVC.

An example of a MVC approach would be for a contact form.

This may sound like alot of work to do. But, trust me; when you're working with a large application, being able to reuse models or views saves a great deal of time.

Too start off you will need to download CodeIgniter and upload it to your server. Point your browser
to http://www.codeigniter.com/ and
click the large download button. For this tutorial we are using version 1.70.

Once you have downloaded CodeIgniter, all you need to do is unzip it, and rename the "CodeIgniter_1.7.0" folder to
either the application name or, in this case, "ci" and upload it to your PHP and MySQL enabled server.
Now that its on your server, I'll explain what all the folders and files are for:

Getting CI up and running is rather simple. Most of it requires you to edit a few configuration
files.

You need to setup CI to point to the right base URL of the app. To do this, open up system/application/config/config.php and
edit the base_url array item to point to your server and CI folder.

We'll do a quick test to see if CI is up and running properly. Go to http://localhost/ci/ and you
should see the following. 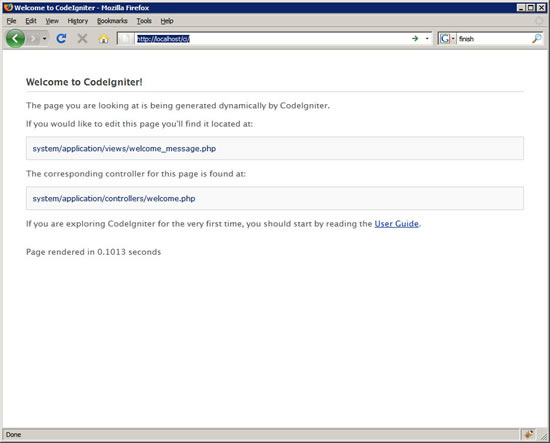 If you're up and running, we should finish the configuration. We are starting to configure it specifically for our new helloworld app. If you want to use a database with your application, (which in this tutorial we do.) open up system/application/config/database.php and set the following array items to there corresponding values. This code connects to a MySQL
database called "helloworld" on a localhost with the username "root", and the password, "root".

Additionally, since we will be using the database quite a bit, we want it to auto load so that we don't
have to specifically load it each time we connect. Open the system/application/config/autoload.php file
and add 'database' to the autoload libaries array.

CI also has a view file that we do not need. Open up the system/application/view/ folder
and delete the welcome_message.php file.

As this isn't really a tutorial on MySQL, I'll keep this section as short as possible. Create a database called "helloworld" and
run the following SQL through phpMyAdmin (or similar MySQL client).

Models are optional in CI, but it's considered best practice to use them. They are just PHP classes that contain
functions which work with information from the database. Go
ahead and make a helloworld_model.php file
in the system/application/models folder.
In this file, create a Helloworld_model class, Helloworld_model construct and a function called getData.

In the getData function we are
going to use Active Record database functions which speed up database development times when working
with CI and databases. Essentially, they are simplified functions to create queries.

Let's create a controller that will display the view, and load the model. That way, when
you go to the address http://localhost/ci/index.php/helloworld/, you will see the data from the database.
In the folder system/application/controllers, create a file called helloworld.php.
In this new file, we'll create a class which has the same name as the file.

The key thing to remember is how CI structures its URLs; e.g http://host/codeignitordirectory/index.php/class/function.

In the controller index function, we need to load the model, query the database, and pass this queried
data to the view. To load any resources into CI e.g. libraries,
helpers, views, or, models, we use the load class. After we have loaded the model, we can access it through
its model name and the particular function. To pass data to a view we need to assign it to an array
item and pass the array - which recreates the array items as a variable in the view file.

If we visited http://localhost/ci/index.php/helloworld/ now, it wouldn't work; this is because the view file does not exist.

The view file is what the user sees and interacts with, it could be a segment of a page, or the whole page. You can pass an array of variables to the view through the second argument
of the load model function. To make the view for our tutorial, create a new file called helloworld_view.php in the system/application/view folder. Next, we just need to create our normal html, head
and body elements, and then a header and paragraph for the information from the database. To display all
the records received from the database, we put it in a "foreach" loop
which loops through all the elements.

You may have noticed that we are using php alternative syntax, this provides an convenient and time
saving way to write echo statements.

Step 10: Ta-da and Some Extras

When you visit "http://localhost/ci/index.php/helloworld/", you
should see something similar to this. 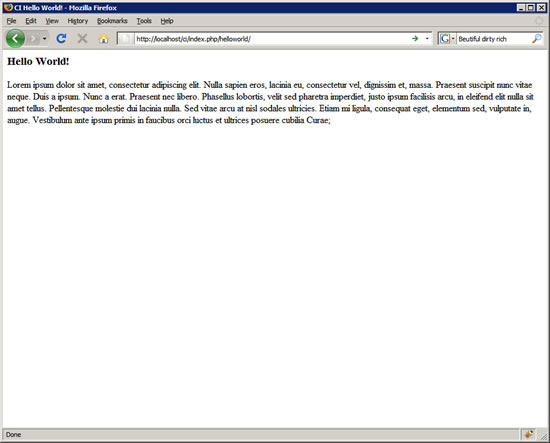 But we aren't done yet. There are a few things you can do to improve your CodeIgniter experience -
like removing that annoying index.php bit out of the URL. You can accomplish this task by creating a .htaccess file in the root folder, and adding the following code.

You'll also need to open up the config.php file in system/application/config/ and edit the index_page array item to a blank string.

Another nifty trick is to turn on CI's ability to parse PHP alternative syntax if its
not enabled by the server. To do this, open up the same file as before, system/application/config/config.php, and set the rewrite_short_tags array item to TRUE.

I hope all goes well! Look forward to seeing more CodeIgniter tutorials from me in the future.

PHPWeb DevelopmentCodeIgniter
Did you find this post useful?
Yes No
Would you like to provide feedback (optional)?
Cancel Submit
Want a weekly email summary?
Subscribe below and we’ll send you a weekly email summary of all new Code tutorials. Never miss out on learning about the next big thing.
Sign up

Ben Haines
Hi, I'm Ben. I'm a developer/designer from a lil' country at the bottom of the world called New Zealand. My poisons of choice are PHP and CodeIgniter, JS and Mootools, CSS, and (X)HTML
Looking for something to help kick start your next project?
Envato Market has a range of items for sale to help get you started.