Magical Record, created by Saul Mora, is an open-source library that makes working with Core Data easier and more elegant. The library was inspired by the active record pattern that is also found in Ruby on Rails. This tutorial will teach you how to use Magical Record in your own apps!

So, why Magical Record? If you've been developing for iOS or OS X for some time, chances are that you have had a taste of Core Data. This means that you know that it can be a bit cumbersome to set up a Core Data stack and, to be honest, working with Core Data can be a bit complex mainly due to its verbose syntax. For example, fetching data from a persistent store is quite verbose especially when compared with how a Ruby on Rails application handles this task.

Even though Magical Record does make working with Core Data easier, it is key that you have a good understanding of Core Data if you decide to use it in a project. Despite its name, Magical Record doesn't perform any magic behind the scenes that makes Core Data work differently. In other words, if you run into problems at some point, it is crucial that you understand how Core Data works internally so you can fix any problems that might pop up along the way.

Since the introduction of Magical Record, the requirements have been increased to iOS 5.0 (or higher) or OS X 10.7 (or higher). It is also worth mentioning that Magical Record supports ARC out of the box.

Since you have read this far, I assume that you are familiar with iOS development and have a basic understanding of Core Data. In this article, I will mainly focus on the Core Data aspect of the application, which means that I will not discuss every code snippet in detail.

Start by creating a new project based on the Single View Application template (figure 1) and name it Magical Notes (figure 2). Set the device family to iPhone and enable ARC by checking the check box labeled Use Automatic Reference Counting. We won't be using Storyboards or Unit Tests in this tutorial. 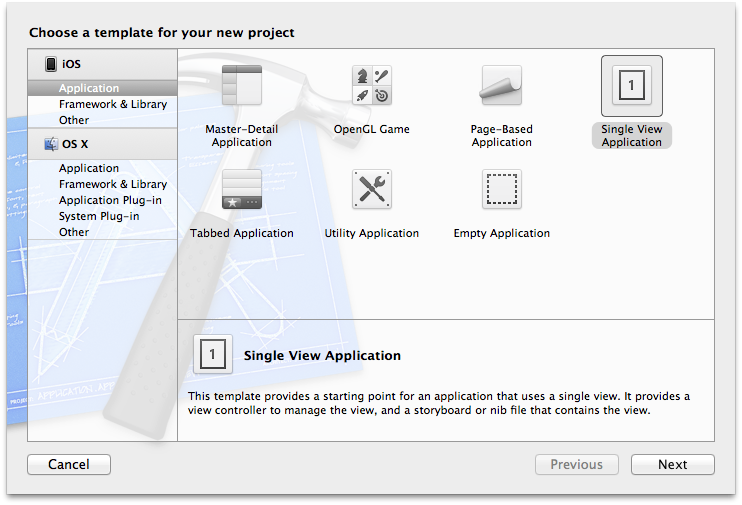 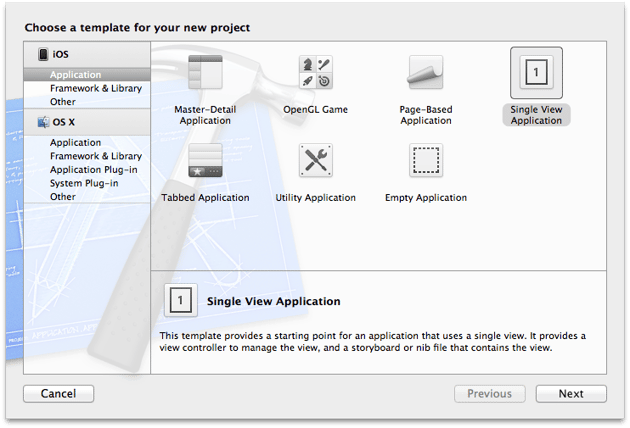 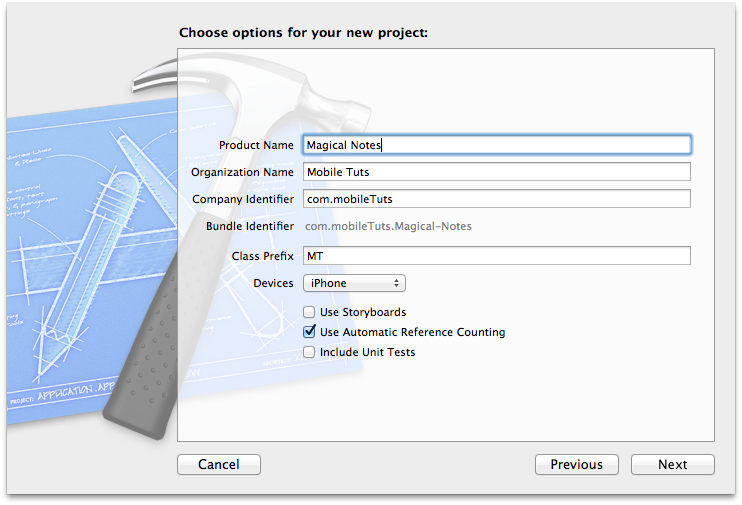 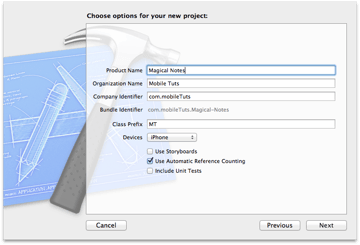 Since we will be using Core Data in this project, don't forget to link your project against the Core Data framework. Since this is a more advanced tutorial, I assume that you already know how to do this. 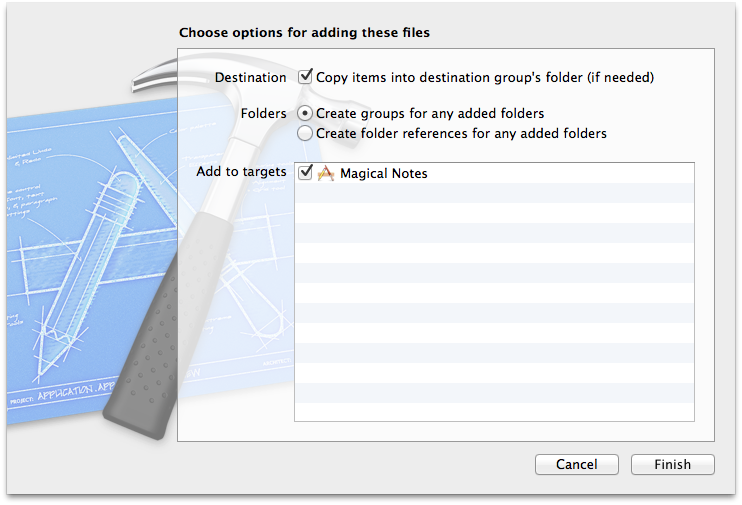 To make use of Magical Record in your classes, we need to import one header file, CoreData+MagicalRecord.h. However, since we will be using Magical Record quite a bit in this tutorial it is much more convenient to move this import statement to your project's Prefix.pch file instead. This will make sure that Magical Record is available in every class of your project.

By default, all Magical Record methods are prefixed with MR_. You can omit the MR_ prefix by adding one extra line to your project's Prefix.pch file, #define MR_SHORTHAND. It is important that you add this line before importing the Magical Record header file.

Start by creating a new Core Data model and name it MagicalNotes (figure 4). Create the Note entity and add the four attributes as outlined above (figure 5). 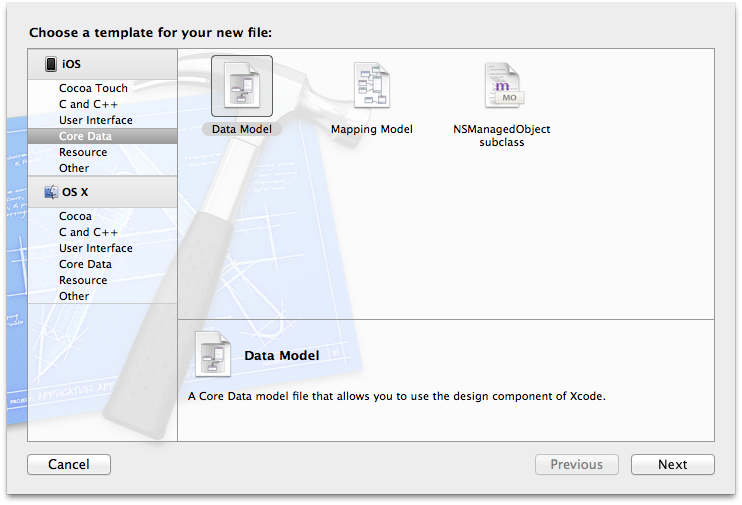 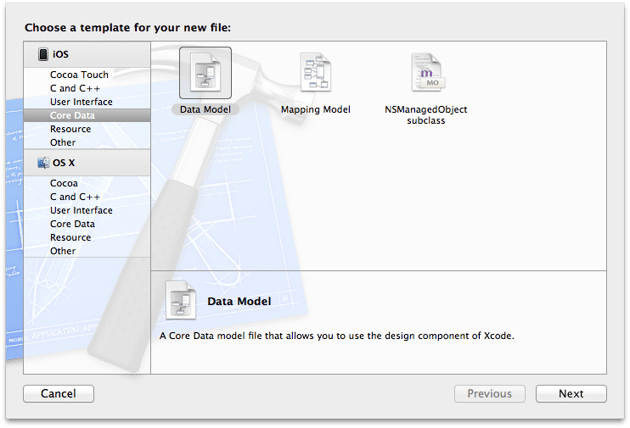 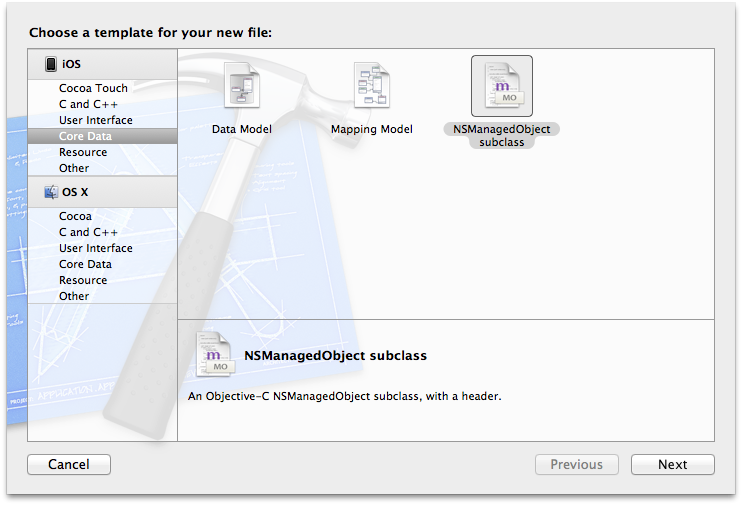 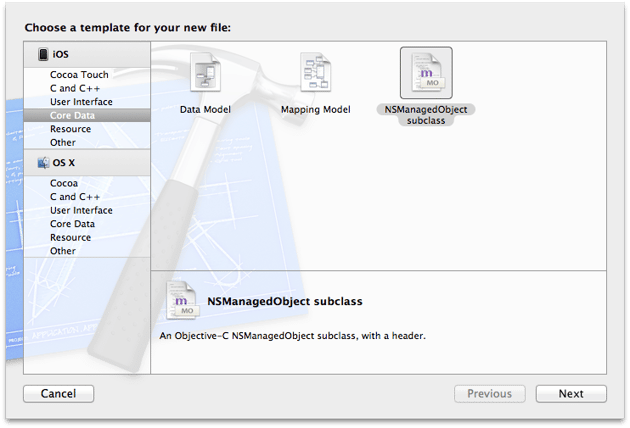 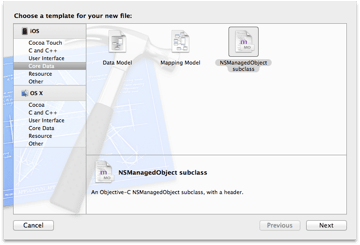 Setting up a Core Data stack is quite a bit of work if you don't use one of the provided Xcode templates. With Magical Record, however, this is not the case. Head over to the application:didFinishLaunchingWithOptions: method of your application delegate and add the following code snippet.

Logging: The ability to log Core Data messages and errors to the console is built into Magical Record. Take a look at the console after building and running your application for the first time. The logs in the console show you exactly what Magical Record is doing behind the scenes.

In the main view controller's implementation file, add a private property named notes to the class extension at the top. Make sure the property is of type NSMutableArray. The notes property will store the notes that we fetch from the data store and will serve as the table view's data source.

It might surprise you that the fetchNotes method is only one line of code. This is all thanks to Magical Record. Fetching the notes from the data store is as simple as calling findAll on the Note class. The method returns an array of records as you'd expect. Don't forget the import the header file of the Note class at the top of the main view controller's implementation file.

Sorting records is easy and elegant. Forget sort descriptors and take a look at the updated implementation of the fetchNotes method below.

The editNotes: method is straightforward. All we do is toggle the editing style of the table view. That should be sufficient for now.

The addNote: method remains blank for the time being.

Before building and running your application, we need to implement the required methods of the table view data source protocol. If you are familiar with iOS development, this shouldn't be too difficult. Take a look at the implementations of the various methods below for clarification.

Build and run your application.

When the user taps the add button, a modal view should appear allowing the user to add a new note to the data store. Create a new UIViewController subclass and name it MTEditNoteViewController. As the name indicates, we will also use this view controller to edit notes. 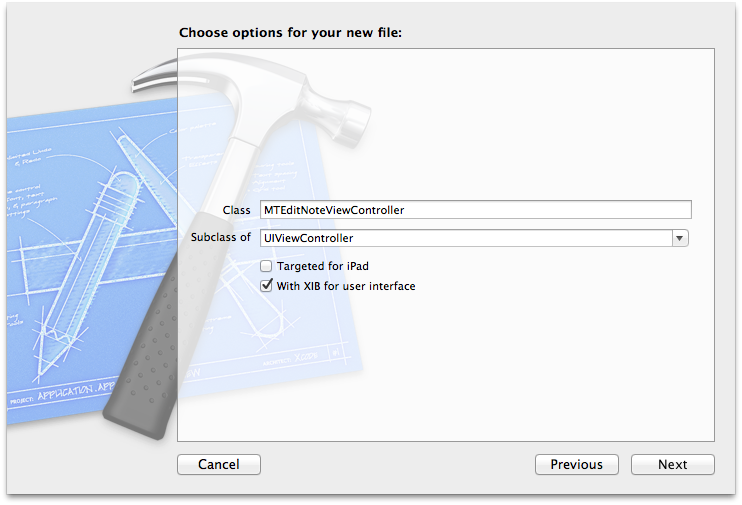 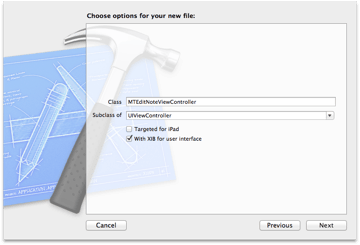 Creating the user interface of the edit note view controller shouldn't be too much of a challenge. Add two UITextField instances and one UITextView instance to the view controller's view. Configure the text fields as you wish, for example, by giving them a placeholder text. Don't forget to connect the File's Owner's outlets with the text fields and the text view. 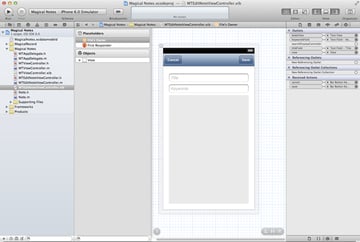 Since we will be using the MTEditNoteViewController class for both adding and editing notes, it is important that we know what state (adding or editing) the view controller is in at any time. There are several ways to solve this problem. One way is to add a private note property to the view controller, which is nil if a new note is created and which is set during initialization when a note is being edited. In situations like this, I prefer to work with specialized initializers to avoid confusion and this is also what allows me to keep the note property private. In addition to the private note property, we also add a second private property named isEditing, a boolean. The reason for this will become clear in a few minutes. Also, don't forget to import the header file of the Note class.

Let's go through the various methods step by step. First, we want to make sure that we can add new notes to the data store without problems. We start with the initWithNibName:bundle: method. The only change we make is setting the isEditing property to NO.

It is now time to amend the addNote: method in the main view controller. Don't forget to import the header file of the MTEditNoteViewController class.

Whenever a new note is added to the data store, we should update the table view to display the changes. For a production application, a better approach would be to observe changes in the managed object context. However, in this sample application, we fetch the notes from the data store and reload the table view every time the main view (re)appears. This is expensive and therefore not recommended if you plan to submit your application to the App Store. For situations like this, a fetched results controller is a perfect solution.

Updating notes is almost as easy as adding notes. As I mentioned earlier, we will create a specialized initializer to set the view controller's note property. Update the header file of the MTEditNoteViewController class by adding the new initializer as shown below. Don't forget to also add a forward class declaration for the Note class to the header file.

The specialized initializer isn't special actually. All we do is set the view controller's note and isEditing properties as you can see below.

Before we build and run the application one more time, we need to update the main view controller's tableView:didSelectRowAtIndexPath: method. In this method, we fetch the correct note, initialize an instance of the MTEditNoteViewController class, and push the view controller onto the navigation stack.

To delete note, we need to amend the tableView:commitEditingStyle:forRowAtIndexPath: method. We fetch the note, delete it from the data source and the managed object context, and update the table view. As you can see, deleting a record or entity from the data store is as simple as sending it a message of deleteEntity.

Using Magical Record, however, this only requires one line of code.

If we were to add the ability to search the list of notes, one approach - although not ideal - would be to search the data store for all the notes with a title or keyword that contained the query. Using Magical Record this would result in the following implementation.

As I said, Magical Record has a lot more to offer than what I have showed you in this tutorial. Since version 2.0, Magical Record can deal with nested contexts and it also provides support for iCloud and threaded operations. The main goal of this tutorial is to show you that Core Data doesn't have to be cumbersome and Saul Mora illustrates this with Magical Record.