In this tutorial I am going to show you, firstly, how to feed a web cam signal into Flash and, secondly, how to get in touch with your inner spy and use your web cam to detect intruders.

There is a caveat: This tutorial will play locally or in a web page. It will not cover how to broadcast the content you see to others on he web. To actually broadcast your feed- you and Aunt Phoebe waving to each other across oceans- you need to use a Flash Media Server 3.5 and that, my friends, is way out of the scope of this piece.

Create a New Document. When the document opens rename layer 1 to "Camera" and add a new layer named "actions". Lock the actions layer.

Click the Library tab and select New Video ... from the Library options pop down. When the Video Properties dialog box opens be sure that Video (Actionscript - controlled) is selected and click OK. You will see a small video camera appear in your Library. This is the Video Object. 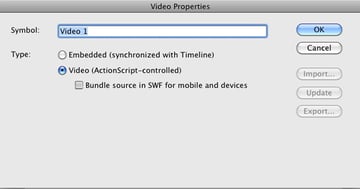 Step 3: Drag the Video Object to the Stage

With the Video Object selected, click the properties tab and change the Width and Height properties to 320 and 240. Give the selected object the Instance name of vidObj. 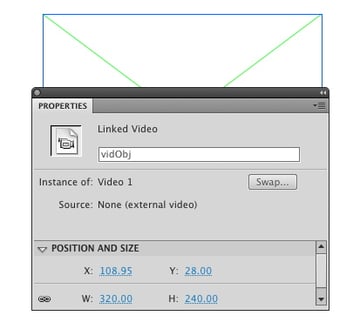 Click once on the first frame of the actions layer and open the Script editor by selecting Window>Actions or pressing the F9 (PC) or Option-F9 (Mac) keys.

If you have never done this before, let’s step through the code.

The first line gives your web cam a variable name and, using the Camera class, tells Flash to hunt down the camera attached to your computer. I only have the iSight camera in my MacBook Pro working away which is why there is no value in the getCamera() method’s parameter. If I were to have a two cameras, let’s say a Logitech web cam, connected to the computer and I wanted to use it instead of the iSight I would enter getCamera("1"). Note that cameras are strings not names. They are added in index order rather than alphanumeric order.

The second line simply attaches the video feed from the web cam to the video object on the stage. It is also important that you know when the attachCamera() method is used at runtime, the user will be prompted, by the Flash Player, to allow the use of the camera.

There you go, only two lines of Actionscript and you're now a movie star. 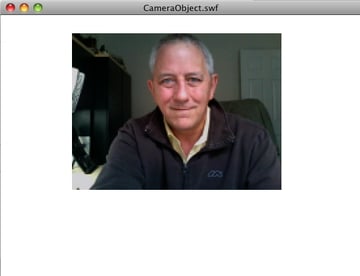 If you aren’t seeing anything the odds are practically 100 % that you have multiple cameras attached to your computer and Flash has picked the wrong one. Here’s how to fix that:

Click on the camera icon in the Flash Player settings. You will be presented with a list of cameras attached to your computer. Select the camera and click the Close button.

In this example, borrowed from my book Foundation Flash Video CS3 by friendsofEd, we are, as I said earlier, "going to get in touch with our inner spy". Though web cams are commonly used for "broadcast" purposes there is a method in the Camera class - setMotionLevel - that can be used to to turn on the camera when it "detects" a certain degree of motion and to then shoot and display an image from that capture. This is sort of how those infamous "Nanny Cams" work.

As an extra bonus, we won’t be using a Video Object, we are going to let ActionScript handle the lifting on that one. Here’s how:

Open a new Flash document and set the stage dimension to 665 pixels wide and 450 pixels high.

Select the first frame of the movie and open the Actions panel.

To start this project we will need a means of displaying the images captured by the web cam at the bottom of the stage. These two classes - Bitmap and BitmapData - make this possible.

Press the Return/Enter key twice and add the following code:

Having called in the Bitmap and BitmapData classes, you now put them to work.

This "housekeeping" code block creates the four Bitmap and BitmapData objects used to display the captured images at the bottom of the stage.The block starts by creating a list that will be used to store the images and their background colors.

That process is the task of the for loop in the third line. In plain English it simply sets the number of images that can be displayed under the camera feed to 4.

The next line creates the boxes that hold those 4 images and makes sure they are 320x240 pixels in size, that they are not transparent - false - and that each box is filled with a dark gray color.

The remaining six lines place the captured images over the gray backgrounds and scale each one to fit. The last line - addChild(myBitmaps[i]); - is how the images will get stuck on the stage.

Press the Return/Enter key twice and add the following line of ActionScript:

If there is a lot of movement the camera will be taking a lot of images that will need to be displayed. This counter ensures that only four images will be visible at any one time.

This code block gets the web camera working. It starts with identifying which camera is is used through the getCamera() method. The next line of code is where the "magic" in this exercise happens.

The Camera class contains a setMotionLevel method that requires only two parameters. The first parameter is how much motion needs to be detected (Flash calls this an "Activity" event) before the camera fires up. The values here can be anything between 0 and 100. Think of this number as being a highly sensitive motion detector. The higher the value added the more motion must be detected to shoot the image. If someone is stealing apples from your apple tree a value of 0 would work because there really isn’t a lot going on. If you live on a residential street and the neighbors are tearing up and down the street in their sports cars, a level of 80 or 90 would be enough to capture an image you can show to the police.

The second parameter, though optional, specifies how many milliseconds of nothing happening must elapse before Flash gets bored and tells the camera to stand down. The default value is 2000 milliseconds (2 seconds). In this example we have dialed up the sensitivity by using a value of 50 milliseconds.

The final four lines create a "virtual" video object named myVideo and plugs the camera into it. That object is placed 172 pixels along the x axis and is flush with the top of the stage. The last line puts the object, called a Sprite, on the stage. For those of you new to "Sprites", think of them as movieclips without a timeline.

This code block black tells Flash what to do when the alarm goes off and motion is detected. In this case the Flash Player has detected an ActivityEvent based upon the setMotionLevel parameters. Having detected that event it fires the motionHandler function.

The motionHandler function tells Flash to do a frame grab and stick it at the bottom of the stage. The if statement makes sure that only 4 images are displayed at any one time.

Save and test the movie. 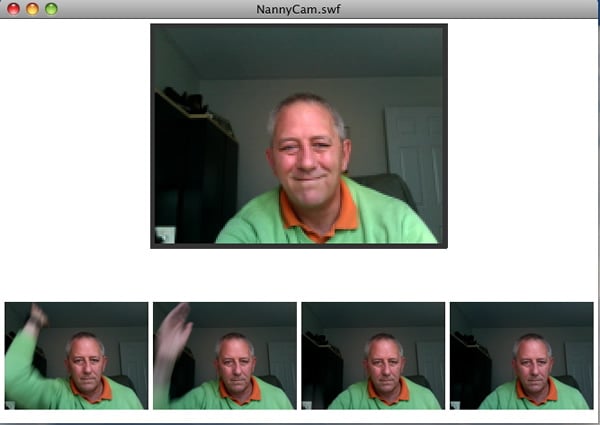 In this tutorial you have discovered that the world of Flash Video isn't limited to stuff you shoot with a recorder or to youTube. It also allows you to use a web cam.

The first example showed you how only two lines of code are required to "get in the game".

The second example used a web cam to create a "Nanny Cam" based on the motion detected by the web cam. Once that motion is detected the movement is captured and an image from that capture is created and displayed at the bottom of the stage. The other interesting aspect of this example was the fact that the entire project was driven by ActionScript. There was nothing in the library and the Flash files consisted of nothing more than a few lines of basic code.

I hope you enjoyed following along!

Tom Green
Tom is a professor of Interactive Multimedia through the Humber Institute of Technology and Advanced Learning’s School of Media Studies. Like all faculty in the program, Tom believes his students deserve to be taught by instructors who are regarded as experts in their field and whose knowledge of their subject is current with industry best practice.
Scroll to top
Looking for something to help kick start your next project?
Envato Market has a range of items for sale to help get you started.