If you dream of creating the next big thing in Android apps, then I'm not going to lie: you’ve got your work cut out for you!

You only need to take a quick peek at the Google Play store to see that pretty much every app you can think of has already been created—usually, multiple times and with varying degrees of success.

In such a competitive market, your app has to offer the full package—simply having a great set of features isn’t going to cut it! Your app also has to be responsive, easy to use, completely free of bugs, and (as shallow as it may seem) it has to look nice, too.

So when you jolt awake in the middle of the night with a brilliant idea for an Android app, resist the temptation to leap out of bed, boot up Android Studio and start bringing your vision to life. If you’re going to do your idea justice, then you need to put some thought into your application’s design.

In this two-part series, I’m going to show you how to turn a great idea into a great app. You’ll learn how to plan, test and perfect every part of your app’s design, and how to iron out as many issues as possible before you even write a single line of code.

In this first installment, we’re going to look at how to answer all of those big, burning questions every developer has to tackle whenever they start a new Android project. Then, we’ll create a list of all the screens we need to build, plus a screen map that shows exactly how all these screens fit together.

In part 2, you’ll master some powerful, designed-minded techniques, including wireframing and prototyping. By the end of part 2 you’ll have created a digital prototype that you can install and test on your Android smartphone, tablet, or emulator.

To help you see exactly how you’d take an idea from ‘spark of inspiration’ to working digital prototype, I’m going to imagine I’ve come up with an idea for an Android app that I want to create, and then develop this idea throughout the series.

Since we're (supposedly) heading into summer, I’m going to design an app that’ll help people plan and book the ultimate summer holiday with all their friends.

So we have our idea—what’s the first thing we need to do?

Your typical app has lots of nice-to-have added extras, but it also has a clearly defined primary task. For example, our finished travel app might include social media functionality so users can share a snap of that awesome cocktail they had on the beach, or the cat they petted outside their hotel, but these features aren’t the app’s primary task.

After much deliberation, I’ve decided on the following product statement:

An app that takes the stress out of planning and booking the ultimate summer vacation.

It’s crucial that you never lose sight of this product statement, so you may want to scribble it on a post-it note and stick it above your desk. 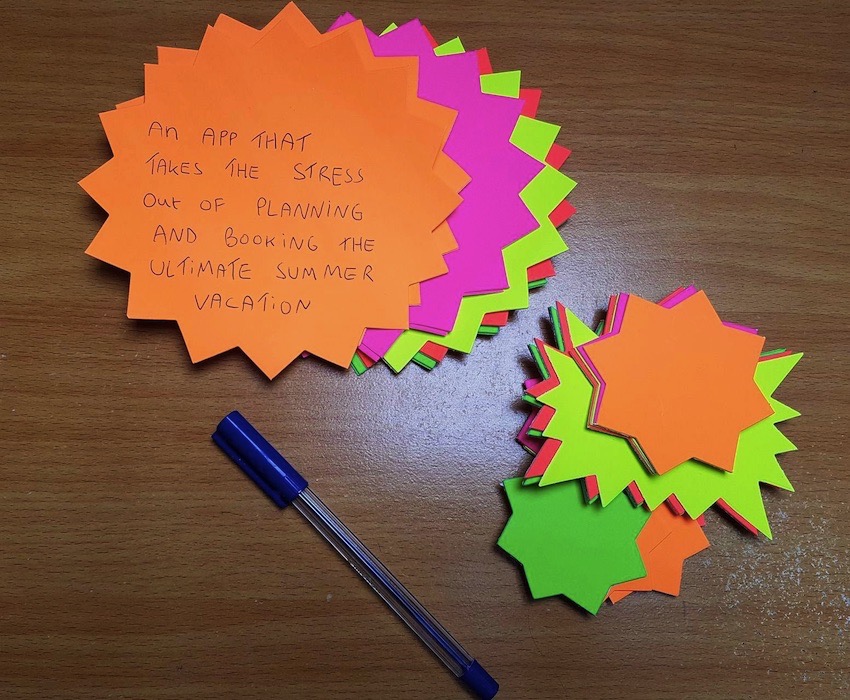 The next big question you need to tackle is: who exactly am I building this thing for?

Hopefully you already have a rough idea of the kind of person who might want to use your app, but for the best results you need to design your app with a very specific target audience in mind. The old saying is true: try to please everyone, and you’ll end up pleasing no one.

Who you’re trying to appeal to should influence every part of your app—from the features you include to the look and feel of your UI, right through to the tone of your application’s text. That’s why it’s crucial you identify your target audience as early in the design process as possible.

I already have a rough idea of who I’m targeting: young adults aged 18-25 who are either on summer break from college or university, taking a full-blown gap year, or are planning one final adventure before it’s time to start looking for that first full-time job. This is a good start, but we can get more specific than that!

One simple but effective trick for zeroing in on your audience is to create a user persona.

Let’s create a user persona for our travel app. For the best results, it helps to think of your persona as a real person. You might even want to give your user persona a name, which is exactly what I'm going to do: meet Sasha!

Since my app is all about organising a holiday, I also need to define Sasha’s experiences surrounding travel. Is my “typical” user likely to be well-travelled? Have they been responsible for planning their own holidays before, or is this all new to them?

I’m going to add the following characteristics to my user persona:

So now we have the who, but what about the when? Under what circumstances might Sasha feel compelled to whip out her phone and boot up our app?

Here are a few that spring to my mind:

It’s time to have some fun: let your imagination run wild and write down every feature you would include in your app if you had infinite time, money and a whole army of developers ready and raring to help you out. For now, don’t worry about whether these features are practical—think of this as your ultimate features list.

If you're struggling for inspiration, then head over to the Google Play store and download a few examples of Android applications that cover similar content, or have the same target audience as your application.

Spend some time exploring these apps and make a note of what the app does well, and any areas you feel you could improve upon.

Here are a few of the features I’ve jotted down:

Now it’s time for a reality check: there’s no way anyone can cram all their ideas into a single app. Even if all your ideas are sensible, well thought out and would appeal to your target audience, throwing everything but the kitchen sink into an app would be a nightmare for you as a developer, and would likely lead to a terrible user experience.

Imagine launching an app for the first time and instantly being confronted by a huge, complicated menu packed with a tonne of options. Choice is a good thing, but too much choice just becomes confusing! Since the last thing you want to do is confuse your users, we need to whittle our ultimate features list down to the bare essentials.

For the initial release, you should concentrate on features that are essential for delivering your app’s core functionality. And remember that just because a feature doesn’t make it into Version 1.0, doesn’t mean it won’t find its way into a subsequent update. If you come across a feature in your list that has potential, but isn’t essential for fulfilling your app’s primary task, then make a note of it as something that’s worth revisiting once you’ve got your app’s fundamentals down.

Your user persona and use cases should also play a role in determining what features you include in Version 1.0 (and in subsequent releases). What features are most likely to appeal to Sasha?

After re-reading the user persona, use cases and product statement, I’ve settled on the following features:

Our list contains other features that would appeal to Sasha, such as being able to post photos from her trip, as we already know that Sasha is a fan of all things social media. However, for this initial release I’m going to keep things simple and remain focused on the app’s primary goal. Once you’ve delivered your app’s core functionality and fulfilled your product statement, you can turn your attention to all those nice-to-have added extras.

4. Sketch Out the High-Level Flow

You next task is to start thinking about the screens that you’ll need to create, in order to deliver this list of features, so grab a piece of paper and a pen or pencil. Sketch some rough flowcharts of the routes your users might take through your app, in order to accomplish core tasks.

For my travel app, the core tasks are: 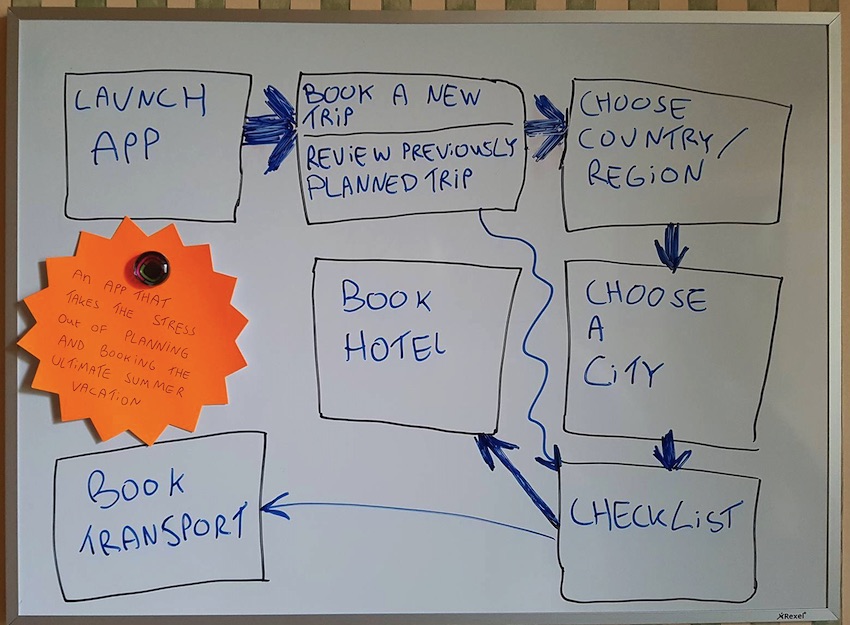 This exercise is mainly intended to get you thinking about the different screens you’ll need to create, in order to deliver the features you cherry-picked from your ultimate features list. Don’t spend too much time on your flowchart, as you’ll refine this flow when you come to create your screen map.

Next, come up with a list of all the screens you’ll need to create, based on your flowchart.

Here’s my screen list, plus a brief overview of what I plan to include in each screen:

Now it’s time to combine our flowchart and screen list into a screen map that expresses the navigational relationship between all of these screens.

Start with the first screen the user sees when they launch your app, and work outwards.

It’s never too early to start looking for ways to improve the user experience, so once you’ve created your screen map, take a moment to look at it with a critical eye. One factor that has a huge impact on the user experience is the number of screens the user needs to navigate in order to complete the app’s core tasks.

Generally speaking, the fewer steps, the better the user experience. This map is the perfect opportunity to identify places where you can reduce the number of screens the user needs to navigate. This may involve removing screens, combining screens, reordering screens, or identifying places where it would make sense to add a navigational ‘shortcut’ so the user can jump straight from screen A to screen E.

So far, we've made some big decisions about the app we’re going to create, including who our target audience is, and what features we’re going to include in Version 1.0 (with some features left over for subsequent releases). We’ve also made a list of all the screens we need to design, and sketched out how these screens are going to be arranged in our finished app.

At this point we have our app all planned out, albeit at a very high level. In part 2 I’m going to dig deeper and design the individual screens that make up this screen map, before putting these screens to the test by building a digital prototype.

Advertisement
Advertisement
Jessica Thornsby
Jessica Thornsby is a technical writer based in Sheffield. She writes about Android, Eclipse, Java, and all things open source. She is the co-author of iWork: The Missing Manual, and the author of Android UI Design.
JessicaThornsby
Weekly email summary