Flash CS4 came with some big changes and features that still amaze us even after the more recent release of Flash CS5. Flash now has the ability to work with objects in 3D space directly within the working environment.

Although it's still a basic feature compared to what you can do with 3D in ActionScript classes, this tool opens the door to designers and animators who don't know much about code. It allows them to start moving their objects in 3D space without the need to use old methods (such as importing 3D animation in sequence images etc.)

The Motion Editor panel not only enhances animation by giving more options through curves control, it also provides control over animation easing, lending a more realistic look. The easing concept is known in many animation applications such as After Effects, but it was previously so basic in Flash and limited to changing the easing value from 100 to -100. The newer easing features give you more ability to control animation easing as we will see in the steps below.

In this tutorial, we'll merge the 3D and easing features by creating 3D animation in Flash and also applying the easing curves.

The first part in our tutorial is to build the cartoon scene for a room with a door.

Open a new Flash document with the dimensions 600px X 450px and start drawing the outline of the room demonstrated in the figure below. 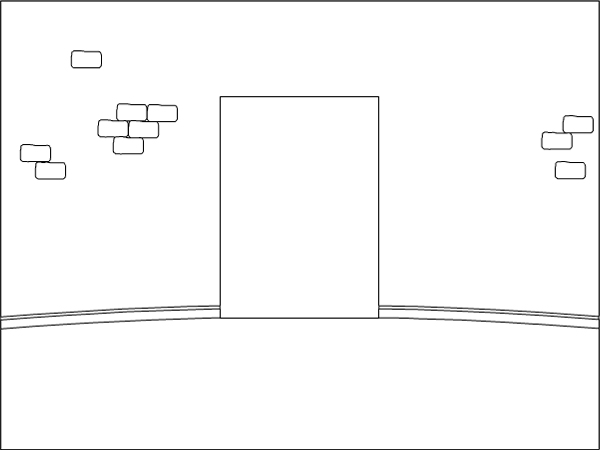 Note that the 3D tool is only available when you have the document publish settings for ActionScript 3 and Flash Player 10 or later. Additionally, it can be applied only on movie clip symbols. You should make sure that your File Publish Settings (found in File > Publish Settings, surprisingly) are set to Action Script 3 and Flash Player 10 or higher.

Cut the door area and place it on a new layer to be able to control it using the 3D tools.

Now, let's add some details to the background to give it a real cartoon look. We'll also add some shadows and textures to the floor and door. 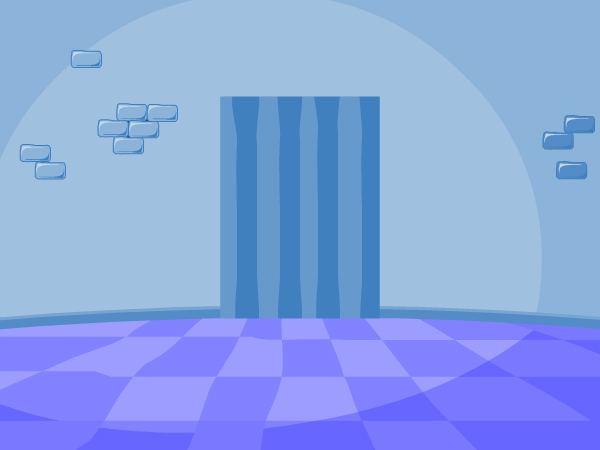 Convert the door symbol to a movie clip and give it the name ‘Door’.

The 3D navigation asset includes four cycles, dragging over each cycle allows you to rotate the symbol in one of the directions as following:

While the door symbol is selected, choose the 3D tool. The 3D asset cycles appear in the middle of the movie clip symbol. 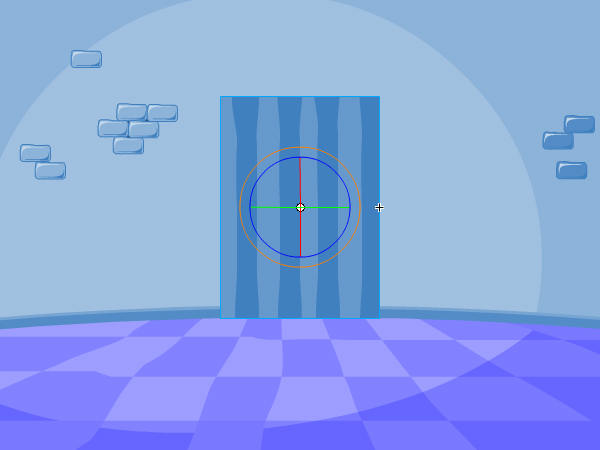 Click on the center point of the 3D cycles and drag the navigation asset to the middle right of the door to make it the center point where the door rotates around. The final look for the background should be as below.

In the above steps, we prepared the cartoon background for the 3D animation through motion tweening. In this animation, we will animate the door to open and close using the 3D tool. Drag the timeline indicator to the first frame in the Timeline panel to start the animation.

Click on the 3D Rotate tool and click on the door symbol. Notice that the 3D navigation asset appears on the right side of the object.

Click over the green cycle and drag to open the door in the direction outside the room as shown in the figure below. 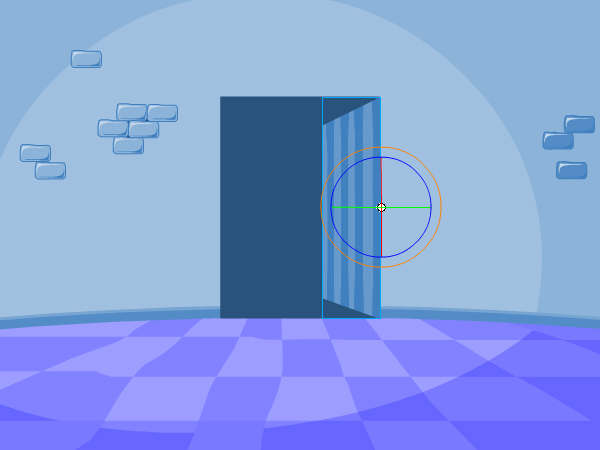 Move the timeline indicator to frame 50. And use the 3D Rotate tool to rotate the door to the other side of the room as shown in the figure below.

We've now created the 3D animation for the door on the Flash stage. Next, we will use the motion editor to create more realistic animation effects using the Easing curves in the Motion Editor panel. Whilst this enhanced easing feature was added to Flash CS4 and newer releases, the older versions of Flash had a simplified easing feature through the Easing value in the properties panel. You can still find this value when you click anywhere in motion tweening, but this method never gave many options other than easing in and out.

The easing curves in the Motion panel are similar to the rest of the motion editor animation curves as they gives you more ability to control the animations' realistic motion.

Before we proceed, here's a brief overview of the easing curves in the Motion panel.

The Motion Editor panel gives you the option to create many easing curves and assign different curves to each motion property and apply different easings to each feature. In the following steps, we will start by applying an easing preset to the door opening animation.

Select the movie clip or click anywhere on the motion tweening, go to the Motion Editor panel and navigate to the Ease section.

Click the plus icon in the Ease section to add ease from the drop-down easing presets. Choose the Spring easing. 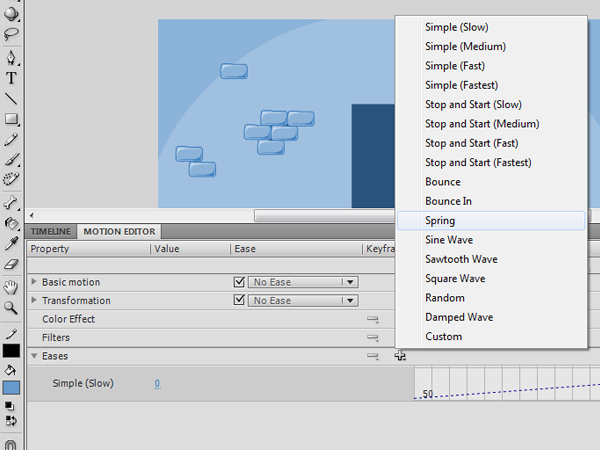 Go to the Rotation Y curve that displays the animation of the door. In the Easing drop-down list, choose Spring. Press Ctrl+Enter to test the animation.

In the following steps, we will create a custom easing curve and apply it to the door opening animation. We'll have a closer look at how the curve works and get to grips with how to work with it.

First, let us remove the previous easing either by selecting No Ease from the easing drop-down list or clicking the minus icon on the easing section and choosing the easing you would like to remove. In this example, we will remove the Spring easing.

Click the plus icon next to the Ease section and choose Custom from the drop-down list. This will create a new custom easing curve with a green curve to indicate it is editable. If you create additional custom easing curves, each curve will have a unique color associated with it.

The ease curve works similarly to drawing paths. You can create points on it; these points represent the keyframes or the points that indicate changes in the easing animation. Each point has two handles to change how the right and left parts of the curve look. Now, we will create points on the easing curve that will affect the door animation:

Use the point handlers on the last two points to create a smooth curved slip to make the door animate slow at the end of the animation. The final easing curve should like the figure below: 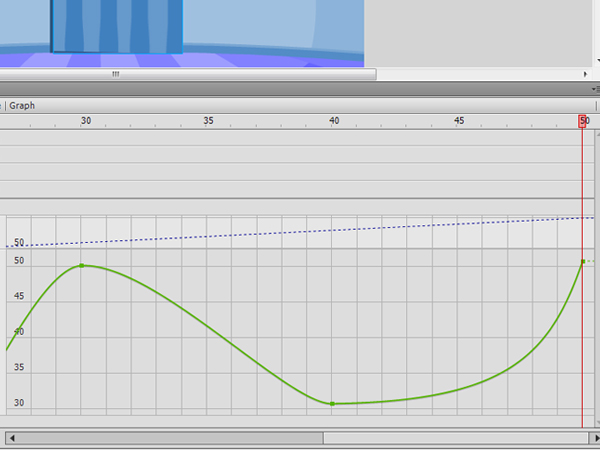 Press Ctrl+Enter to test the animation and see how the new easing curve affects the door animation. The final animation for the custom easing should be as below:

This is the end of the tutorial. It aimed to help you understand how to use Flash's 3D tools to create animation in 3D space and apply the comprehensive easing features in the Motion panel through the easing curves.

Understanding Easing curves can help you create complex, realistic animation more easily and efficiently by applying easing curves to the animation instead of creating many keyframes in motion tweening.

You will also find this video tutorial by Tom Green useful in understanding more about the Motion Editor in Flash: Flash CS4 Motion Editor.

Rafiq Elmansy
Author, design consultant, Egypt
Rafiq Elmansy is a professor of design, author and design consultant. He is the founder of Amazon. His articles appear in many publications and on many websites including Adobe Inspire Magazine, Smashing Magazine, and Design Management Review. Elmansy is an Adobe Certified Instructor and Adobe Education Leader working with Adobe to develop their applications and write Adobe certification exams for Certiport. His design design work is exhibited in many countries and he is also a jury member in design competitions including the Adobe Design Achievement Awards, A’Design Awards and Poster for Tomorrow.
rafiqelmansy
Weekly email summary