Every web developer knows that creating an administration interface for their projects is an incredibly tedious task. Luckily, there are tools that make this task considerably simpler. In this tutorial, I’ll show you how to use Active Admin, a recently launched administration framework for Ruby on Rails applications.

You can use Active Admin to add an administration interface to your current project, or you can even use it to create a complete web application from scratch - quickly and easily.

Today, we’ll be doing the latter, by creating a fairly simple project management system. It might sound like quite a bit of work, but Active Admin will do the bulk of the work for us!

Step 1 - Set up the Development Environment

I’m going to assume you have some previous Ruby on Rails knowledge, especially involving model validations, since the rest of the application interface is going to be taken care of by Active Admin. Apart from that, you should have a development environment for Ruby on Rails 3.1 already set up, including Ruby 1.9.2.

Refer to this article if you require assistance installing Ruby and Rails.

Create the application we’ll be working on, by running the following command in your Terminal:

Next, open your Gemfile and add the following lines:

The last gem is required for Active Admin to work with Rails 3.1, so don’t forget it. After that’s done, run the bundle install command to install the gems. Now, we need to finish installing Active Admin, by running the following command:

This will generate all needed initializers and migrations for Active Admin to work. It will also create an AdminUser model for authentication, so run rake db:migrate to create all the needed database tables. Apart from that, you need to add one line to your config/environments/development.rb file, so sending emails works:

Once that’s done, run rails server and point your browser to localhost:3000/admin. You’ll be greeted with a nice login form. Just type “admin@example.com” as the email and “password” as the password, and hit “Login”. You should now see a nice administration interface.

As you can see from the webpage you just generated, there’s not much you can do, yet. We’re going to need a way to edit our users, and we can do that using Active Admin. The framework uses what it calls “Resources”. Resources map models to administration panels. You need to generate them using a command in your terminal, so Active Admin can know their existence, so go ahead and run:

The syntax for that command is simple: just write the database model’s name at the end. This will generate a file inside the app/admin folder, called admin_users.rb. Now, if you refresh your browser you’ll see a new link at the top bar, called “Admin Users”. Clicking that will take you to the Admin User administration panel. Now, it’ll probably look a little too cluttered, since by default, Active Admin shows all of the model’s columns, and considering that the framework uses Devise for authentication, you’ll see a bunch of columns that are not really necessary. This takes us to the first part of our customization: the index page.

Customizing Active Admin resources is fairly easy (and fun if you ask me). Open app/admin/admin_users.rb on your favorite text editor and make it look like this:

One final step for this view is to customize the form. If you click the “New Admin User” link on the top right, you’ll see that the form also contains all of the columns on the model, which is obviously not very useful. Since Active Admin uses Devise, we only need to enter an email address to create a user, and the rest should be taken care of by the authentication gem. To customize the forms that Active Admin displays, there’s a method, called (you guessed it) form:

If the code looks familiar to you, you’ve probably used the Formtastic gem before. Let’s take a look at the code:

You can further customize the forms using the DSL (Domain Specific Language) provided by Formtastic, so take a look at tutorials about this gem.

One last step for this form to work: since we’re not providing a password, Devise is not going to let us create the record, so we need to add some code to the AdminUser model:

The after_create callback makes sure Devise sends the user a link to create a new password, and the password_required? method will allow us to create a user without providing a password.

Go try it out. Create a user, and then check your email for a link, which should let you create a new password, and log you into the sytem.

We are going to create a simple Project Management system. Not anything too complicated though, just something that will let us manage projects and tasks for the project, and assign tasks to certain users. First thing, is to create a project model:

Active Admin relies on Rails’ models for validation, and we don’t want projects with no title, so let’s add some validations to the generated model:

Now, we need to generate an Active Admin resource, by running:

For now, that’s all we need for projects. After migrating your database, take a look at the interface that you just created. Creating a project with no title fails, which is what we expected. See how much you accomplished with just a few lines of code?

This creates a task model that we can associate with projects and users. The idea is that a task is assigned to someone and belongs to a project. We need to set those relations and validations in the model:

Remember to add the relations to the Project and AdminUser models as well:

Migrate the database, and register the task model with Active Admin:

Now go and take a look at the tasks panel in your browser. You just created a project management system! Good job.

Step 5 - Making It Even Better

The system we just created isn’t too sophisticated. Luckily, Active Admin is not just about creating a nice scaffolding system, it gives you far more power than that. Let’s start with the Projects section. We don’t really need the id, created and updated columns there, and we certainly don’t need to be able to search using those columns. Let’s make that happen:

The project’s detail page is a little boring don’t you think? We don’t need the date columns and the id here, and we could show a list of the tasks more directly. Customizing the detail page is accomplished by using the show method in the app/admin/projects.rb file:

Let’s walk through the code:

Step 6 - Some Tweaks for the Tasks

Check it out! Just above the table, you’ll see some links, which quickly show you how many tasks there are per scope, and lets you quickly filter the list. You should further customize the table and search filters, but I’ll leave that task to you.

We’re now going to tweak the task’s detail view a bit, since it looks rather cluttered:

This will show a table for the attributes of the model (hence the method’s name, attributes_table_for). You specify the model, in this case task, and in the block passed, you define the rows you want to show. It’s roughly the same we defined for the project’s detail page, only for the task. You may be asking yourself: What’s that “active_admin_comments” method call for? Well, Active Admin provides a simple commenting system for each model. I enabled it here because commenting on a task could be very useful to discuss functionality, or something similar. If you don’t call that method, comments will be hidden. 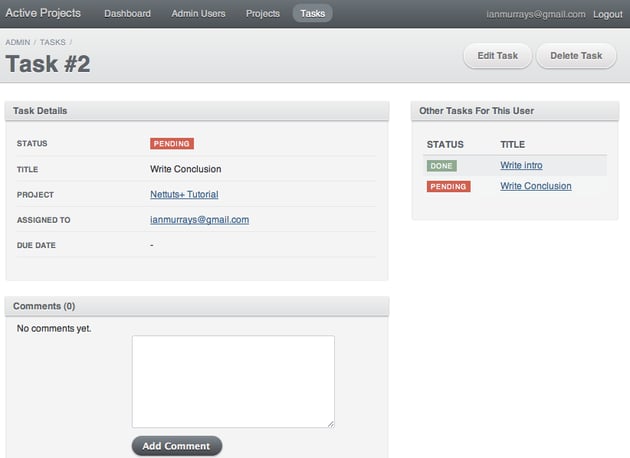 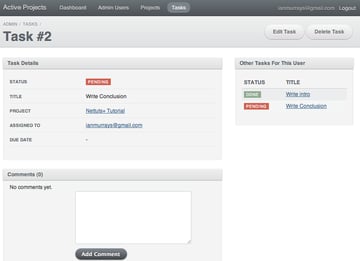 There’s another thing I’d like to show when viewing a task’s detail, and that’s the rest of the assignee’s tasks for that project. That’s easily done using sidebars!

This creates a sidebar panel, titled “Other Tasks For This User”, which is shown only on the “show” page. It will show a table for the currentadminuser, and all tasks where the project is the same as the project being shown (you see, task here will refer to the task being shown, since it’s a detail page for one task). The rest is more or less the same as before: some columns with task details.

You may have noticed, when you first launched your browser and logged into your app, that there was a “Dashboard” section. This is a fully customizable page where you can show nearly anything: tables, statistics, whatever. We’re just going to add the user’s task list as an example. Open up the dashboards.rb file and revise it, like so:

The code should be fairly familiar to you. It essentially creates two sections (using the section method and a title), with one table each, which displays current and late tasks, respectively.

We’ve created an extensive application in very few steps. You may be surprised to know that there are plenty more features that Active Admin has to offer, but it's not possible to cover them all in just one tutorial, certainly. If you’re interested in learning more about this gem, visit activeadmin.info.

You also might like to check out my project, called active_invoices on GitHub, which is a complete invoicing application made entirely with Active Admin. If you have any questions, feel free to ask them in the comments, or send me a tweet.

RubyWeb DevelopmentRuby on Rails
Did you find this post useful?
Yes No
Would you like to provide feedback (optional)?
Cancel Submit