In this tutorial, I will explain you step by step how to create a modern, hybrid, mobile application (iOS and Android) of your WordPress website using the latest technologies. We'll be using Ionic Framework, ECMAScript 6, npm, webpack, and Apache Cordova.

Ionic Framework ecosystem is large, including Ionic CLI (command line tool), Ionic Push (easy push notifications), and Ionic Platform (backend services). It is currently one of the top open-source projects on GitHub with more than 19,000 stars and over 600,000 apps created.

Ionic covers all your application's needs. However, for this tutorial I will only focus on Ionic Framework (or Ionic SDK), which is a set of AngularJS directives (Web Components) and services.

ECMAScript 2015 (6th Edition) is the current version of the ECMAScript Language Specification standard. ES6 got officially approved and published as a standard on June 17, 2015 by the ECMA General Assembly.


ECMAScript 6 gives you access to a lot of new features, many of which are inspired by CoffeeScript, including as arrow functions, generators, classes, and let scoping. Even though ES6 got approved recently, you can use it right now using a JavaScript compiler, such as Babel.


Node Package Manager is the most popular package manager in the world. The number of packages is growing faster than Ruby, Python, and Java combined. npm runs on Node.js.

We opt for npm, because using both Bower and npm in the same project is painful and CommonJS support with Bower isn't straightforward. CommonJS defines a module format to solve JavaScript scope outside the browser and npm supports this. CommonJS modules can be required using ES5 or ES6.

In my opinion, webpack has been a game changer in the industry, exit complicated Grunt or Gulp scripts that you need to maintain. webpack allows you to require any type of file (.js, .coffee, .css, .scss, .png, .jpg, .svg, etc.) and pipe them through loaders to generate static assets that are available to your application.

The difference with Grunt and Gulp is that the majority of your needs (minification and compilation) can be covered by just adding some configuration, there's no need to create scripts. For instance, requiring a Sass file, compiling it, autoprefixing it, and injecting the resulting minified CSS into your application will be as simple as this:

I don't think I need to show you the equivalent using Gulp or Grunt. I think you get my point.

This tutorial assumes that you have:

Before we get started, you will need to install two things:

To fetch the posts for your WordPress installation, you will need to install  WP REST API plugin. Make sure that you install version 1.2.x as version 2.x is on its way.

If the installation was successful, open a browser and enter http://example.com/wp-json. This should give you a response similar to the one below.

To install the application, clone the repository, using the following commands.

Next, create a configuration file and install the dependencies.

To make sure both the application and the REST API work together, open config/config.json. This is your personal configuration file, which is ignored by Git. Change the base URL of the API to the one for your WordPress installation.

Run npm run devserver and open http://localhost:8080/webpack-dev-server/ in a browser. If everything works as expected, you should be in front of a running application that displays your WordPress posts. I have created a demo application to give you an idea of what to expect.

Now that you can see the result of what we are after, let me go through the details. Note that the following code samples are simplified. You can find the source code on GitHub.

The npm install command installed several libraries. Some of them are direct dependencies while the rest are development dependencies.

wp-api-angularjs (WordPress WP API client for AngularJS) is a set of AngularJS services that allow communication with the REST API plugin that you installed earlier. You can see the complete list of dependencies on GitHub.

I have been developing AngularJS applications for a long time and after a lot of experimenting I have committed to the following architecture:

These recommendations are powerful as they assure that you to have loosely coupled modules that can be shared by several applications without running into problems.

This is what the application folder structure looks like:


When using webpack, an entry point is necessary. Our entry point is lib/index.js. It contains our application's basic dependencies (such as ionic.bundle that contains AngularJS), our home-made modules, and adds the Sass entry point.

Now that we have imported our dependencies we can create our application module. Let's call our app prototype. It has ionic, wp-api-angularjs, and our home-made modules as dependencies.

Once the module is created, we can export it as a standard CommonJS module.

This is a great example of what an AngularJS module should look like. 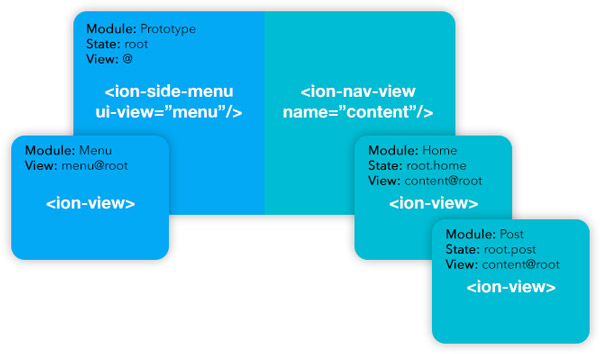 Our application has a side menu <ion-side-menu ui-view="menu"> in which the Menu module will be rendered. It also has a content section <ion-nav-view name="content"> in which the Home and Post modules will appear.

The ui-view directive is part of the UI-router that Ionic uses. It tells $state (UI-router service) where to place your templates. Similarly, the name directive attached to <ion-nav-view> is a custom Ionic directive that is using ui-view underneath. You can consider both directives identical.

Here is a simplified version of the root state, the state that all modules share:

For more information about named views, please refer to the documentation on GitHub.

The Menu module is very simple. Its purpose is to add a menu inside <ion-side-menu>. Without this module, the side menu would be blank. The menu module declares only a config file, it has ionic and ui.router as dependencies.

The most interesting part is the configuration. We do not want to create a state for the Menu module as it is available everywhere. Instead, we decorate the root state with the menu content. With the ui-view="menu" being defined in the root state, we need to use menu@root to refer to it.

The Home module displays the latests posts of your WordPress website. It has a config file, a controller, and it depends on the following libraries:

The config adds a new state, root.home, with the /home URL that has a template and a controller (both living within the module).


This is a simplified version of the Home controller logic. It contains two functions:

The template has a ion-refresher directive that allows users to reload the page by pulling the page down. It also has a ion-infinite-scroll directive that calls the loadMore function when reached. Posts are displayed using the ng-repeat directive.

Tip: Use the track by expression for better performance. It minimizes DOM manipulation when a post is updated.

The Post module displays only one post. It has a config file, a controller, and it depends on the same librairies as the Home module.

Similar to the Home module, the config adds a new state, root.post, with the /post/:id URL. It also registers a view and a controller.


The controller retrieves the post specified in the url /post/:id via the $stateParams service (UI router service).

The template has a ion-spinner directive that displays a loader while the data is being fetched from the WordPress REST API. When the post is loaded, we use an Ionic card to render the author avatar, the post title, and the post content.

Tip: Use the bindOnce expression, ::, (introduced in Angular 1.3) to avoid watching data that will not change over time.

The bootstrap.scss file that we imported in our entry point is as simple as this:

First, we import our variables. We then import the Ionic styles. Importing our variables before Ionic allows us to overwrite whatever Sass variables Ionic has declared.

For example, if you want the positive color to be red instead of blue, you can overwrite it like this:

Run the following commands inside the project folder and chose the platform you want to build for.

In addition to installing platforms within the /platforms folder, the script will install one plugin. For the demo, we need the cordova-plugin-whitelist plugin. It is necessary to allow the application to query the WordPress REST API we created earlier.

If you open config.xml, you will see that we allow access to any kind of origin (<access origin="*" />). Of course, this is only for demo purposes. If you deploy your application to production, then make sure you restrict access like this:

Running the npm run runAndroid command is a shortcut for rm -rf www/* && webpack && cordova run android. This removes everything within the www folder, dumps a non-minified version of the app in it, and runs the android command. If an Android device is connected (run adb devices to make sure), the command will load the app on the device, otherwise it will use the Android emulator.


If you do not have an Apple device, you should install the iOS Simulator. It's really good and better than the Android emulator.

With this tutorial, I've tried to show you how easy it is to create a hybrid, mobile application for your WordPress website. You should now be able to:

If you want to go further, then take a look at a project I created few months ago, WordPress Hybrid Client.

WordPress Hybrid Client (WPHC) is an open-source project available on GitHub that helps you to create iOS and Android versions of your WordPress website for free. WPHC is based on the same technology stack that we used in this tutorial. 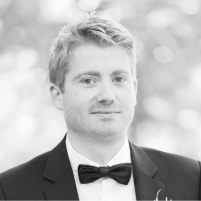 Julien Renaux
Freelance front-end Engineer - Mexico city
Julien is a front-end Mobile Engineer with experience working for startups and multinationals across the world. As a certified Scrum Master, Julien has worked with a team of 10 engineers located in three different countries for eBay. He spends most of his free time writing on his blog, developing his own open source projects, or contributing to JavaScript projects such as Ionic Framework, Angular Material, and various AngularJS plugins.
julienrenaux
Weekly email summary
Subscribe below and we’ll send you a weekly email summary of all new Code tutorials. Never miss out on learning about the next big thing.
Advertisement
View Online Demo View on GitHub
Translations