Command Line Basics and Useful Tricks With the Terminal

In this post, we'll go over what the command line is, as well as some commands to get started using it.

What Is the Terminal?

The terminal is an interface for you to execute text-based commands, and it gives you direct access to the underlying operating system, via a shell, on your Mac. A long time ago, before computers had graphical user interfaces (GUIs), the only way to operate a computer was through the command line. Needing to run the computer through the command line helped users better understand what was going on inside their computer.

Ever since GUIs became commonplace, we have almost forgotten about the command line, and the typical Mac user probably doesn't even know that it exists. This may be okay for the layperson, but as software developers, it's still crucial that we know how to use the terminal.

Why Use the Terminal?

Wasn't the whole point of graphical user interfaces to eliminate the need for a command line? Well, not really. There are still several reasons that you should learn how to use the terminal if you are a developer, or even a user who cares about performance:

Those are just a few of the reasons that the terminal is still a useful tool today. It's a practical and functional tool to improve and enhance your daily interactions with your computer.

The terminal is located in your Applications folder within a subfolder called Utilities. If you cannot find it, activate Spotlight search by pressing Command-Spacebar and search for Terminal. Once you have it open, you should see something which looks like this:

This is called the "command prompt"—you'll see the current directory, then your username followed by a $.

To run a command, simply type it in at the command prompt and press Enter. Try it now with the command ls—this will list all the files in the current directory. Often, online instructions will write commands to be entered starting with a $. You don't need to type this out. For example:

For the command above, you would just type cd ~/Desktop, omitting the $.

Here is a list of some of the basic commands that you'll need to know in order to use the terminal effectively. This is a handy cheat sheet for the most important and most commonly used commands.

Now that you know a few of the basic commands, let's go a little bit more in depth to take a closer look at some of the things you can do with the terminal.

1. Change the Default Format for Screenshots

We all know about using Command-Option-4 to take screenshots on our Macs. And although it's great that these screenshots are taken in high-quality PNG files, we don't necessarily want 15 MB to 20 MB of our precious storage taken up for every single screenshot. Luckily, you can change this default with the terminal.

After your prompt (remember, it's that $ sign), type in the following command:

After you press Enter, you will notice that the file type of your screenshots has changed to what you just set it to. You can use any format such as PDF, JPG, and more, but for this example I have used JPG.

There is a simple command which many Apple technicians use when your computer is acting up. This command stresses your CPU by simply printing the letter "y" over and over. If you open your Activity Monitor, you will soon see that this process takes up most of your CPU!

In order to do this, after the prompt, all you need to do is type the following command:

This seemingly innocent command will stress your Mac's CPU to the max, and will easily help you check if your computer is crashing under pressure.

3. Stop Your Mac From Sleeping

Isn't it annoying when you are installing or uploading something on your Mac, and your Mac keeps going to sleep? This amusingly named command will make sure that doesn't happen.

All you need to do is type the following command after the prompt: 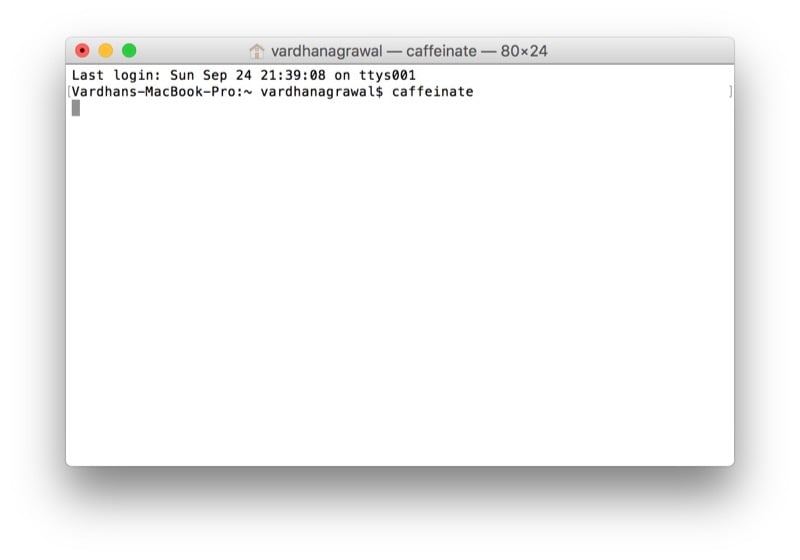 Press Enter, and your Mac won't sleep, dim, or turn off. Once you're ready to disable this, all you need to do is press Control-C  from the terminal.

To make all hidden files visible, enter the following command after the prompt:

And then, type this command to reset Finder after the prompt:

If you want to hide them again, enter the following command after the prompt:

And then reset Finder again:

We've all gone through the process of downloading files, unzipping them, and using them. But that can be a hassle, especially when you need to do this multiple times. Using the terminal, you can do this with the URL of your download file.

To do this, use the curl command as follows:

7. How to Shut Down or Restart Your Computer

Another simple way of shutting down your laptop is through the terminal. Below is the command for shutting down and restarting your computer.

8. How to Check the IP Address of a Website

With the terminal, you can easily check the IP address of any website with the following command:

9. How to Hide a Folder With the Terminal

Some folders are not supposed to be accessible to everyone with your laptop. Hiding a folder can be hard, but it's simple in the terminal with the following command:

After successfully hiding this folder, how do you recover it? Well, it's very simple—you can unhide your folder with the following command:

Although it may seem daunting at first, the command line is an extremely powerful tool that, in some cases, is easier to use than the GUI. I hope you enjoyed this tutorial and found it helpful.

For more about coding for Mac and iOS, check out some of our other tutorials here on Envato Tuts+.

This post has been updated with contributions from Ezekiel Lawson. Ezekiel is a front-end developer who focuses on writing clean, maintainable code with web technologies like JavaScript, Vue.js, HTML, and CSS.

Vardhan Agrawal
Self-Taught iOS Developer and Instructor
Vardhan is a self-taught software developer and has actively been making contributions to the machine learning community. Not only does he tinker with new projects and ideas, but he also makes it possible for others to do the same by authoring in-depth and easy-to-follow technical tutorials with Envato.
vhanagwal
Looking for something to help kick start your next project?
Envato Market has a range of items for sale to help get you started.