Circular Motion in AS3: Make One Moving Object Orbit Another

Having one object orbit another is a movement mechanic that's been used since the early gaming era, and it remains handy to this very day! In this Quick Tip we will explore the mathematical function for orbiting, see how to modify it, and look at practical uses in actual game design.

Here's what we will be working towards:

To create an orbit we must define the following:

It is also helpful to note that Flash's coordinate system is like a regular cartesian plane, except that the y-axis is flipped, so the value increases as we move downwards. The top-left corner of the stage has coordinates (0,0) 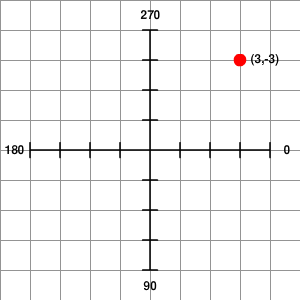 Another thing that we need to understand is how to convert degrees to radians, which can easily be accomplished using the following formula:

Here's the actual orbiting function: it requires two lines, one to position the orbiter on the x-axis and the other to position it on the y-axis:

(In a normal Cartesian plane, sin is used for the x-coord and cos is used for the y-coord, but since our angles are increasing clockwise - due to the reversed y-axis - their places are swapped.)

Step 2: Writing the Equation in Code

We can now turn the logic into actual code that we can use. First, declare all of the variables:

Next rewrite the equation for use in AS3 and put it into an ENTER_FRAME event handler function:

If you test now, nothing will happen; this is because the variable angle is neither increasing nor decreasing. Therefore, we must increase or decrease the value:

Now what if we want our orbiter to continuously face a direction? Well I have written an equation to do just that!

Depending on which way you have drawn your orbiter movieclip you may have to subtract a certain angle (outside the brackets) to get it to face the correct way.

We can also shift the orbit in any direction we want by adding or subtracting from the equation on either axis:

If you want to learn more about cos, sin, and atan2, take a look at Trigonometry for Flash Developers.

Step 4: Practical Uses for the Equation

Now this is all fine and dandy, but what can it actually be used for? A wide variety of things actually!

If you have ever played Mario Kart you would have gotten the "three shells" powerup; those shells are orbiting using this very technique. Another example is the widely over-used circle pong game, where the paddle orbits along a ring on the outside. A third example is from top down zombie shooter games: a lot of them include a powerup where a grouping of barrels orbits around your player and crushes any zombies if they are hit trying to attack you.

As you can see the use for this technique can be used in anything from industry standard games to casual games.

Thank you for taking the time to learn this Quick Tip! If you have any questions leave a comment below.