Navigation is a crucial part of your website, but often a bore to build and maintain. In this tutorial I'll describe a quick and solid way of using basic ActionScript skills, blended with a bit of your creativity, to construct intuitive & user friendly navigation systems. Okay, time to get our hands dirty, well... sweaty maybe...

This tut demonstrates how to prevent double-clicking items within the menu, a much overlooked item that enhances your online experience. You'll also learn how to create and combine multiple arrays with ease. First we'll layout the scene, place keyframes and labels, then at the end we'll add some ActionScript to make it come alive. We'll also learn how to create page transitions which add a nice little extra to your website.

In retrospect, this tutorial is very simple, but it covers a lot of hidden gems. Be creative, link the data with xml, alter the mask shapes, change the button rollOver states and enjoy it.

Create a new ActionScript 3 document : 600px X 400px, 30frames per second and use white as a background. First things first, lets create the button. Draw a textbox on stage and give it an instance name of "txt". To do this go to your properties panel (CTRL F3 / Window > properties > properties). Now covert it into a symbol (F8 / Modify > Convert to Symbol), choose movieclip and make sure the registration point is at the top left. Name the instance "button_text_mc".

On a new layer, make a rectangle which fits the boundings of your text movieclip. This will function as a hit area for your button. Convert it into a symbol.

Now select both layers and convert them into a symbol. Name this instance "hitarea_mc". Make sure you put the alpha value of "hitarea_mc" at zero in the properties window.

Now let's make a holder for our buttons. Of course you can make this more advanced by making this a full dynamic navigation with xml or php, but for the sake of this tutorial we'll use
some ActionScript to name our menu items and fill in the functionality.

Drag one instance of the movieclip "button_movieclip" on stage for each item you want for your navigation. We'll use 6 in this case. Now give each instance a unique name; I chose b1,b2,... up to b6. Next we're going to wrap this all up in a new movieclip named "menu_total".

The good thing about this is, if we want to use it later on we can simply drag the "menu_total" clip out of the library and use it directly. You should now have a single movieclip on stage holding six buttons which we'll transform into our navigation.

Step 3 : rollOver/rollOut States on the Timeline

Aah the fun part. Some animation and trickery. As you see in the example, the menu only reveals itself when the mouse cursor moves near the menu box and line. To achieve this, we'll need an invisible hitarea and some keyframes to move to a different state of view.

Make sure you are inside the "menu_total" movieclip and create 2 new layers at the very top of your layers: one named "code", the other named "labels". Select the "labels" layer and add a blank keyframe on frame 1, 2, 10, 24, 25, 37. Now name the second framelabel "CLOSED", the 10th framelabel "OVER" and the 25th framelabel "OUT".

Create a new layer underneath the buttons layer and name it "hit_area", then take the movieclip "hitarea_mc" from your library and place it to the left of the buttons. Lastly, rescale it so the user has some room to move the mouse. Make sure the keyframes for "HOVER" only reach to frame 10.
Create yet another layer and name it "menu_out", then go to frame 10 and place another copy of the "hit_area_mc" on stage. Give it an instance name of "HOVEROUT_MC" and make sure that both these movieclips have an alpha value of 0. Also, these two hit area movieclips need to overlap a bit. Otherwise Flash will lose the hit test when you move the mouse towards the buttons.

OK, with all that done, your frames and labels should now look like this: 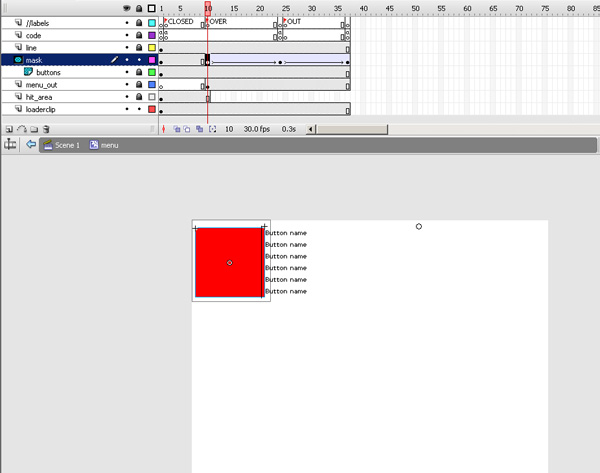 This is how the hit areas for the mouse should look: 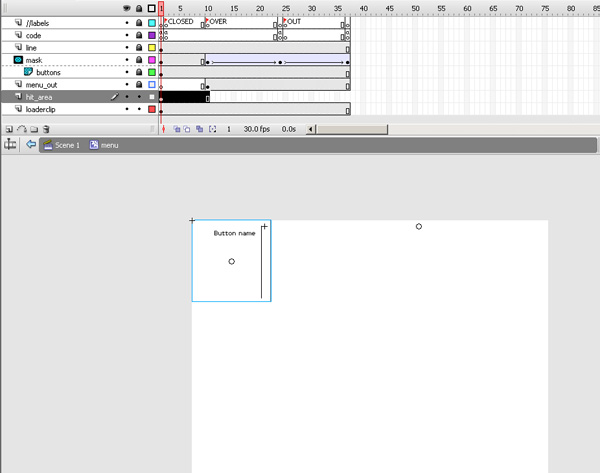 This is what the second hitarea should look like: it starts on the keyframe of the over state. 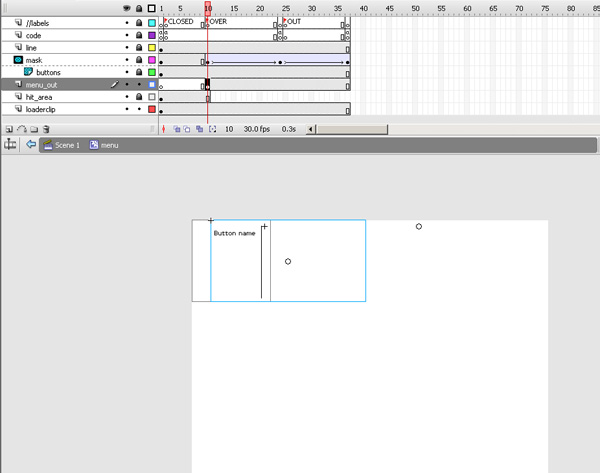 Now let's take a look at the masking. 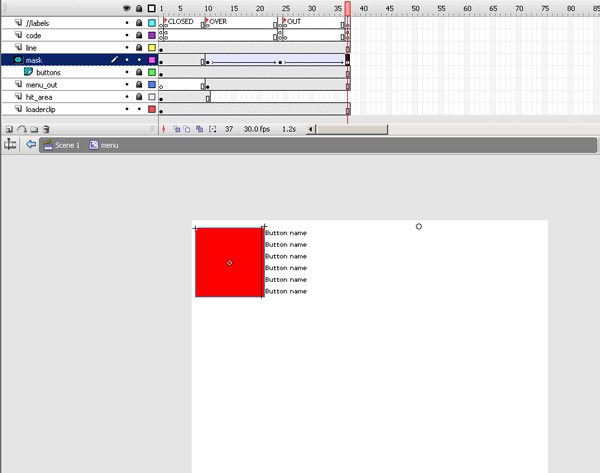 Across the span of your animation for the rollOver/rollOut states, make an empty movieclip and give it an instance name of "loaderclip".

This bit's entirely up to you and your imagination, but here's a basis which should get you started. Create a new ActionScript 3.0 file with the same dimensions as your main file. Build your page in/out animation. Make sure you place a stop(); command at the end state of your animation (the place where the actual content will come). Save your files as page1.swf, page2, ... up to the amount of buttons you created, in this case 6.

In my utterly simple example I started with a small box which tweens along the timeline from alpha 0 to 100 whilst it grows to its final height. 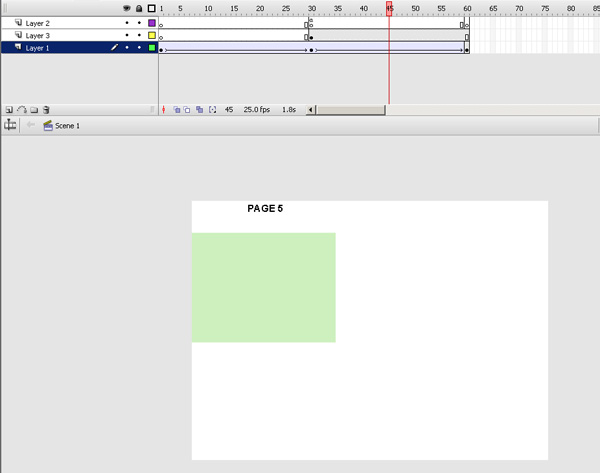 Right, now some ActionScript time. First of all, you can spice up whatever happens with the menu however you wish. For example, you could use more advanced rollOver/rollOut animations.
For the sake of this tutorial I've chosen a very simple effect.

You will need to download and import the opensource class built by Grant Skinner named "tweenmax". Make sure you download the AS3 version. We'll also use the built in classes for the transitions.

With your code layer selected on frame one, enter the code in the following steps (I will explain each line in the comments).

Note: from this point it's very easy to make a new array with all your actions and link it to the onRelease handler, the same way as you link the buttonnames to the actual movieclips. With minimal effort you can build a very strong navigation system that can be reused over and over in no time. You could build a class for this, but that's not the purpose of this tutorial.

Step 10: Action!..Set Up Arrays With Our Data

Step 11: Action!...Loop Through the Button Array

This is the main core of our project. Every important step is commented in the code.

Finally, we move up one frame. Make sure you're at frame 2 of the menu_total movieclip.

Now move over to frame 24 of the menu_total movieclip.

On the last frame of your animation, simply set the following line of code. The reason being that we skip frame 1 so the menu doesn't load again thus losing the active/disabled state.

So there we are! You learned how to enable/disable clicked buttons in an array with combined data, use masking techniques and how to create simple but effective menu systems which can be reused with minimal effort. All this with a simple but effective page transition. I hope you enjoyed this one and found a practical way to speed up your workflow in Flash. 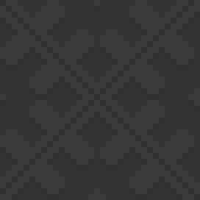 Peter Eeckelaert
Nit'ras founder Peter Eeckelaert delivers to-the-point graphic design. With an expertise of more as 10 years in corporate, minimalistic design and the music industry he has developed a wide range of graphical skills that helps him to translate the message from the client to its target audience in a most optimal way. Digging deep in Flash and air with keeping a close eye on todays web standards, he aims to think outside of the box. His work is regularly featured on design portals and books. Most recently he joined the newly formed web team at Comfi, where he is surrounded by talents each in their own fields to spread the message even further. "Fine-tuning the aftermath" is what drives his motivation.
Weekly email summary