Build a Caterpillar Game with Cocos2D: Movement and Missiles

This is the fifth installment of our Cocos2D tutorial series on cloning Centipede for iOS. Make sure you have completed the previous parts before beginning.

In the last tutorial, we discussed the AI of the caterpillar. You learned how to move the caterpillar through the sprout field as well as the bounds of the level.

In today's tutorial, we will be jumping all over the place as we discuss the player movement/interaction and firing missiles.

Controlling the player is actually quite simple. The first thing we need to do is tell our game layer to swallow touches in order to interact with it. Add the following code to your init method in GameLayer.m:

As you saw in the first tutorial, this line of code will simply allow GameLayer to be a touch delegate allowing it to receive notifications of touches. Now, there are two methods that we need to implement. Add the following methods to GameLayer.m

Now if you run the game, you should be able to drag anywhere on your game area and move the player within the confined space.

The missile object is what allows the player and the other game objects to interact. The player will fire a constant stream of missiles with the speed and frequency varying on the current level.

Before we begin creating the Missile, we need to establish a few constants that will be used. Open GameConfig.h and add the following lines:

I will explain each of these as they come up in the code that follows. Now, create a new GameObject subclass called Missile. Add the following code to Missile.h:

The dirty property will be used in the future to denote that this missile is no longer in play. This could be because of it going off screen or colliding with another game object. Since the missiles are constantly moving, they will need an update method to animate them.

Now, open up Missile.m and add the following code:

Now that we have some missiles to fire, we need to fire them off from the player. Generally, when you have a large amount of objects such as missiles, you want to reuse as many as possible and not allocate new ones while the main loop is running. To solve this issue, we will create two arrays. One array will hold all of the missiles that are currently in play (ie fired by the player) and the other will hold the pool of missiles that have yet to be fired. At the end of the update method, we will clean up all of the dirty missiles and move them from the "in play" array to the "pool" array.

Add the following properties to your GameLayer.h file:

Now open GameLayer.m, import Missile.h, and add the following lines in to your init method:

Next, jump down to the update method and add the following code:

This is all of the code needed to animate the missiles. Go ahead and run the game at this point and watch the missiles fire from the player as you move around. 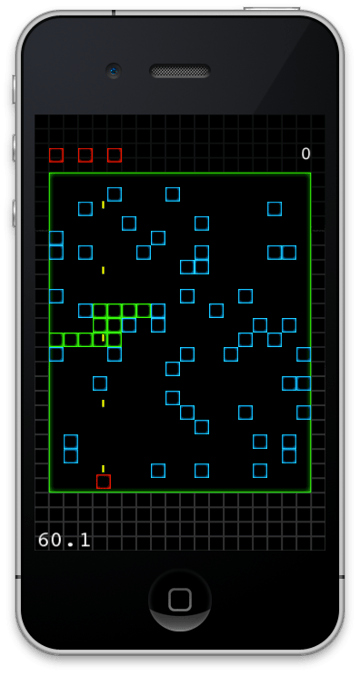 Now that we have enabled some player and missile animations, it's really starting to feel like a game. We also did some basic collision detection between the player object and the sprout object. In the next tutorial in the series, we will dig deeper into collision detection as we establish collisions between the missiles and the sprouts, missiles and the centipede, and player and the centipede.

Brandon Trebitowski
Brandon Trebitowski is a software developer and author from Albuquerque, New Mexico. Brandon holds a BS in Computer Science from The University of New Mexico and has been developing software for the last 8 years. In August of 2008, he started iCodeBlog.com to teach aspiring developers how to write software for the iPhone. After the blog was acquired by ELC Technologies in December of 2008, he began working full time for them developing mobile software. Brandon has a strong passion for programming and loves sharing it with others.
Weekly email summary