The Twitter API provides a wealth of resources to extend the functionality of mobile applications. When working with this API, results can be provided in either the XML or JSON data format, and this tutorial will be using the lightweight JSON format to create a Twitter iPhone application that will read the latest tweets by Mobiletuts+. We will see how the Appcelerator SDK makes the development of our application a piece of cake!

Fire up Titanium Developer and create a new project. Select "Mobile" from the drop-down for the Project Type.

Give your application a Name and an App ID, choose a directory to save your project within, and pass in a URL in the Company/Personal URL field.

Titanium Developer provides us with the following default application when we create our project: 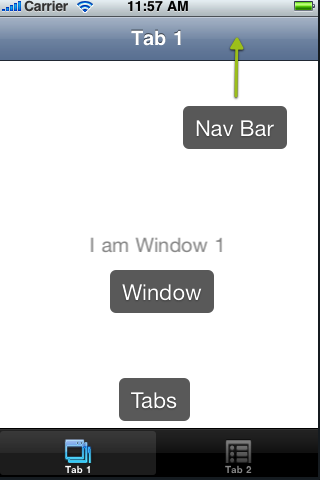 The default application consists of two tabs at the bottom of the screen, and a navigation bar on the top. The white area in the middle is referred to as a window. Each tab is held by a tab group, and, further up the view hierarchy, each tab is associated with its own window to be displayed when the tab is selected. The labels in the window are considered "children" of the window.

The project consists of multiple files by default. The file "app.js" (located in the Resources folder) is the backbone of our application. All the coding is done in this file and other files linked to this file.

So, let's begin by opening app.js. Delete the default code, and create our tab group by entering the following:

The above code creates a tab group named "tabGroup" that will hold out tabs. The "open()" method will open our tab group after the application loads.

Note:
All user interface elements in Appcelerator are variables.

We will now create the tab which will hold our Twitter window and content. The tab will be a child of the tab group we created in step 2.

The method for creating a tab requires three arguments: "title," "icon," and "window." The arguments are passed inside of a pair of curly braces.

Let's go over what each argument does:

Apply the above with the following code:

Lines 2- 6 create the main tab for our application, and line 9 adds that tab to our tabGroup to be displayed on the screen.

Let's continue by creating our window.

The method to create a window is similar to those used to create our tab group and tab. The arguments are:

Type the following to create the main window:

Your code should now look something like this in app.js:

Don't forget to create the "tweets.js" file in the Resources folder or you will get an error when you launch the application. You can leave it empty for now.

Launch the project from Titanium Developer. If you have followed correctly, you should see something like this in the iPhone Simulator:

Now we are done with coding in "app.js." The rest of the tutorial will cover the code needed for "tweets.js." Go ahead and open it now.

We need a variable to hold the current window. This is done by the following method:

Now we can communicate with the window which we are currently in through the variable "win." To keep our code semantic, we would like to make a function that is responsible for getting our tweets, and displaying them in our application. Let's create a function called loadTweets():

Let's continue by creating an empty array that will hold the data for our table view which we will create later on in this tutorial. The data for each row is passed inside of a pair of curly braces:

The Twitter API provides us with many methods to get tweets from Twitter. You may want to head over to the official Twitter API documentaiton for further details. The method that we are interested in is statuses / user_timeline.

A typical response from Twitter to the request we are going to make looks something like this in JSON:

We need to make an HTTP request in order to get the data from Twitter. The method type for our HTTP request is going to be "GET" and the url will be:

We are going to use the createHTTPClient() method provided by the Titanium API to make our HTTP request to Twitter API. You might want to head over to Titanium documentation for more information on the HTTP Client over here. Let's implement this in our code:

The "open()" methods requires two arguments separated by a comma. The first argument is the method of the HTTP Request, which in our case is going to be the "GET" value.

The second argument is the URL of the API which we will get our data from. The "onload()" method is run when the data is received and is ready for us to work on. This is where we parse the JSON we receive, and display it in a table view. We will work on it in the next step.

The "send()" method sends the HTTP request. One advantage of this method is that it shows an activity indicator in the status bar by itself rather than us coding for it.

Now that we have our HTTP client, let's parse the JSON that we receive.

First, we evaluate the JSON which we receive through the "eval()" function. We pass in the JSON as a string. Javascript does the rest of work for us. We store the parsed JSON in a variable called "tweets."

Now that we have our parsed JSON in the variable, we would like to run through all the keys inside the variable and get the keys "user," "text," and "profile_image_url" for each tweet. We will create a for loop to do so:

Now that we have the tweet, the user, and the avatar, let's make a view that will hold the information.

Let's implement this in our code:

First we create our post_view and row. We set our row's height to auto so that it can expand or contract as needed. We also set our view's height to auto and layout to vertical. The view positions itself 5 pixels away from all the four sides of its parent.

Now that we have our post view and row ready for us to work on, let's create an image view that will hold our profile image. The image view will have both height and width set to 48 pixels. Then we add our image view to the post view, as shown below:

Next, create a label that will show the username for our post view:

We format the label to have text grey in color, and also we align it to the left side. We set the text property for our label to variable user. We then add the label to the post view.

Now let's create our final element for the post view. We will create a label that will contain the tweet message and format it to position properly in the post view:

Last but not the least, we add our complete post view to our row. Also, we give each row a class name because we might want to refer to them in future. We add our row to the "rowData" array every time the for loop is run. This is the final code for our for loop:

Let's continue by creating a table view that will show the rows that we have stored in the "rowData" array. We then add the table view to the window. The following code goes outside the for loop but inside the "loader.onload" function:

Now we must run the loadTweets() function at the end of our "tweets.js" file: 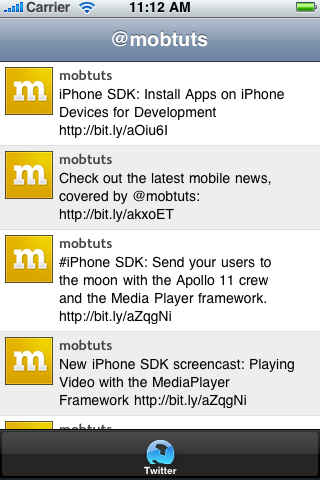 In this tutorial, we went over creating table views, tabs, and getting remote data. We also learned how to parse JSON and use it in our application.

You may go to these additional resources to expand your knowledge of the Appcelerator SDK and Titanium APIs:

Axit Patel
I am really interested in developing for mobile platforms and fiddling around with various programming languages. I began developing with Titanium after I read about it during the launch of Mobiletuts+ and I have found my niche. I am currently learning more about the Titanium APIs and am also learning to develop for iPhone with Objective C 2.0.
Weekly email summary