Twice a month, we revisit some of our readers’ favorite posts from throughout the history of Activetuts+. This tutorial was first published in June, 2009.

In this tutorial we'll create a quad run cycle. The animation will be created using simple lines. Along the way we'll cover a bit of work flow and animation theory, then near the end we'll use Motion Tween and ActionScript to move the animal across the screen.

Let's take a look at the final animation we're aiming for:

First decide what you want to animate (since different animals move in different ways). I'm going to animate a generic feline, so it'll move in a similar to a lion, cheetah, tiger, etc.

I often study references if I don't know how the subject moves. 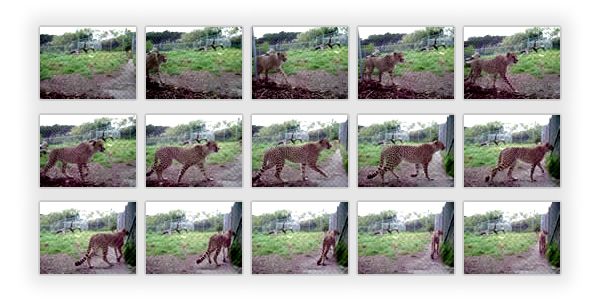 Here are some sites/books that I used:

It's helpful to understand the anatomy of the animal, this way you can better visualize what is actually moving underneath the skin.

Here are a few books on animal anatomy:

Once you've spent enough time analyzing and studying the references, it's time to do some drawing. I normally prefer to do some planning on paper first, though some people prefer to go straight onto the computer and start animating. It doesn't really matter which method you choose, just as long as it works for you.

By the way, you don't have to be a great artist to draw. Simple lines are good enough, as long as you can understand your own drawings. Usually I'll draw the important poses that I'd like to see in the animation.

Let's get started in Flash... 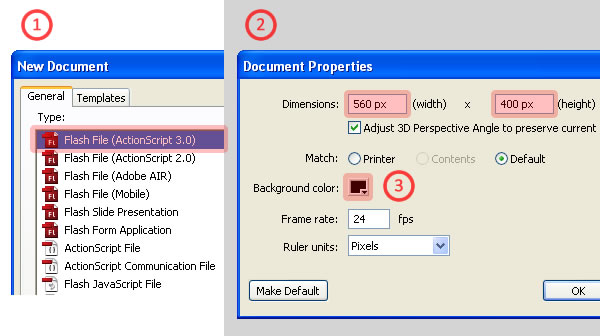 Change the dimensions and colors to suit your needs.

Then lock the "actions" layer since it'll only contain ActionScript code.

The fps for web animation varies quite a bit. All the way from 4 ~ 48fps. I'll be animating at 24fps.

Here are some other standards...

To alter the fps, simply change it at the bottom of the timeline, or go to Modify > Document.

There are many ways to animate in Flash, however I'll animate in a more traditional style whereby I'll draw each pose of the animation. I'll be using the "Pencil Tool" to draw. For the "Pencil Mode", I've selected the "Smooth" setting which means Flash will smooth out the lines as I draw.

First select the "ground" layer and draw a straight line to represent the ground. Then lock the layer. The ground has a white (#FFFFFF) stroke colour and a stroke weight of 3. 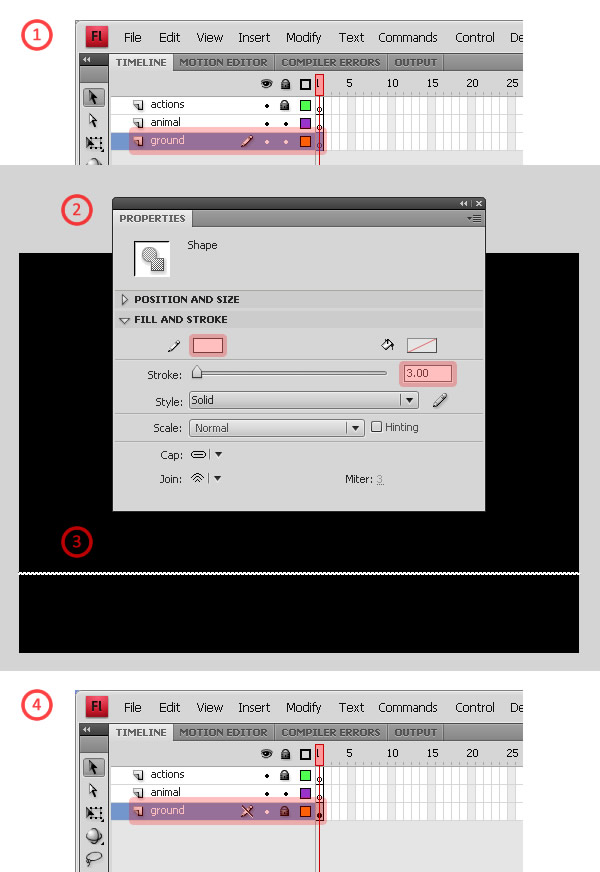 Go into the "animal" layer and start drawing the important poses. Generally they are the contacts and extreme poses. For the animal poses I've used a stroke weight of 5. Now, if you had planned this out in advance, you can simply redraw it all in Flash. If you want, you can also scan in your drawings and trace over them.

Note: You may want to look a steps 15 ~ 21 before you start animating.

Here are the poses I've drawn so far. 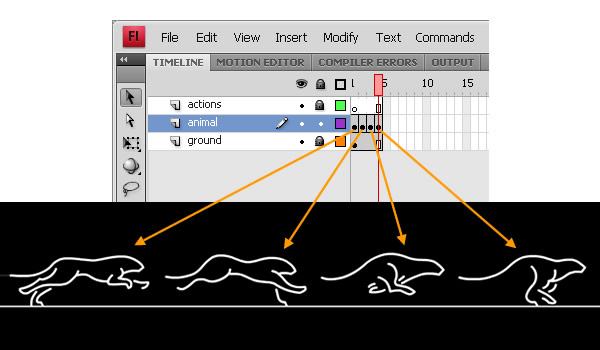 To extend the amount of frames for the "ground" layer, right-click the fourth frame and select "Insert Frame". This works even if the layer is "locked".

The small black dot on each frame indicates a "Keyframe" in Flash. To create a keyframe, right-click a frame and select "Insert Keyframe" or go to Insert > Timeline > Keyframe.

It's highly likely that you'll want to make changes after drawing a pose. Simply select the "Selection Tool" then and move the mouse close to the line you want to modify. When the icon on the bottom right of the mouse changes to a "curve", click and drag the line.

Note: Feel free to readjust the timing in order to get the animation working as a whole.

We can even make it smoother by adding more inbetweens.

When animating, I find it useful to use the "Onion Skin" and "Onion Skin Outlines". These tools can show the contents for a range of frames, before and after the current frame. You can also increase or decrease the number of frames by dragging the circles on each end. 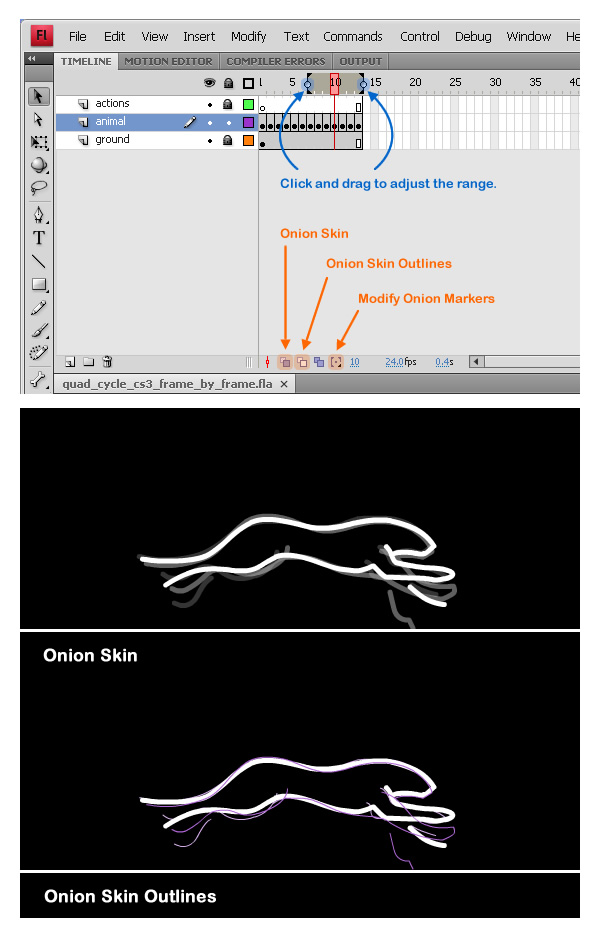 Some of you may find animation easy while others may not. I've therefore provided some tips which will hopefully help you in the process.

Generally, animation cycles move at a constant speed. Thus when animating the legs, make sure that the difference between the distance of each foot (between the frames) are approximately the same. If not, the feet may look like they're sliding.

Now let's move the animation cycle across the screen. First, though, we'll need to convert the frames into a "Movie Clip". To convert frames on the main timeline to a Movie Clip:

You should now be on the "animal run cycle" timeline. Right-click the first frame and select "Paste Frames". 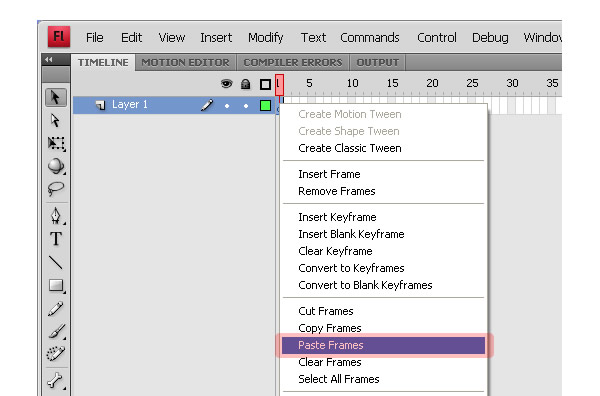 Now go back to the main timeline by clicking the scene name (beneath the timeline). Then clear all the frames on the "animal" layer and drag "animal run cycle" from the library onto the stage.

Using Motion Tween we can move the animal across the stage so it seems like it's running across the screen. The distance you want to move for each frame should be equal to the difference between the position for the planted foot (between the frames). 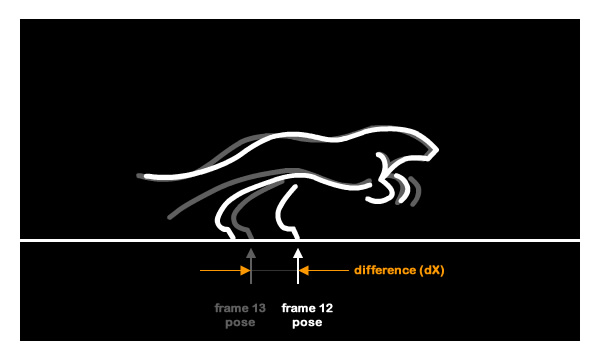 We'll refer to the "difference" as "dX". Here is a formula which finds the "number of frames" given that you know the initial and final positions.

= 57 frames (rounded to the nearest integer) 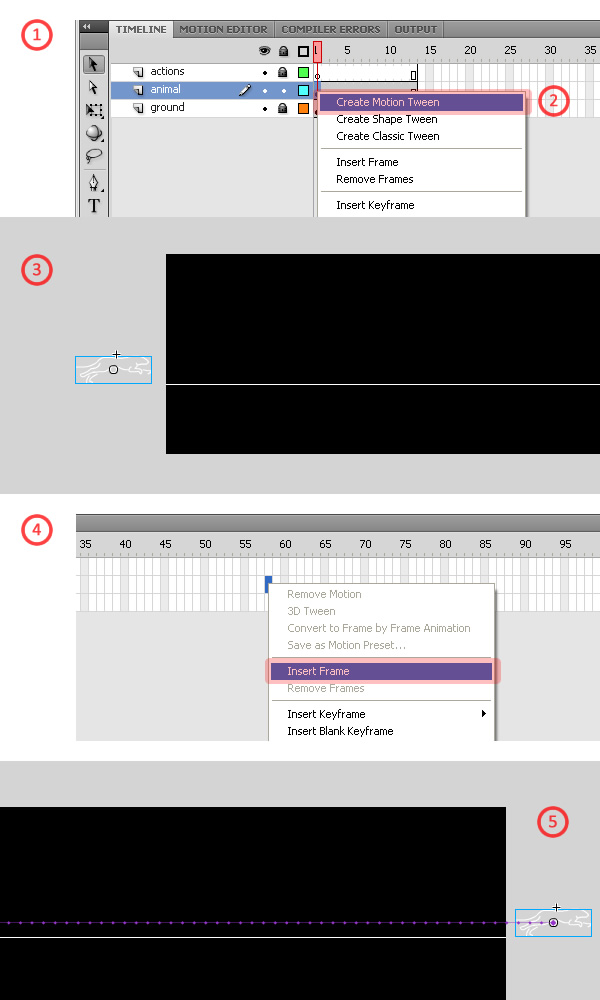 It's easier to move the animal using ActionScript since you don't need to worry about the formula and all you need to know is dX.

First make sure you have an instance of the "animal run cycle" on the stage. If not, go to the library panel and drag one out. Give it an instance name "animal_mc", then move the animal off screen to the left. Then select frame 1 in the "Action" panel and add the following code:

Step 21: The Other Direction

Let's say that you wanted the animal to move the other way (right to left). Select "animal_mc" and go to Modify > Transform > Flip Horizontal.

Here is the new ActionScript code:

Thank you for reading this tutorial and I hope you have fun animating!