The new Fragment API for Android, introduced in Android 3.0, allows for easier dynamic user interfaces. In this tutorial, learn how to convert a two-screen ListView to WebView workflow into a single screen workflow designed for large screens, such as those found on tablets.

Certain aspects of applications or techniques used in this tutorial have changed since it was originally published. This might make it a little difficult to follow along. We'd recommend looking at these more recent tutorials on the same topic:

The pacing of this tutorial is going to be faster than some of our beginner tutorials; you may have to review some of the other Android tutorials on this site or even in the Android SDK reference if you are unfamiliar with any of the basic Android concepts and classes discussed in this tutorial. The final sample code that accompanies this tutorial is available for download as open-source from the Google code hosting.

The following figure illustrates the existing workflow of our Mobiletuts+ article reader app (the ListView tutorial) before a Fragment design was considered and applied: 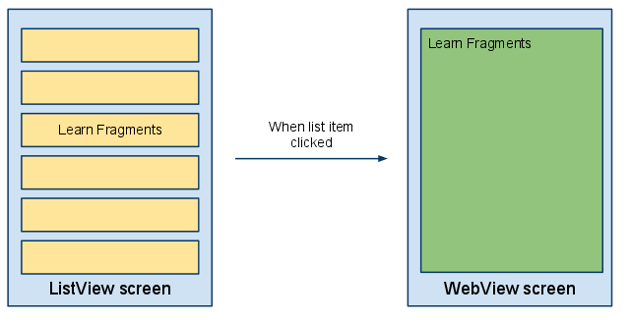 This workflow works fine on a relatively small phone screen. However, on a large screen, like the 10" screen of the Motorola Xoom, and there's a lot of wasted space on the ListView screen. The WebView screen looks fine, if a bit boring.

This is where Fragments come into play: on larger screens, we could provide a more effective user interface if we could display the ListView on the same screen as the WebView. When the user clicks a specific ListView element in the lefthand “pane”, the WebView on the right-hand side updates to display the appropriate content. This type of workflow is frequently used in email or document feed readers. The following figure illustrates just such a redesign:

Step 2: Converting to a Fragments-Based Design

Now that we know how the new screen workflow will be designed, we also know that the two current activities will need to be converted to fragments. We'll do the conversion in several steps. The first step involves leaving the screens visually unchanged, but modifying each screen to use a fragment. One fragment will contain the current ListView and another will contain the WebView. Then we'll switch to a single screen implementation, which involves modifying the messaging between the ListView and WebView activities-turned-fragments.

First, though, change the Project Build Target of your application to Android 3.0. To do this from within Eclipse, right-click on the project and choose Properties. Navigate to the Android section and check the checkbox next to Android 3.0. We're not using any Google APIs, so the Android Open Source Project version is sufficient. Then click the OK button.

Now you'll have access to the new APIs, including the Fragments API.

Note: In a future tutorial, we'll talk about using the new compatibility layer to enable technologies like the Fragment API to work on earlier versions of Android. For now, though, they will require a device with Android 3.0, Honeycomb.

The TutViewerFragment class is a little simpler. We use the fact that we know (for now) that the fragment is running under the same activity it used to and grab the intent data directly from within the Fragment class. Add an override method for the onCreateView() method. This methodshould now look like this:

The ability to access the activity instance directly is useful, but will create a problem later on. What if this fragment is on the screen with the list fragment? In that scenario, there will be no launching Intent to get the URL from. Similarly, in TutListFragment, we launch a new Activity directly whenever the user clicks an item in the list. What if the TutViewFragment existed within the same activity? If so, launching a new activity would make no sense.We'll return to resolve these issues later in this tutorial.

Now create a new layout file called tutlist_fragment.xml to represent the Fragment containing the list of articles. A Fragment layout resource uses the tag and references the Fragment class you created.

Also, of note, the TutListActivity should inherit from the Activity class, not ListActivity.

The TutViewerActivity class requires a similar change. Its onCreate() method should now look like this:

Try running the application now. You'll note that it does exactly what it used to do. Not very exciting yet, is it? However, the entire user interface is now run using fragments. This will allow the next changes you need to make to go smoothly as we add a new layout to combine the two fragments for larger displays to show to the user on a single screen. However, as you may have noticed, the communication between fragments is handled identically to how we communicate between activities. In fact, we used the knowledge that the activity each fragment was paired with remained unchanged. This will not be the case when we have a single activity that contains and manages both fragments. Let's fix this first.

Step 7: Changing the Communication for TutListFragment

As you learned in Step 3, launching an activity directly from the TutListFragment object doesn't make sense any longer. The WebView UI may, in fact, be part of the same activity as the List—that’s our plan anyway for larger screens. In that case, we just want to update the URL of the WebView in the second fragment.

To make this change, we need to do several things. First, let's make the fragments independent of the activity in which they reside. To do this, add a listener interface to the TutListFragment class, as such:

And then trigger it by updating the onListItemClickListener() method as follows:

Next, have the TutListActivity class implement the OnTutSelectedListener interface, like this:

So now we have the functionality split up between the fragment, which handles the user interface actions, and the activity, which can be a controller, passing the data on to the next activity. We'll modify the onTutSelected() method later to decide whether or not to launch a new Activity instance or update the existing fragment instance.

Step 8: Changing the Communication for TutViewerFragment

Now let’s move our attention to the TutViewerFragment class, which needs to be updated as well. Instead of querying the launch intent to find out which URL to load, the fragment will wait to be told what URL to load. In this way, we can update the WebView directly and not recreate the fragment with each load.

Next, remove all functionality from the onCreateView() method, except the inflate() call. Over in the TutViewerActivity class, add the functionality back to retrieve the Intent and then call the updateUrl() method, like so:

At this point, the application behavior remains unchanged. The fragments, however, can now exist within the same Activity or separate ones without further code changes.

This will divide the screen horizontally between both fragments.

Now we can add some simple logic to the application to choose between launching a new activity (the two screen workflow) and updating an existing fragment (the one screen workflow).

To do this, update the onTutSelected() method of the TutListActivity class as follows:

All this does is grab the fragment and check to see if it's part of the existing layout for the Activity. If not, the viewer activity is launched, otherwise the existing fragment is updated instead.

At this point, the application will now function in two different modes: portrait is unchanged, while landscape displays the ListView to the left of the WebView. There are several improvements that could be made at this point, but they are of the tweaking, optimizing, and nit-picking variety and mostly for polish. For instance, if you are in portrait WebView mode and rotate the screen, the result is still just the WebView screen. You have to press back to get to the dual view. Polishing is beyond the scope of this tutorial, but you can see how, with the judicisious use of layouts and a little bit of activity logic, you can achieve powerful but flexible screen workflows for a variety of screens and devices.