The Android SDK includes a simple editable text control for use within your layouts: EditText (android.widget.EditText). A good example of EditText control usage would be to collect form input, like "Enter a Name:" or "Enter a Password:".

Figure 1 shows an example of a screen with many different EditText controls displayed on it.

Step 2: Adding a EditText Control to a Layout

EditText controls are usually included as part of your Activity’s layout resource file. For example, to add a EditText control to the main.xml layout resource associated with your application, you must edit the layout file. You can do this within Eclipse using the Layout Resource designer, or by editing the XML directly. Controls can also be created programmatically and added to your screen at runtime. Simply create a EditText control (android.widget.EditText) and add it to your layout within your Activity.

To configure how the EditText control looks and behaves, adjust the control’s attributes by selecting the control (either in the Outline tab or the Preview window) and changing its attributes, as shown the Properties Tab. You can also edit the XML directly.

Here’s what the XML definition for a very basic EditText control looks like:

Specific attributes of EditText controls you will want to be aware of:

Let’s discuss some of the most common attributes for EditText controls.

Step 3: Retrieving the Value of an EditText Control Programmatically

You normally want to retrieve the contents of EditText, as well as other form controls at a specific event. Often, this sort of information gathering is triggered by the user pressing a button (like OK or Submit), or hitting the Back button.

However, you can monitor controls like EditText more closely if you so desire by using the typical View control listeners.

1. When a user clicks on the control. In this case, register a listener using the setOnClickListener() method.

1. When a user long-clicks on the control. In this case, register a listener using the setOnLongClickListener() method.

1. When a user presses a key within the control. In this case, register a listener using the setOnKeyListener() method.

1. When a user changes focus to or from the control. In this case, register a listener using the setOnFocusChangedListener() method.

Let’s look at the focus changing example. When the control first gets focus, you’ll see a focus changed event. Once the user moves focus away from this control, you’ll see it again. Here’s an example of how to monitor the contents of an EditText control on focus changes from within your Activity class:

By default, any text contents within an EditText control is displayed as plain text. The default software keyboard is used, for inputting plain text. However, by setting one simple attribute called inputType, all you can facilitate input of different types of information, like phone numbers and passwords. In XML, this property would appear within your EditText control as:

There are a variety of different input types for different purposes. The phone inputType will restrict the user to numbers; the software keyboard will provide numeric options, as shown in Figure 2. 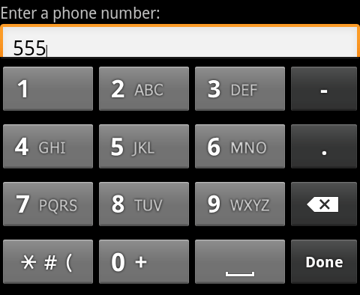 Retrieving this information from the control is performed exactly the same as if you were collecting basic text, using the getText() method.

Generally speaking, EditText controls are used for collecting input, not displaying it. That said, you can always set the value of an EditText control using the setText() method, just as you would a regular TextView control.

Figure 4 shows two EditText controls. The first has a hint set to prompt the user. The second sets the value (and text color - red) of the control. This is not a hint, but the actual VALUE set within the control.

Although the sentences option is likely the most popular, you might want to capitalize each word for input like names and each character for two letter state abbreviations.

Similarly, you can limit the characters that can be entered into a field using the digits attribute. For example, you might limit a number field to zeros and ones like this:

By default the cursor displays in an EditText during input. You can disable the cursor using the cursorVisible attribute, like so:

We’ve only scratched the surface of what you can do with an EditText control. EditText controls are commonly used in Android application user interfaces to gather textual input from the user. In this tutorial, you learned how to create Android EditText controls and customize them in a variety of simple ways. One of the most powerful features of EditText controls is the ability to set its inputType in order to collect text, numbers, email addresses, and other information from the user. These attributes can be mixed and matched to allow for very flexible input controls on the screen.