The Hierarchy Viewer is a visual tool that can be used to inspect your application user interfaces in ways that allow you to identify and improve your layout designs.

We’ve whipped up a very simple application with one screen. The screen uses a vertical LinearLayout control with two “cells”: A TextView control that says “Safe” and a FrameLayout which contains two ImageView controls. Two underlying drawable graphics are used: a bowl and a fish. Figure 1 shows our simple Fishbowl app screen:

Step 1: Inspect the View Hierarchy of the Screen

Let’s begin by looking at the general picture of what’s going on with the screen by launching the Hierarchy Viewer and loading the View Hierarchy of the screen. Figure 2 shows what the screen might look like: 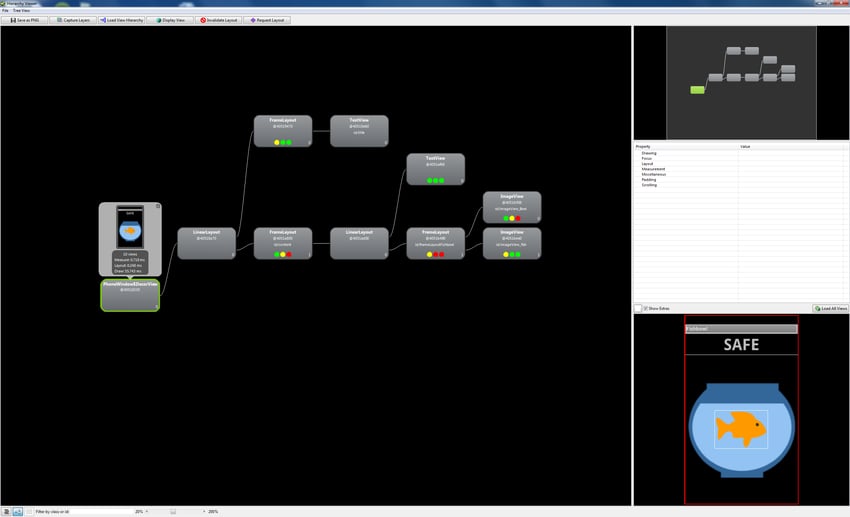 Notice how each View within your application has a set of three colored dots (Figure 3). 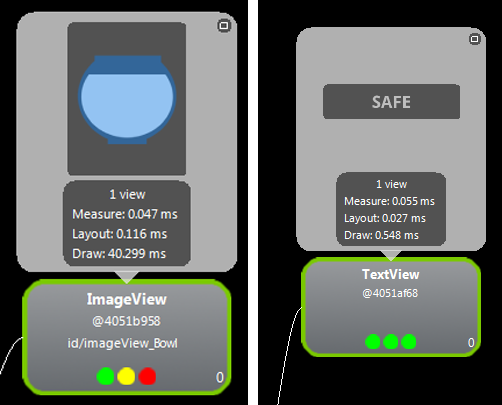 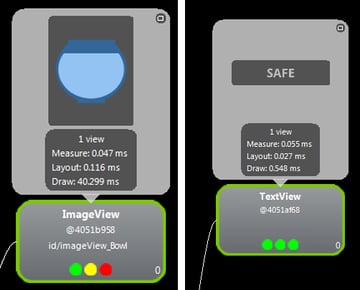 These dots are performance indicators:

These indicators can be red, yellow, or green and represent how each view renders in relation to other views in the tree. They are not a strict representation of a bad or good view, per se.

When you click on a specific view within the Tree, you will also see the actual performance times upon which these indicators are based. These times include the time of rendering all child controls. For example, the rendering times for the FrameLayout will contain the rendering times of its two child ImageView controls.

Once your user interface has settled and you’ve addressed the obvious culprits to slowing down your UI rendering performance, you have to start looking at the performance statistics more closely. You’ve streamlined the underlying resources as much as possible, so you’ll want to switch your focus on the rendering times as opposed to the indicators.

Optimizing user interface performance means optimizing all its layouts and view controls so that they are as fast as they can be. Your job as a performance tuner is to make those reported rendering times for each view in your hierarchy as fast as possible. To do this, it’s best to take a baseline. I like to print out the hierarchy tree, making a note of each control’s rendering times, and then work on addressing each control’s weak spots and bringing those times down as low as possible.

The performance indicators help you address the obvious culprits to slowing down your UI rendering performance by showing you your lazy views that take the longest to render. But what can you do with this information?

Well, one easy thing to do is look for what’s working and what’s not and prioritize your hunt accordingly. In our example, the TextView control is loading very quickly (all greens). No point in scrutinizing that view too closely right away. However, the FrameLayout containing the fish and bowl ImageView controls is another story. Those red dots cry out for a little investigation.

So what can we do with ImageView controls to make them render faster? Well, here are a couple of ideas:

When looking at rendering times, consider also what you're drawing and what the user gets out of it. For example, a rendering time of 40ms for a single image is unacceptable for any sort of smooth animation – the image could only be rendered 25 times a second, not smooth enough and not leaving any time for any other processing or rendering.

When you’re looking at how to optimize your layouts (LinearLayout, FrameLayout, RelativeLayout, and so on), we’ve got a couple pieces of advice for you:

In terms of UI optimization in general, here are a few more tips:

Each screen is different and has different performance and responsiveness requirements and characteristics. This concludes our brief discussion of how to use the Hierarchy Viewer application to profile and optimize your application user interfaces. The Hierarchy Viewer is a powerful tool for visualizing and inspecting the components that make up your Android app user interfaces. It can be used to help streamline layout design and determine where your UI performance bottlenecks are. With the rendering information you can derive from the Hierarchy Viewer tool, you can establish a baseline and then tweak your user interface components to make them leaner, meaner, and faster to load, resulting in an improved experience for users.

As always, we look forward to your feedback.