This quick tip shows you how to create and use string resources as format strings. You will achieve this by creating and configuring the appropriate string resources in XML and using them programmatically to supply the various typed parameters.

Begin by creating an Android project. If you’d like to just follow along, you can find a sample project with code for formatting strings.

Step 2: Why Use Format Strings?

Format strings are a convenient way to build up one string that has variable content. This is best illustrated by example. In homage to the popular video game Oregon Trail, let’s look at an infamous message players inevitably saw while dragging their family across the Midwest:

The number of pounds of game meat changes based upon how the player shoots. There are a number of ways (both good and bad) that developers might approach this problem. A developer might:

Sometimes, coming up with a generic string is the right answer—it’s simple and straightforward. Generally, this is the best approach when the information being relayed can be made generic without the application losing something. Other times, you need to communicate important and specific information to the user. In Oregon Trail, if you shot 2 pounds of meat, then you’d keep hunting (or starve), whereas, if you shot 1234 pounds of game, your wagon was maxed out anyway, so you’d likely choose to mosey along down the trail (with a full belly).

You might ask why the sandwich approach isn’t so great. First, using two strings clutters your resource files and makes them difficult to maintain. Secondly, when you go to internationalize your application, you may find that those two strings are no longer appropriate—it can get very complex if your string has more than one parameter, too. Brewing your own solution means introducing more code to maintain and assuming that you can do string manipulation better than the stock Java libraries can.

Better to use the standard methods for formatting strings and create a single string resource with parameters.

Format strings can have one parameter or many. Each parameter is numbered and typed. The parameter number is specified using % followed by the number of the parameter, which corresponds to the order in which the parameter values will be supplied programmatically. For example, the first parameter would be %1, the second %2, etc. The second item each parameter has is a type (think C-style printf()), specified by a $ and a letter specifying that type.

For example, a string would be $s; a number might be $d. Therefore, our string resource could be crafted as:

Now that you’ve created a proper format string, you can load it, format it, and display it to users. The following code loads the string resource, supplies the single numeric parameter and generates the completed string:

Let’s try another example. This time we’ll create two more format string resources, each with two parameters. In Oregon Trail, the player’s family often got sick and sometimes died. The two messages players often saw went something like this:

The following code loads the string resources, supplies the parameters, and generates the completed strings: 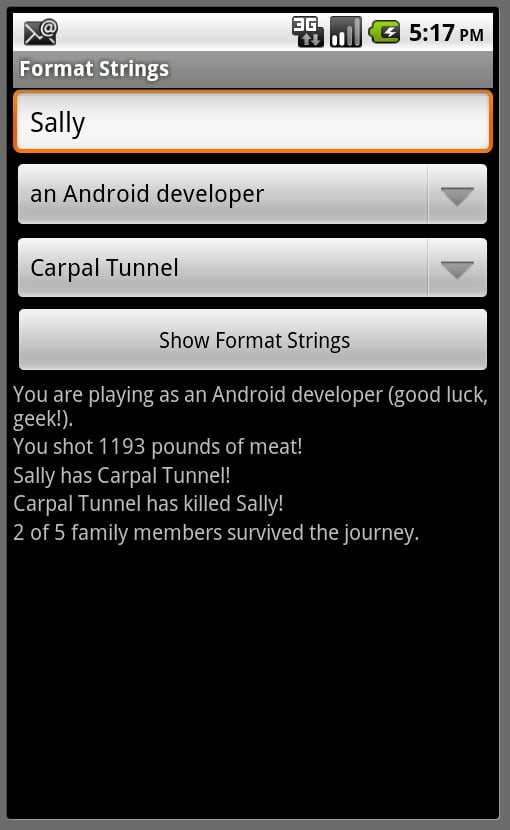 That makes it much easier on the developer. Also, in terms of string translation, many of the string parameters get jumbled up in different languages anyway.

In this quick tip you learned how to use format strings as Android string resources. Format strings allow for flexible and maintainable application assets.