A Closer Look At the Blueprint CSS Framework

Blueprint is a CSS framework that can save you time and headaches when working on any project that involves HTML and CSS, whether it be with Rails, PHP, or just laying out an HTML page. In this tutorial you will get a look at the inner workings of Blueprint and we'll take a look at demo application that uses Blueprint to get a better idea of how to use actually use the framework.

1. What is Blueprint CSS?

If you are like me, as in more of a developer than a designer, then you are familiar with the process of starting a new project and not knowing what to do with your CSS. You know that your design will likely change as the project goes on, but you want to have a nice looking design from the beginning. So you spend some time writing some CSS that works in Firefox and Safari, oh wait, don't forget IE, right, right. Then you write some HTML that you think you will use, and work at getting all of the spacing to look right. Great! Finished! Now, three days later, the requirements for your project have changed and you find yourself redesigning the layout again. Hmm...

Now, even if you are a rockstar designer who already has all this CSS stuff figured out, or if you aren't worried about how your layout will change over time because you are working from a PSD template or something, that doesn't mean that there is nothing to learn here. Blueprint can still provide you with some tools so you can...

Spend your time innovating, not replicating.

This is the motto advertised on

And I think that this is exactly what Blueprint accomplishes. Blueprint provides a solid foundation to build your project on top of. It does this by providing sensible defaults across all browsers, nice-looking default typography, a grid framework, nice-looking forms, and a print stylesheet built with printers in mind. Let's take a look at how Blueprint achieves this:

Does this mean that I have to include six different stylesheets?

No. Blueprint comes with three compressed stylesheets for your HTML pages, screen.css which contains #'s 1-3 & 6 from above, print.css, and ie.css. The reason that I outlined the different parts of the framework above is because the framework is modular, each of those pieces works independently of each other. The nice thing about this is that if you decide that one aspect of Blueprint, such as a grid layout, doesn't fit your project but you still want the benefits of reset.css and typography.css, you don't have to use the the grid but the other styles will still work.

3. Let's Build a Layout with Blueprint 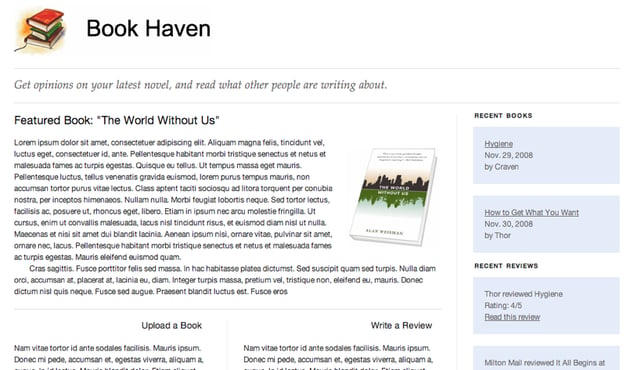 This site is an idea that I had kicking around in my brain so I thought I would bring it to life here. It's a site where people who like to write novels as a hobby can go to review novels from other hobby writers as well as upload their own to be reviewed.

I realize that all of you rockstar designers who stuck around at the start are now about to leave after taking a look at my design, but the interesting thing about this design is that I did not write any CSS for it. This design uses only Blueprint styles and while it's not the end of all designs, it provides a flexible, nice-looking design for my project. Since my design is likely change, Blueprint makes it easy to update my layout, and when my site is fully functional, I can think about adding some of my own styling to make things look prettier.

The head of the document

This is how a typical <head> tag should look when you are using Blueprint. You need to include the framework's CSS files, which consists of screen.css, print.css and ie.css.

which simply overwrite aspects of the framework or add new styles for you to use.

Lastly you should include your CSS file where you could overwrite styles from the framework and add your own styling to the page.

The most important thing to note about this code: your grid must be surrounded by a <div> with a class of 'container' otherwise it will not display as a grid. The <hr /> tags are used by Blueprint to separate sections of your page vertically. The 'alt' class is brought to you by the fancy-type plugin and provides a nice way to spice up some text (can be applied to any text element).

There is lots of important stuff in this code snippet! Let's start at the top with <div class="span-17 colborder">. This tag declares the largest outlined div on that page, the one that contains the Featured Book section as well as the two smaller sections below. The class 'span-17' relates to the Blueprint grid layout. It declares that the width of this div should span 17 of the 24 columns on the page. The other class being used, 'colborder', is short for column border and tells Blueprint to put a border to the right of this div between it and the sidebar.

Important: using the 'colborder' class actually takes up an entire column. Since our main div is using 17 columns (span-17), you would expect that the sidebar could occupy 7 columns (since 17 + 7 = 24, the number of columns on our page), but since the 'colborder' property takes up a column to itself, this leaves only 6 columns left for the sidebar div to occupy (17 + 1 + 6 = 24).

Before we get to the sidebar we need to look at those two smaller div's, the ones titled 'Upload a Book' and 'Write a Review'. This is actually one Blueprint grid nested another Blueprint grid. Since the inner grid is nested inside a div spanning 17 columns, the max width for this grid, instead of 24, is 17.

So, the first div has the classes 'span-8' and 'colborder', meaning it's width will span 8 columns and it will have a border to the right. The second div here has classes 'span-8' and 'last'. This is an important part of the Blueprint grid framework. The rightmost column in a grid must have use the 'last' class. This tells BP that this is the last column in this grid and it doesn't need to make space for any more. Notice how we had room for 17 columns to begin with, each of the divs spanned 8 columns and the 'colborder' property took up the last column (8 + 8 + 1 = 17).

OK, back to the sidebar. The sidebar div has classes of 'span-6' and 'last'. I'm sure you guys have caught on now to how these classes work. This sidebar completes the grid that the main span-17 div began. In case you didn't notice, the 'span-#' class can take any number between 1 and 24, unless you decide to use a bigger grid, in which case the 'span-#' class can take any number so long as the number is less than the total number of columns in your grid.

This is about the simplest HTML I could come up with to demonstrate the grid.

Let's look at a few more of the CSS classes that we used in the layout.

If you are not familiar with the CSS box model and don't know the difference between padding and margin, here is a a brief lesson. In CSS, padding adds space within the borders of the element and actually increases the size of the element. For example, if you have a table with borders and you add padding to that table, it will actually push the borders away from the table. Margin, on the other hand, adds space outside of the border and does not increase the size of the element. This may have the effect of push other elements away from the current one or moving the current element on the page. Here is a great image to demonstrate the CSS box model:

This tutorial intended to show you how Blueprint CSS can be used to lay the groundwork for your next project, or at least take some of the weight off of your shoulders around resets and typography. Also, if you are using Blueprint with Rails, check out their repository on Github as they have some features that allow you to easily integrate and configure Blueprint to work with your Rails project.

The best thing about Blueprint is that it's just CSS. It's all CSS. So if you are interested in Blueprint go check out the source and if you have any knowledge of CSS you should be able to understand how it all works. Blueprint also is not a very large code base, it probably has less CSS than most of us use on a typical project. You can even read the source in your browser over at the Blueprint repository on Github.

I'll leave you with a few resources on Blueprint:

HTML & CSSGeneralWeb DevelopmentCSS3Blueprint CSS Framework
Did you find this post useful?
Yes No
Would you like to provide feedback (optional)?
Cancel Submit
Want a weekly email summary?
Subscribe below and we’ll send you a weekly email summary of all new Code tutorials. Never miss out on learning about the next big thing.
Sign up

Jesse Storimer
I'm Jesse. I live in Ottawa, Canada. I'm currently interested in Rails and all things that make web development easier. I have a blog too.
Looking for something to help kick start your next project?
Envato Market has a range of items for sale to help get you started.