Web developers with social media savvy are in hot demand. Imagine what it would be like to promise your clients a web presence that is fully integrated with their Twitter strategy and makes it easier for their content to go viral on Twitter. Would be nice, no? Well -- why imagine? The tools for web developers to add a touch of Twitter to any site are out there and easy to use. Trust us -- your clients will love you for it!

There's no better time to start utilizing Twitter integration tools than right now. Here are 10 of the most useful ways to start turning your site readers (or your client's customer base) into Twitter followers, and vice versa.

If you're just getting started with wanting to integrate Twitter into your site, than simply adding the traditional Twitter widget to your site's sidebar is a great start. It's not sexy, but it's a great way to show your latest tweets on your website. It's an effective way to get readers involved into your Twitter updates, without taking up too much screen real estate.

Twitter widgets can be used with virtually any site or blog, including HTMl-only pages. While they may not require the most exciting development hack to incorporate Twitter into a website (copy + paste), simplicity is not a bad thing.

Twitter Buttons is a nifty little service that helps you quickly create a badge to promote your Twitter account. You can choose from over 40 different well-designed Twitter buttons, spanning different shapes and sizes. The service also allows you to automatically create the HTML needed to build the badge without any programming knowledge, not even a teensy bit. Easy peasy.

Thanks to Wordpress' dominance in the blog software world, many blog owners are using Alex King's excellent Twitter Tools to integrate Twitter into their blogs. Twitter tools is a Twitter Swiss Army knife for Wordpress, adding almost limitless functionality to an otherwise Twitter-less blog. The nifty plugin allows you to:

Twitter is a powerful promotional tool. Many influential Twitterers have thousands of followers, and an endorsement from one of the "Twitterati" could send a wave of traffic to your site. If you factor in that those followers might tweet to their followers, than you have a very viral social marketing tool.

TwitThis is a little button that you can place in your HTML or in your blog template to allow your readers to quickly and easily share what they're reading with their Twitter followers. Aside from an HTML button, users can also "tweet" their findings via a bookmarklet, and Wordpress users have a nifty plugin they can install as well.

TweetSuite is one of the most compelling uses of the Twitter API in a blog plugin. TweetSuite is a Wordpress plugin that furrows among the Twitter API and finds the tweets that reference the current page. It adds another aspect to commenting, showing more of the total conversation around the blog post. Aside from that, TweetSuite boasts some impressive functionality like a Retweet button and a "Tweet this" button (like the famed "Digg this" button).

TweetSuite is currently offered only for Wordpress blogs, but there is another solution for pulling Twitter comments across any platform: Chirrup. Chirrup allows you to display all of the references from Twitter on a given webpage (much like TweetSuite), except it does this by only adding a Javascript snippet. Chirrup is a PHP/Javascript program that has to be hosted locally, but only requires a tiny Javascript include to work on any page. This means that any static HTML page can now have a Twitter-based commenting system.

That's a lot of marketing potential for sites wanting to tap into Twitter.

Tweet This is a Wordpress plugin that has much of the same functionality as TwitThis, with a few more bells and whistles. Tweet This automatically shortens your website or blog post URL with a URL shortening service, and also allows you to easily configure the look and feel of the service, without having to dig around in the template code too much. It's a simple drop-in solution for Wordpress blogs, but a powerful way to help spread your content among readers on Twitter.

IntenseDebate is one of the best 3rd-party commenting systems on the web. The service is famous for its threaded comments, user system and rating, excellent design and ease of installation. Yet one of the most progressive features in IntenseDebate's deep feature set is the ability to notify Twitter when you've made a comment. Not only does this feature help the commenter showcase what he's yakking about online, it also gives the originating site some more attention on Twitter. 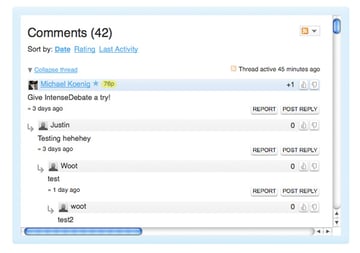 Prized for it's stellar email marketing features, Aweber has an excellent feature for any newsletter marketer: The ability to tweet the newsletter. The newsletter delivery service has actually created a way to convert RSS to Email to Tweet (if you can wrap your head around that).

There are many site owners who run incredibly successful email newsletters, so this feature is very useful for those wanting to bring that extra bit of awareness to a newsletter.

Last, but certainly not least, is a pioneer of website and Twitter integration: Twitterfeed. Twitterfeed allows you to automatically insert tweets into your Twitter stream from any RSS feed. Many blogs utilize this functionality to let their Twitter followers know when new content is available. You can tailor the format of the generated tweets, and it's a great way to keep your Twitter followers engaged on your blog.