Recently, a friend of mine gave me a call asking if I could build him a blog in next to no time. Challenged, I accepted and worked out a way to have him a functional blog so that he could write pages and posts. And, even better for him, do it in just 15 minutes. Here's how you can do the same.

Thanks to open source tools, you no longer have to spend hours getting in a fuddle with grid systems, responsive design patterns, browser resets or complicated file structures (WordPress themes). Luckily, we've now got the ability to 'outsource' the hard, boring work to other people.

Whether you're looking for a quick starting point or just want to be able to do this 15 minute blog with me, it's handy to use the following.

Step 2 Include All Your Files

After you've downloaded all of the above, make sure that you've got them in the same directory and you've decided on any of the extra parts of ZURB that you might want to use (for a list of the extras, see here).

Once you've got a complete theme directory, open up your functions.php and reference the vital stylesheets like this:

Then you're good to start using the files that you just included.

Step 3 It's Mostly in Your Head

For a basic structure, you really only need to open up your header.php. That's great news for developing quickly.

We're going for two columns so I'm just going to have the site's header as the left column and the site's content as the right column. ZURB Foundation provides us with a brilliant way of making a layout quickly. We just need to put our divs/sections/headers into rows of twelve columns by adding classes to the constituent parts.

In our example, I've assigned a width of four columns to my header by adding a class of 'four columns' to the <header> element, and a width of eight columns (8+4=12) to the content area that's going to form my right column like this:

That will give you a basic two column grid which is already responsive in its structure.

After you've got that structure, it's a case of house cleaning. I did the following but you don't have to:

That's that! You've got a working blog template that you can get 0 to online in 15 minutes. How good is that?

Don't forget that this is only a basic site - you should go on and add your own styles and flair to it afterwards too, unless you're looking for something that's absolutely basic, of course. 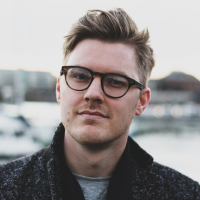 Marc Thomas
Marc Thomas is a journalist from Wales, UK. He edits Plastik Magazine – a site about creative culture in Cardiff. You can find his personal website at http://thatisjustawesome.com
Weekly email summary