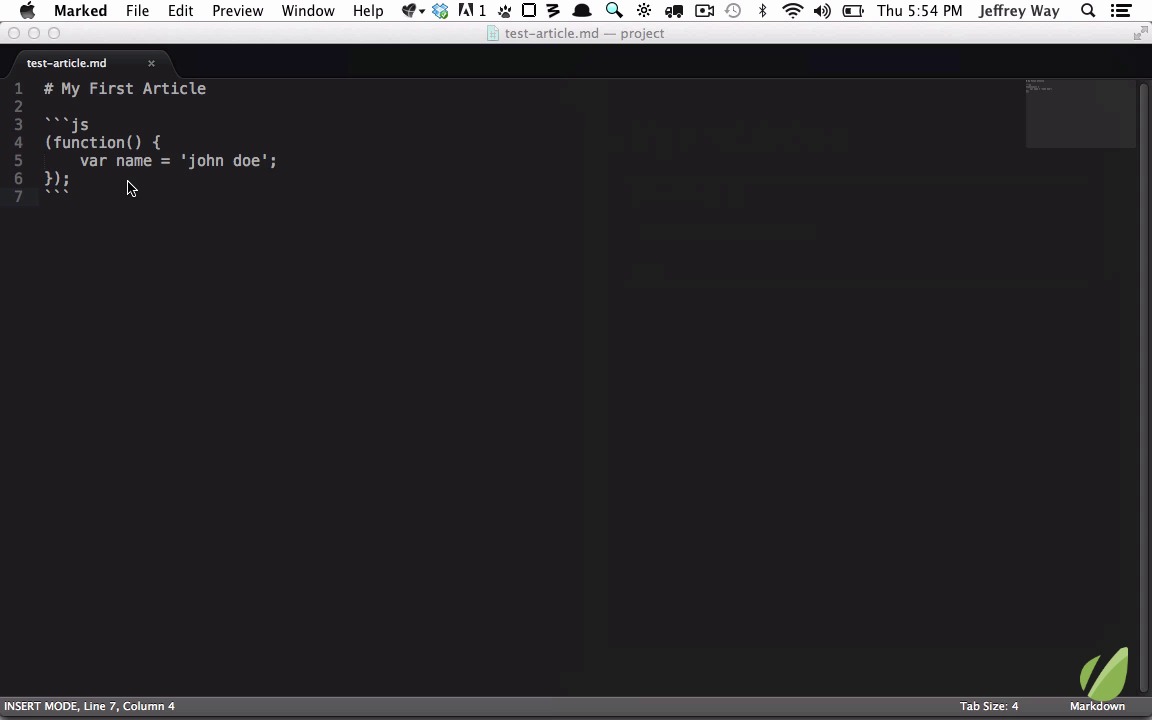 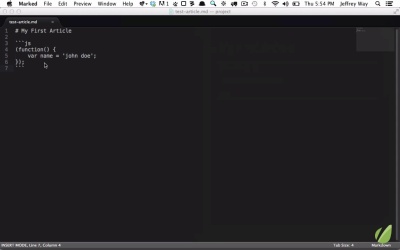 5.5 Sublime and Markdown with Marked

For Mac users, the Marked app is a great one. If we use the app's provided build script for Sublime, we end up with a robust system for writing in Markdown directly within Sublime.

The Marked Bonus Pack plugin is only available for Sublime Text 2. Try the Marked App Menu plugin instead, available through Package Control.

5.5 Sublime and Markdown with Marked

Sorry guys, this lesson is specifically for, mac users. So one of my favorite markdown tools is an app called marked. And this is a little bit different in that, it's not an editor specifically. It's only a viewer, and that way, you can use whichever editor you most prefer. Now, it's not free, but it's only $3.99 and I'll show you in this lesson how we can use it with sublime text and it can be pretty cool. So, the first step of course, is to download it. Once you have downloaded it and you open it up. You're really not going to see anything here. You'll find you can't create a new file. That's not what it's for. Instead, you open a file. So, why don't we open this sample file, test-article. Now you'll see I can't edit this, it's just a viewer. But it does offer some nice conveniences. First you can view a number of different themes using Apple, one, two, three, four, five, six, et cetera. And it also has the ability to display code snippets. So let's go into sublime text and I'm gonna have this setting where we have keep window on top. And now even when I'm working in my editor this will always float above so we can make changes and as I save it Marked will automatically update. So my first article, save and now then now we'll update in the sidebar. So let's add some GitHub style comments, something like this our name equals John Doe. Now you'll see that we do have GitHub style code highlighting, great. So this is really good when creating, for example, your GitHub documentation. But one thing that stinks is, maybe we're editing this file in Sublime, but we have to then go over to Marked, and then open the file. Well there are some extras where we can do this instantly with sublime text. If I go back to the marked website and I click on Extras, there is a bonus pack here that we can download. So we'll just go ahead and grab that right now, and if I unzip this and open it up. We have a handful of tools. But the one that we're obviously interested in in Sublime. So this is a custom Sublime build file. So we need to move this into our packages directory. Let's do it this time directly from the desktop by going to go, go to folder and we'll go into Library&gt;Application Support&gt;Sublime text 2&gt;packages&gt; User, and now I will paste that in. Great. So I can delete these, and now, if I go back to Sublime and I go to Tools&gt; Build System, you'll see that for mark down files, we now have this new build. So now, if I hit build by pressing CMD+B, or whatever your editor says for build under tools. That will automatically open the file in Marked. Great, so let's put this to the test. We have our mark down file. We're going to bring this into Sublime Text. Next, we're going to make some changes. And when we wanna view this, we hit build. That opens it up in Marked. It's going to float over the editor, and then, I can continue on. And every single time I save, Marked is going to be updated. So yeah, it's a simple convenience, but I use it all the time. And I recommend that you do too.