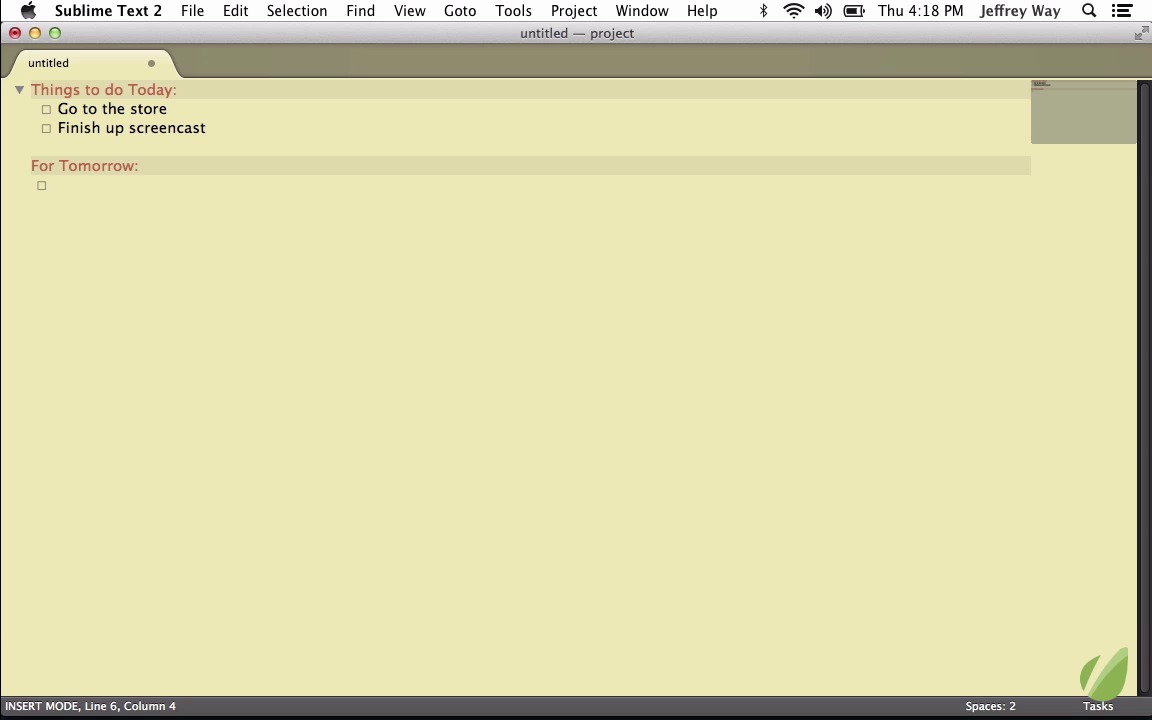 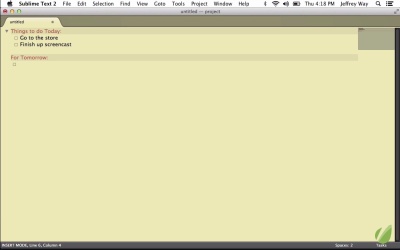 If the idea of managing your todo lists directly within Sublime appeals to you, the PlainTasks plugin is for you!

I bet you didn't know that we can more or less reproduce the popular task paper app directly in Sublime text 2. Its a recent plugin at the time of this recording which is September 2012. And it was created by this GitHub user Aziz and its called Plain Tasks. So let's try it out. Once again, I will copy this path. Switch over to the terminal. Next I will get clone and I'm gonna call this Plain Tasks. Great. Now that's available to us. If I switch it back to my editor now to make that active, I can bring up the control palette, Shift CMD+P. And if I type task now we have this new option create a new document. So by itself it doesn't seem like much but I found this to be actually fairly helpful. So let me get you an example of some things we can do. So we will begin with a heading. We'll call it Today. And as long as I end it with a colon that's going to set it up as a blog heading. I don't add that, that won't register. So maybe Things to do Today. Next if I go into a new line we can either type a to-do item. Go to the store. And then hit CMD+Enter or CTRL+Enter on Windows. And now that will create them. Alternatively we can press CMD or CTRL+I and that will automatically create a new one. Finish up screen cast. Now we'll do a new heading for tomorrow. CMD+I to create a new task, host video. Similar to task paper we can also set tags, so I can do something like at personal that will set up those necessary tags. This will say work, this one as well. Next if we want to create dividers, perhaps you need a little bit more room between these two projects. You can type dash, dash, tab and that will create a divider for you like so. So what about finishing a task. Well, we can click on it and I can hit Cmd+D. Think D for done. If you do it again that's going to be a toggle effect. So that un-completes it, that sets it to done. Maybe we've also posted the video, Cmd or Ctrl+D. And then if we wanna archive all of the ones that we've finished, we can hit Shift+Cmd+A. And now that will move all of those to an archive section, and we can start again. Now let me undo that by pressing CTRL+Z, and I will toggle this once again. If we want to adjust the order, we can use the standard spline text helper CTRL, CMD+A, and that will allow me to move these up and down like so. So, for example, if I realized I need to go to the store tomorrow. Ctrl-Cmd-Down, and bring that down like so. So let's save this as this-week, and now, whenever I close that, I can immediately go back to my to-dos by clicking on it, update my item, save it, and then we're done and we're back to coding.