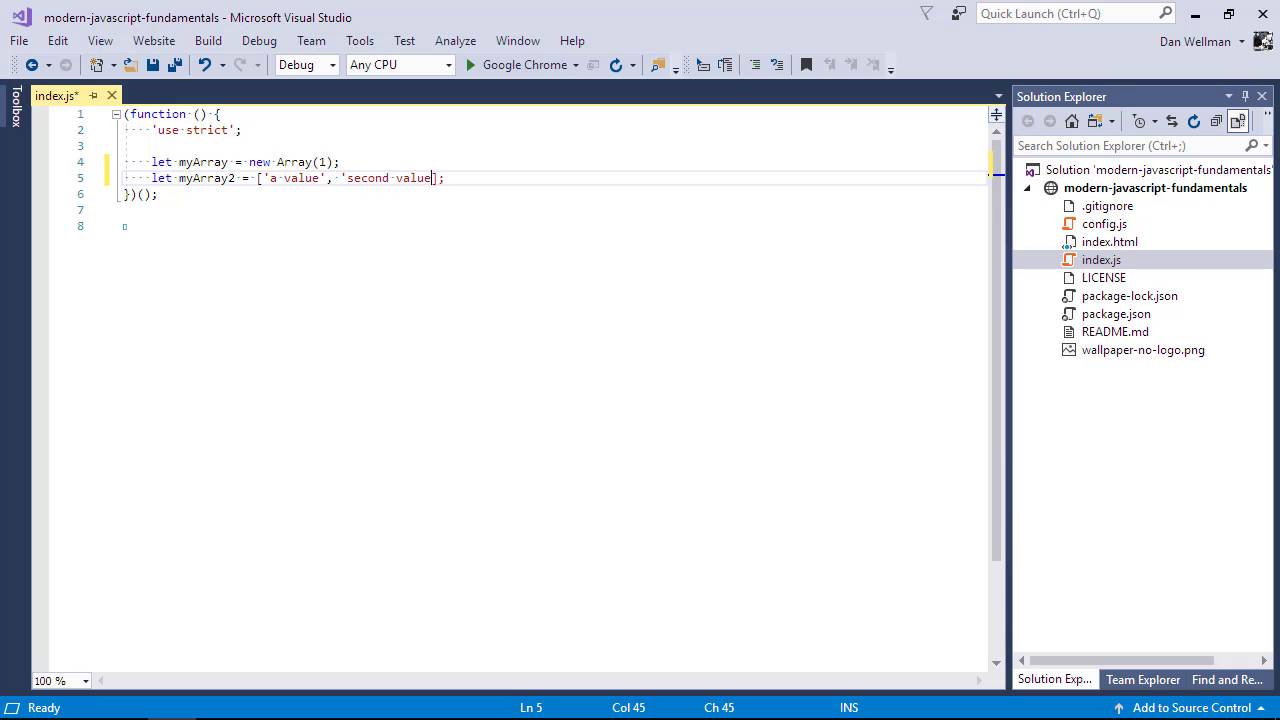 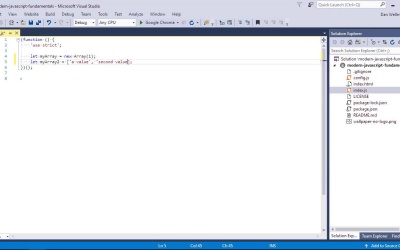 Arrays are one of the most commonly used structures for storing data, and you will use them all the time. In this lesson we’ll focus on the basics: what arrays are and how they can be created, accessed, and modified.

Hi, folks. Let's start Section 3 by looking at arrays. Arrays are very commonly used in JavaScript and have a rich and extensive API for manipulating them. We'll look at these APIs later in the course. So an array is a single object which can contain multiple values. A variable is a container for a single value, but an array is a container for multiple values. As I mentioned before, we can create arrays in a number of different ways. There is the array constructor, but we can also create literal arrays. Now I mentioned earlier that it was encouraged to use the literal form. Let's just look at why. So we saw earlier that there is an array constructor. Let's just remind ourselves what that looks like. The array constructor receives an argument, and that argument is the number of items that we want the array to have. So in this case, we have specified that we want to create an array with one item in it. So at this point, the myArray variable contains an array which has one value. Now the constructor doesn't let us specify what that value is. And so, when we use the array constructor, the values inside the array will be initialized as undefined. This is why it is recommended to use the literal form. In this case, we’ve also created a new array that has a single value, but instead of that value being undefined, we’ve given it a string value. This is why it is recommended to always create arrays using the array literal form rather than the array constructor to avoid having an array full of undefined values. Arrays do have an upper limit on the maximum number of elements that we can store in them. But this limit is so high that for all intents and purposes, we can assume that they have an unlimited capacity. To add multiple items to an array, we just separate them with commas. Arrays use numerical indexes to address the elements within them. And these indexes always start at zero. So the first element in the array is at index zero, the second is at index one, and so on and so forth. To access an individual array element, we also use square brackets and specify the index of the element that we would like to get. So by specifying the index 1, we will get access to the second element in the array. An array's length is always one greater than the index of its last element. So if we want to get the last element in an array and we don't know how many elements there are inside it, we can do this. In this case, we get the same value that we got before, but if there were more elements inside the array, this would give us the last one. We don't have to know how many items there are in the array in order to add new items to it. For example, In this case, the array will have 100 values, but all of the values in between the first two values that we gave the array when we declared it, and the one-hundredth item that we just added. All of the values in between those values will undefined. They'll still exist, but they'll be undefined. So in these lesson we've learned some of the basics of arrays in JavaScript. We've seen that we should declare arrays using the literal syntax. And we've seen we can access individual elements with in an array using square brackets and the numerical index of the element that we want to get. We've also seen that we can add new items to the array by specifying the index that we'd like the new value to be inserted at and using the assignment operator. Arrays are capable of a lot more functionality, and we'll come back and look at them in much more detail later in the course. In the next lesson, we can take a look at another fundamental concept of JavaScript, objects. Thanks for watching.