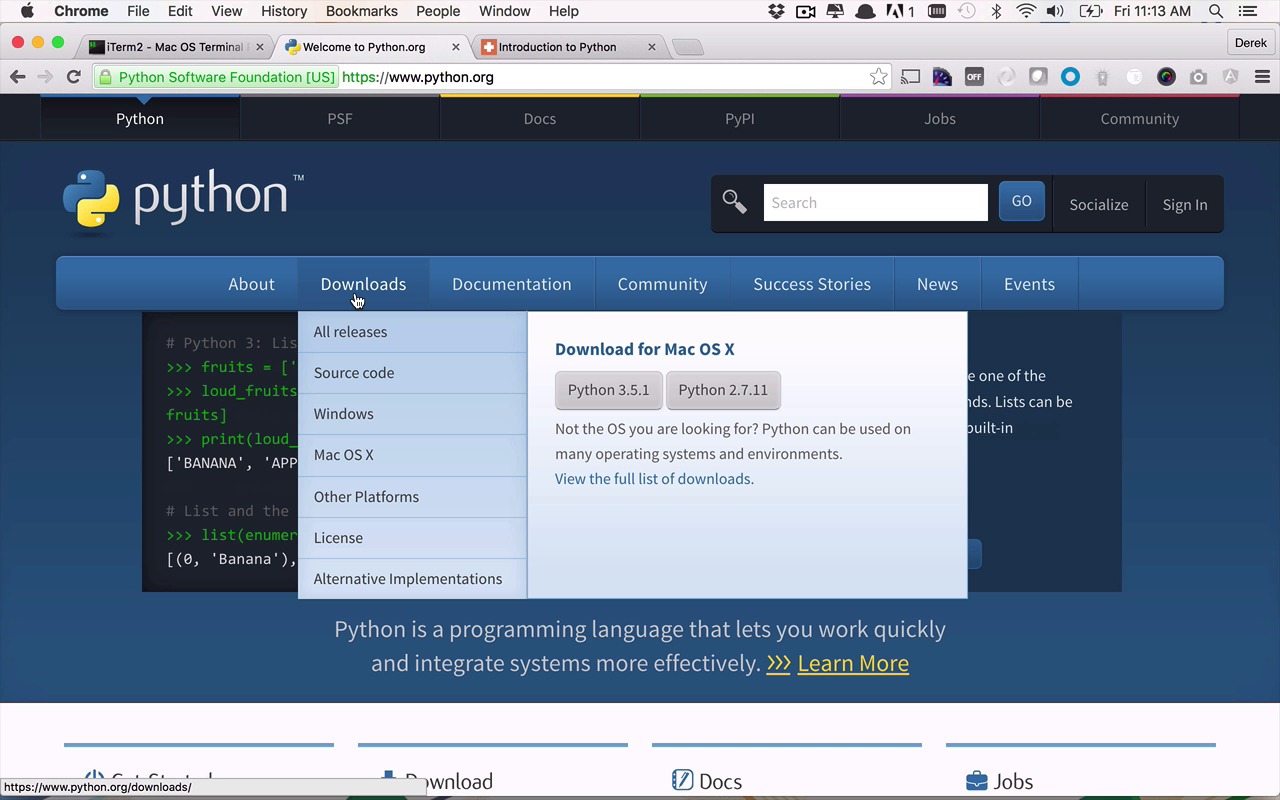 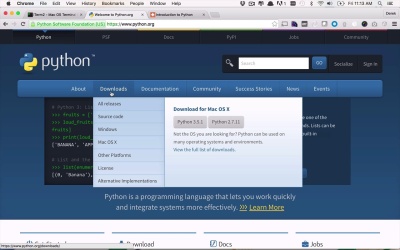 In order to follow along in this course, all you really need is Python 3 and a command shell. Most systems already have some form of Python installed, but in this lesson I’ll show you where to find Python 3 if you don’t have it already.

Now before we can actually start handling some data in the world of Python we have to make sure we have a development environment set up. Now I'm not gonna go through the ins and outs of all that stuff. Because I'm gonna make the assumption in this course, since it's not really the introduction or 101 style course, that you already have Python and you've already installed it. And if you haven't and you're not really familiar with Python yet, then I will show you a couple resources that you can use to kind of bring yourself up to speed at least with the basics of the language. Because that's gonna be very important and foundational to be able to move on to become more of an intermediate developer in the world of Python. So the first thing that I wanna do is I wanna show you a couple things that I'm gonna be using. So you're definitely gonna be needing a terminal. Now you can definitely use the built-in terminal on whatever platform you're using. So you could be using the command line or PowerShell on Windows. You could be using the built in terminal in Mac if you want but I'm gonna be using iTerm specifically iTerm2. I happen to like this terminal so I'm gonna be using it but you should feel free to use any one that you want. Also, because we are using Python, we're gonna need to have that installed. And I'm trusting at this point you already have that installed. But if for some reason you don't, then you can head over to python.org, and follow the Downloads instruction, to get the appropriate version that you're going to need for your platform. Now as you can see here the latest version of Python 3 is 3.5.1. And the latest version of Python 2 is 2.7.11. Now I'm not running the absolute latest. But if you're somewhere close to those versions then we're not gonna be doing anything that's completely new to just those specific versions. But I would be sticking with 3.5 in this course. That's the one that I'm going to be using, or at least 3. So I believe I'm running 3.4 at the moment but so you should be using 3 for this. For the most part you should be able to get by with 2, 2.7. But, if you wanna be running along with me then I will be running a version 3. And like I said before if you are new to the world of Python and you're not sure about setting all these things up or how to get started, then you can definitely head over to Tuts+. I've got a number of different Python courses up there already. Python and Django. So you can go over there, and check out a lot of good tutorials and courses. Specifically the introduction to Python. This will take you through a lot of the basics and getting started type things with the prerequisites and how to install Python and get it up and running on your machine. As well as the basics of the interpreter and all the basic types and control flows and all that kind of stuff. So, really, in this course what we're gonna be focusing on is a step beyond these types of things. So, yes you can loop through collections and loop through ranges and all those sorts of things and deal with basic data structures like lists and dictionaries and things like that. But what I want to show you in this course is how to take a step beyond that and use some of the really cool built-in features of the language and the standard library within Python to do things a little bit more elegantly. Because as a beginner there's no problems and nothing wrong with maybe looping through everything and doing things like that. But you're probably, once you get out into the world of development in Python, you're gonna need to understand a couple more features and things that are out there, to be able to really fit in well with a good development team. So, those are the things that I'm gonna be working on with you. And as I mentioned before, I'm gonna be running iTerm, and that's gonna be my shell of choice. And as you can see, if I were to run Python -V, I have 2.7.9 installed that way and I also have alongside a Python 3 which I'm running 3.4.2 at the moment. So as I said before 3.5 is the latest, 3.5.1. If you're pretty close to that, somewhere in the upper 3s, you should be fine. So don't worry about it too much but this is gonna be my development environment. You can also feel free to run a text editor if you would like. As you'll be able to write these things within a text editor and then put them through Python or just write them right in the interpreter. That should be fine either way. So hopefully you have your development environment set up and you're ready to go. Let's get started.

Derek Jensen
Derek Jensen is a lifetime nerd that calls the Chicagoland area home. He is your typical family man that loves activities with his wonderful wife and three amazing children. He is huge sports buff (both playing and coaching) and loves football, baseball and basketball. He loves just about any technology he can get his hands on but spends most of him time on the server side of the world. His day job consists of writing highly transactional backend web services, data access layers, and n-tier applications using the .NET Framework in C#. At night, when he's not spending time with his family, he enjoys authoring Tuts+ Courses and creating ASP.NET MVC web sites and mobile apps for clients.
kreatived
×
1,200+ courses and ebooks
Design, code, video editing, business, and much more.
Millions of creative assets
Design templates, stock videos, photos & audio, and much more.