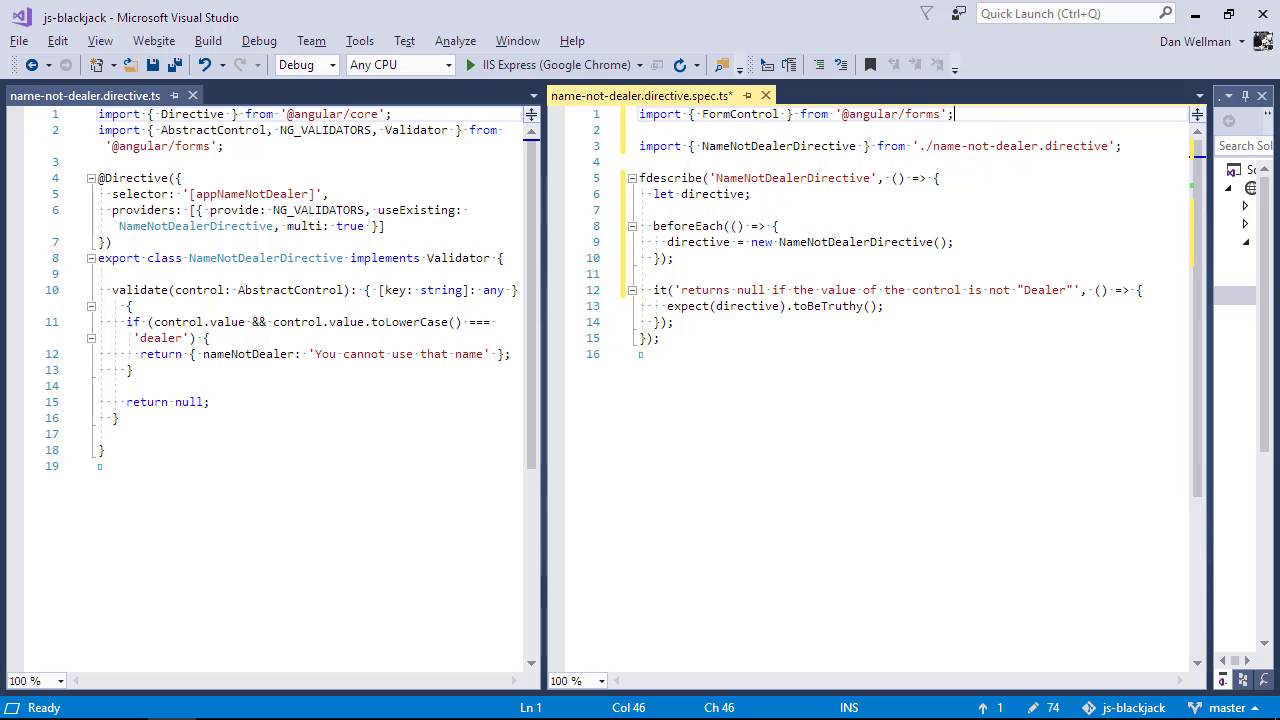 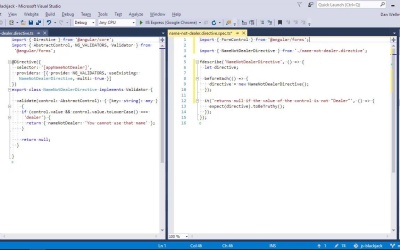 In this lesson you'll learn how to add unit tests for a custom directive that we have created ourselves.

Hi folks, in this lesson we're going to see how we can test directives, using the directive that we used earlier in the course which is used to check the Be Human player of the game hasn't try to use the name Dealer. As we created the directive using the CLI we should already have the spec for our ready. So let's open up the directive that we're testing and the spec file and get them arranged on screen side by side. And let's F describe the existing test. And let's just check that the test runs without us needing to fix anything up. Good, okay. So the directive test is already running, we don't need to do anything special to make the tests work. So we can jump straight into testing the directive. In the example test you can see that the directive that we want to test is new-ed up. So we get a new instance of the directive inside the test. We're gonna want that for all of our tests so let's just do that at the top of the describe Just like we did with the pipe in the last lesson. Okay, so let's update the tests now, so that we can test what the directive actually does. What does the validate method of the directive do? It returns null if the value of the control is not dealer. That's the easiest thing to test. Let's start with that. So we'll invoke the validate method of the directive, because this directive is also a validater and it exposes a validate method. But the methods requires that we pass in an instance of an abstract control. So we can't just pass any old thing into the method when we invoke it. We'll need to create a form control for the tests. And for that we'll need to import the form control class from Angular. So now in the test, we can create a control, set its value and pass it to the validate method of the directive So we create a new control using the phone control constructor. And we can then set the value of that control using the set value method. We can then pass the control to the validate method of the directive and store the return in the result variable and we can then check that the result variable contains the value no. So let's go to the browser, and see if it works. And we can see that it does. So now we need to test that an object is returned with an appropriate error message if the name is dealer. And it shouldn't matter if the string is lowercase. So we just need to update the assertion part of the test now. To be fair, the test isn't that much more complex than the first. It's just that we check a little more in the assertion. But that's basically it. We tested the directive to the Macs, and there is nothing much more we can do here. Let's just check the test is passing. And we can see that both tests are passing, so both the success and fail conditions of the validate method are both thoroughly tested. So in this lesson, we saw how easy it is to unit test a directive. We simply create a new instance of the directive, and in this case we then invoke its validate method parsing in the required arguments to test that the return value is expected under different conditions. Of course, not all directives are validators. In this case we would still create an instance of the directive, we just invoke different methods on it, depending on what the directive actually did. Thanks for watching.